The Windows 10 October 2020 Update (version 20H2) continues its slow but steady growth in AdDuplex’s latest survey for the month of February. In the pool of over 80,000 PCs surveyed by the ad network this month, 20% of them were running the latest version of Windows 10 (up 3.2%).

The Windows 10 May 2020 Update (version 2004) remains the most popular version with a 41.8% usage share, followed by the November 2019 Update at 26.8%. Earlier this month, Microsoft announced that the May 2020 Update was ready for broad deployment, meaning that all PCs running older versions of Windows 10 can now install it safely. 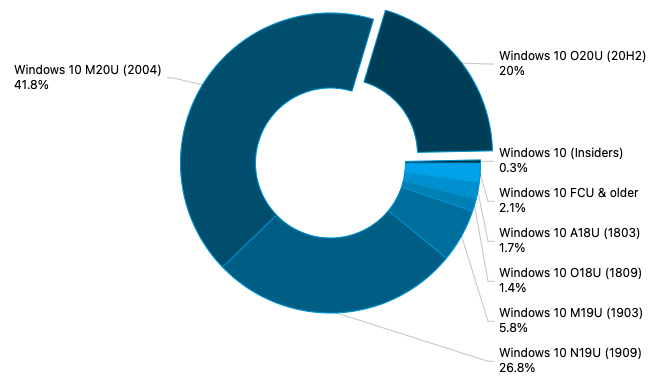 As Windows 10 version 20H2 continues to grow, Microsoft allowed last week Windows Insiders in the Beta channel to download the first preview build of Windows 10 version 21H1, to be released later this Spring. 21H1 will be another service-pack like update with improvements for Windows Hello and existing security features, and it should be followed by a more substantial “21H2” update later this year.

Are you already currently running Windows 10 version 20H2 on your PC, or are you using older or newer versions of the OS? Let us know in the comments below.