It’s now been two weeks since Microsoft re-released the Windows 10 October 2018 Update, a little more than a month after the company had to pause the rollout due to unforeseen critical bugs. To avoid further issues, the Redmond giant said that the October 2018 update rollout would be slower than usual, and this is somewhat confirmed by AdDuplex’s latest Windows Devices Statistics report.

According to ad network, this is indeed a “very cautious release” as only 2.8% of Windows 10 users in AdDuplex’s sample are currently running the October 2018 update, compared to 89.5% users still on the April 2018 update. As usual, keep in mind that AdDuplex’s numbers only take into accounts PCs running Microsoft Store apps using AdDuplex ads, so that's not a completely accurate picture of the Windows 10 ecosystem. 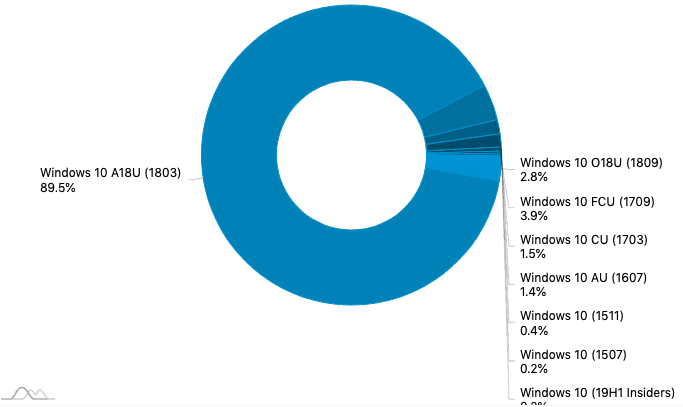 AdDuplex also published new data about the Surface family of devices today. Since its release in August, the brand new Surface Go is already the 5th most popular Surface device in AdDuplex's realm. It  starts with a 7.25% share, and it seems about to pass the 2015 Surface 3.  The Surface Pro 6, which was released last month along with the Surface Laptop 2 is already above the 5% mark, while the Surface Laptop 2 lags behind with a 0.77% share.

The original Surface Laptop currently sits between the Surface Pro 1 and 2 at 3.32%, and it does seem that the old notebook form factor isn't very appealing compared to 2-in-1 tablets like the Surface Pro and Go lines. Even the Surface Book 2, the most powerful Surface mobile PC is still a niche device with a tiny 2.87% share. The Surface line of devices has become much more diverse over the years, but it definitely looks like Surface Pro tablets remain the most popular products in the family.