5 tech companies including Microsoft hold $500 billion in cash, most of it offshore

Microsoft has managed to remain in the company of the tech elite, even as the aging software giant continues to shift its focus while expanding and contracting its portfolio of services and products over time to meet market trends.

From “Most valuable” tech companies to “best company to work for,” Microsoft’s brand has graced the top 25 of most list and thanks to a study pointed out by Stock Market Today, the company is adding its name to yet another elite list.

Analysts within the Moody’s rating agency note that Microsoft is a member of a group of five technology companies that have amassed and are hoarding roughly half a trillion dollars. According to Moody’s, Microsoft, Apple, Alphabet, Cisco and Oracle made up $504 billion of the total $1.7 trillion US companies brought in at the end of 2015.

As Stock Market Today points out:

The figures underscore how cash has become concentrated in a handful of companies, many of which have left earnings outside of the US to avoid the hit from repatriating profits under the country’s complex tax code.

Analysts with the rating agency said that overseas cash, worth $ 1.2tn last year, would probably remain there as the US election looms. Companies are instead expected to deepen their reliance on debt, issuing bonds to finance shareholder returns and mergers and acquisitions.”

As expected, Apple accounts for the majority portion of those off-shore profits with $216 billion in its cash reserves, most notably, having 93 percent of that holding placed overseas or internationally. The charming appeal of hoarding that much cash off-shore has its benefits and drawbacks for most US-based technology companies. Holding that much money overseas allows for easier international investments while also incurring little to no tax impositions. However, analysts at Moody’s have noticed, “the rising cash piles mask a rapid increase in debt. For the first time since 2012, cash, short-term investments and liquid long-term investments slipped below debt maturities due over the next five years.” 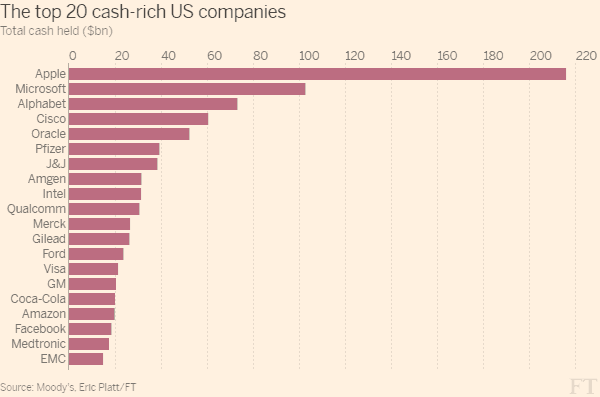 Despite the rise in debt and slumping global economies, it doesn’t appear that the elite five will be bringing their cash reserves stateside anytime soon. Rather Microsoft, Oracle, Apple, Alphabet, and Cisco will re-invest in international markets and businesses to get the most bang for their buck while leveraging issued bonds to appease shareholders.