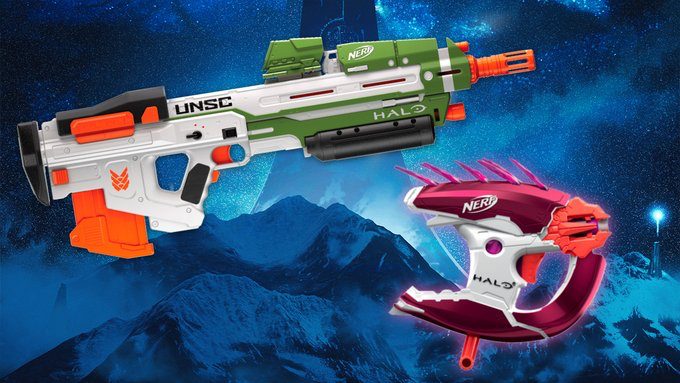 343 Industries has partnered with with Hasbro to release two Halo-branded Nerf blasters. The three toys—the Nerf Halo MA40 Blaster, Nerf Halo Needler MicroShot, and the Nerf Halo SPNKr Microshot—are expected to make its way to stores in the U.S. and U.K. in the fall.

The blasters will be perfect for kids and fans of the Halo series, and could serve as a compliment to the upcoming Halo Infinite game that’s also expected later this year. According to John Friend, Head of Consumer Products at 343 Industries:

“Halo consumer products licensees and categories have expanded significantly since the launch of Halo 5: Guardians in 2015. Halo has grown to become one of the leading sci-fi transmedia and entertainment franchises through the release of our many books, comics, apparel, and so much more. Hasbro is the perfect partner to bring the heroism of the Master Chief to fans of all ages and expand the Halo Universe to a new generation.”

Hasbro explains in its press release that the toys are expected to reach the shelves of “most major retailers” in the U.S. and U.K. in the fall, with other markets coming in the following year. These Halo-branded blasters will also join other video game inspired products from Nerf, including toys from Overwatch and Fortnite.

What do you think about a Halo-branded Nerf blaster? Would you buy one? Share your thoughts below.