While “shares” and “retweets” have become shorthand for social media citations, there exist a world still that requires professional citations and Microsoft’s Edge browser has just made that process a little bit easier.

Microsoft just announced that its Edge browser is previewing a new “Citations” feature which should, “give students a better way to manage and generate citations as they research online.”

Yes, Wikipedia can be a previable cornucopia of citation and links for research, however, there are times when going directly to source is more beneficial and it seems the “Citations” feature in Edge is looking to further streamline the research process.

According to post on the Windows Blog, the “Citations” feature works in conjunction with Edge’s “Collections” section where saved websites and articles now automatically generate citations for students and researchers to reference later. 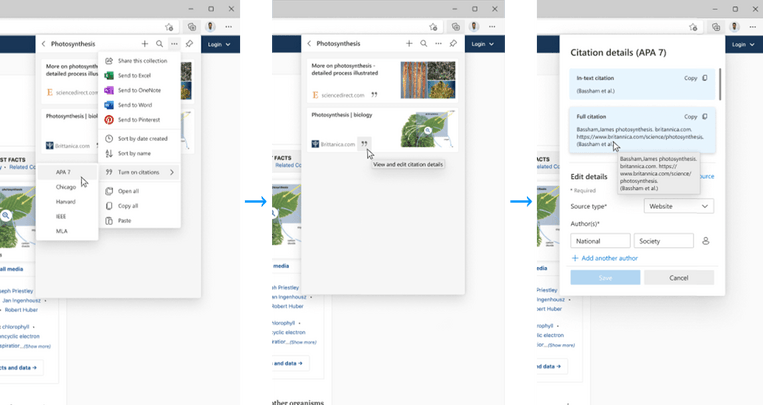 As magical as it may sound for first year college students or AP high schooler’s, “Citations” is in early preview and comes with some caveats.

Note: Currently, automatically extracting and creating citations is supported for a fixed number of academic websites and research journals. We may expand that list in the future. For sites that are not supported, users can manually add the required info to generate citations.

Right now, the feature is only available in the Microsoft Canary Dev Channel and only for versions 95 and above, but it’s still a relatively easy item to access.

Within Edge Collections now resides a toggle for “Citations” that’s under the ellipses. Citations are viewable when selecting the quotation mark icon on the articles saved in their Collections.

Ideally, Microsoft will roll this out soon to more Edge users. Citations are a huge part of research in academia and Microsoft looks to be tackling one of the most inconvenient steps in online research with this new Citations feature.