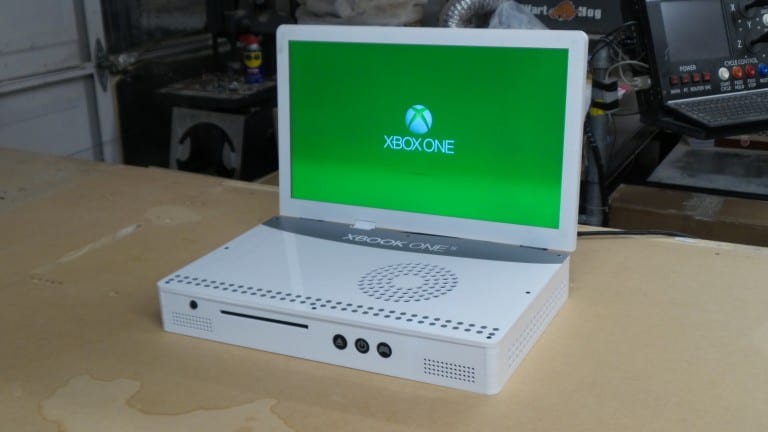 Known for creating modded consoles such as the PlayBox (Playstation 4 and Xbox One in a single case) and the Xbook One, Ed Zarick is happy to announce the latest addition to his Frankenstein collection. He was happy to get his hands on the Xbox One S released just earlier this month. Eager to take it apart, his tinkering has developed a similar Xbook to its predecessor.

The Xbook One S laptop was downgraded from the 22" LCD display on the original. This turned it into a more portable option. Because of the downgrade, the resolution is set at 720p which is just perfect for the smaller screen. The slim device has the power to unlock that 4k Xbox One S resolution by plugging it into the larger monitor or television.

The front of the system has two speakers on each side and a small joystick at the top of the left. This is how you can turn on and off the LCD monitor. Conveniently enough, a TV remote is also included with the device that lets you fully control the settings.

Instead of being fully portable on rechargeable batteries, Zarick opted for a lighter decision that allowed for hooking your Xbook One S to the power supply and start gaming.

The Xbook One S is built to order. That is to say that Zarick will only build them as orders come in. To purchase a 500GB system, it will cost $1,495 plus shipping fees. Upgrading to the 1TB will cost only $50 more. If you feel like cutting the costs of production, you can ship in your own Xbox One S console to have it modded for just under $1,200.

Don't have that kind of cash? Ed is hosting a giveaway for the Xbook One S used in his latest Youtube video. Even the shipping is free! Retweet the tweet below to be entered into the random drawing.

It's worth noting that Ed Zarick isn't affiliated with Xbox or Microsoft officially. He's just a handy man with a passion for creating. Learn more about him and his unique devices at EdsJunk.net