Windows has long been considered the most appropriate platform for productive work. Prior to Windows 10 though, the core desktop experience had gone without major innovation for several years. Changes between Windows XP and 8 focused predominantly on visuals. While Windows 7’s new taskbar and window management capabilities aided productivity, they didn’t do much to alter the desktop’s purpose.

With Windows 10 and its “do great things” marketing campaign, Microsoft finally went back to work on the Windows desktop. Coming with the reinstatement of the Start menu, the company began adding new features to the shell. One of those in particular stood out for me, because it’s already a core component of rival desktop environments: Virtual Desktops.

The concept behind virtual desktops is simple: you can setup multiple independent workspaces to house different sets of windows. It’s something which will already be familiar to most Linux desktop users. Windows formerly required specialist, often cumbersome third-party software to enable something similar, before Microsoft added the capability natively with Windows 10. 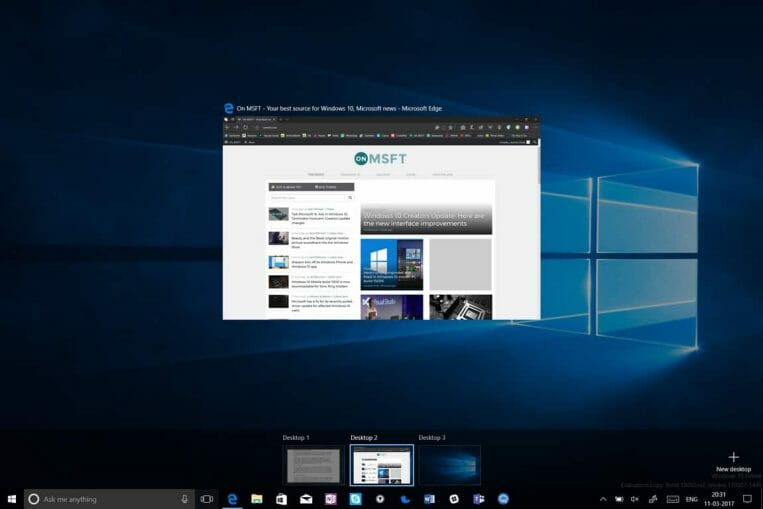 When you create a new virtual desktop (press Ctrl+Win+D), you’re given a blank canvas to open a new set of apps and windows. The apps you had open on your first desktop aren’t visible on the new one and won’t appear on the taskbar. Likewise, any apps you open on the new desktop will be invisible on the original.

You can switch between virtual desktops using the Ctrl+Win+Left and Ctrl+Win+Right keyboard shortcuts. You can also visualise all your open desktops using Task View – either click the icon on the taskbar, or press Win+Tab. This gives you a handy overview of everything open on your PC, from across all your desktops. Hover over the desktop icons at the top of the screen to see the contents of each one. There’s buttons to add and close desktops if you’d rather not use the shortcut keys.

Enough of the feature recap – here’s why I place so much value on virtual desktops. I work at my desk for eight hours each day. During that time, I will usually work on multiple independent projects. Throughout the time, I’ve also got a set of open apps which I review during breaktimes and spare moments – OneNote, Outlook and a set of personal Firefox tabs. These are my primary windows, which aren’t connected to my work but are nonetheless referred to throughout the day. 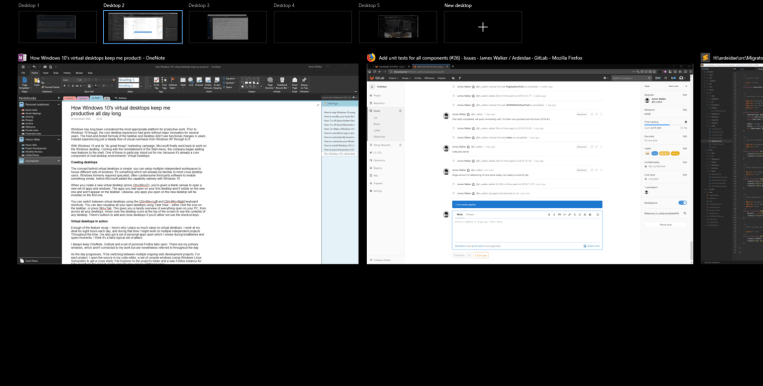 As the day progresses, I’ll be switching between multiple ongoing web development projects. For each project, I open the source in my code editor, a set of console windows (using Windows Linux Subsystem to get a Linux shell), File Explorer to the project’s folder and a new Firefox instance for tabs specific to the project. Some projects may require additional apps.

I might work on two or three projects in a day and I don’t tend to close anything after it’s been opened. Many projects are interlinked, so I might need to refer back to something I worked on earlier in the day even after I switch project. With so many windows open, keeping everything organised would get cumbersome without virtual desktops.

The virtual desktop solution streamlines my entire workflow. Each project gets its own virtual desktop, housing only its windows. I can rapidly refer to other projects by just switching virtual desktop, without having to minimise or switch between apps. No matter how many windows I open on a desktop, they’re isolated and won’t appear anywhere else – keeping things controlled and avoiding the cognitive overload of having lots of visible tabs and windows.

On my first desktop, I keep my personal browser instance, ready to switch back to in the spare moments of the day. When on that desktop, I don’t see any work-related apps open, which makes it easier to disconnect for a moment and check my favourite blogs and forums.

Of course, some apps are useful to have on every desktop. One such example is Spotify. Although it’s not directly work-related, it’s useful to have Spotify available on all my desktops. Otherwise, I’d have to spend time switching to another workspace just to change tracks. A similar case is Outlook – I keep my inbox accessible on every desktop, to avoid unnecessary context-switching. 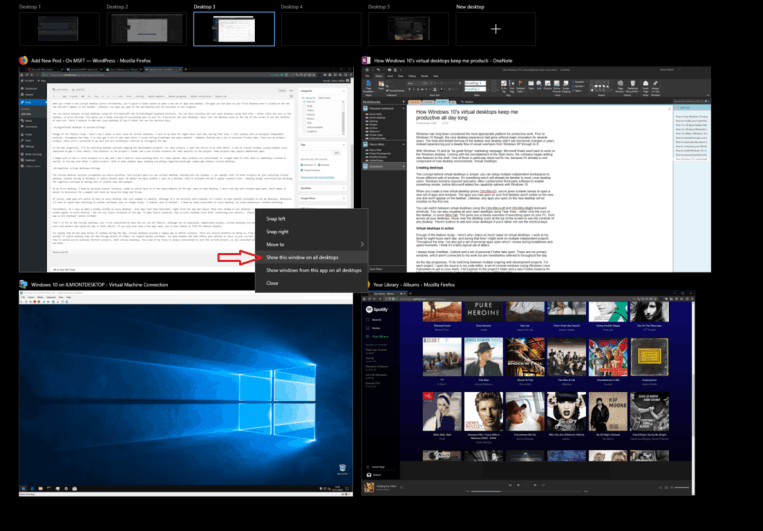 That’s it for me and virtual desktops, but I’d be interested to know how you use the feature. Although not an especially complicated concept, virtual desktops are more likely to be useful to power users and workers who spend all day on their device. If you only ever have a few apps open, you’re less likely to find the feature helpful.

For people like me who open dozens of windows during the day, virtual desktops provide a simple way to define contexts. There are several benefits to doing so, from faster window switching (it’s quicker to switch desktop than Alt-Tab through dozens of items), to reduced mental overheads. Too many windows and tabs affect your ability to focus on your current task – particularly when they’re spread across multiple distinct projects. With virtual desktops, the scope of my focus is always constrained to just the current project, as all unrelated windows are hidden out of sight and mind.