How-To: Make a Windows 10 screen recording without installing any software

Making a screen recording is a fairly common task. Creating a video of your desktop can be the simplest way to demonstrate a problem, offer help to a friend or family member or simply record the steps taken to solve an issue.

Previously, you had to install third-party software to record your screen in Windows, which could be often be costly and complex. Fortunately, Windows 10 comes with a simple solution preinstalled – if you know where to look.

Windows' built-in screen recording software is part of the Xbox Game Bar. It's called Game DVR and is predominantly aimed at gamers creating gameplay videos. However, there's nothing stopping you from repurposing Game DVR as a general desktop recorder.

To get started, make sure Game DVR is enabled – on most new PCs it should be, although some older devices won't support the feature. Open the Settings app to the "Gaming" category. On the first page, "Game bar," check the "Record game clips, screenshots and broadcast using Game bar" toggle is turned on.

While still on this page, also check the "Start/stop recording" shortcut under "Keyboard shortcuts" – you'll use this keyboard shortcut to begin and end your video. It defaults to Win+Alt+R, but you can change it to something else if you'd prefer. 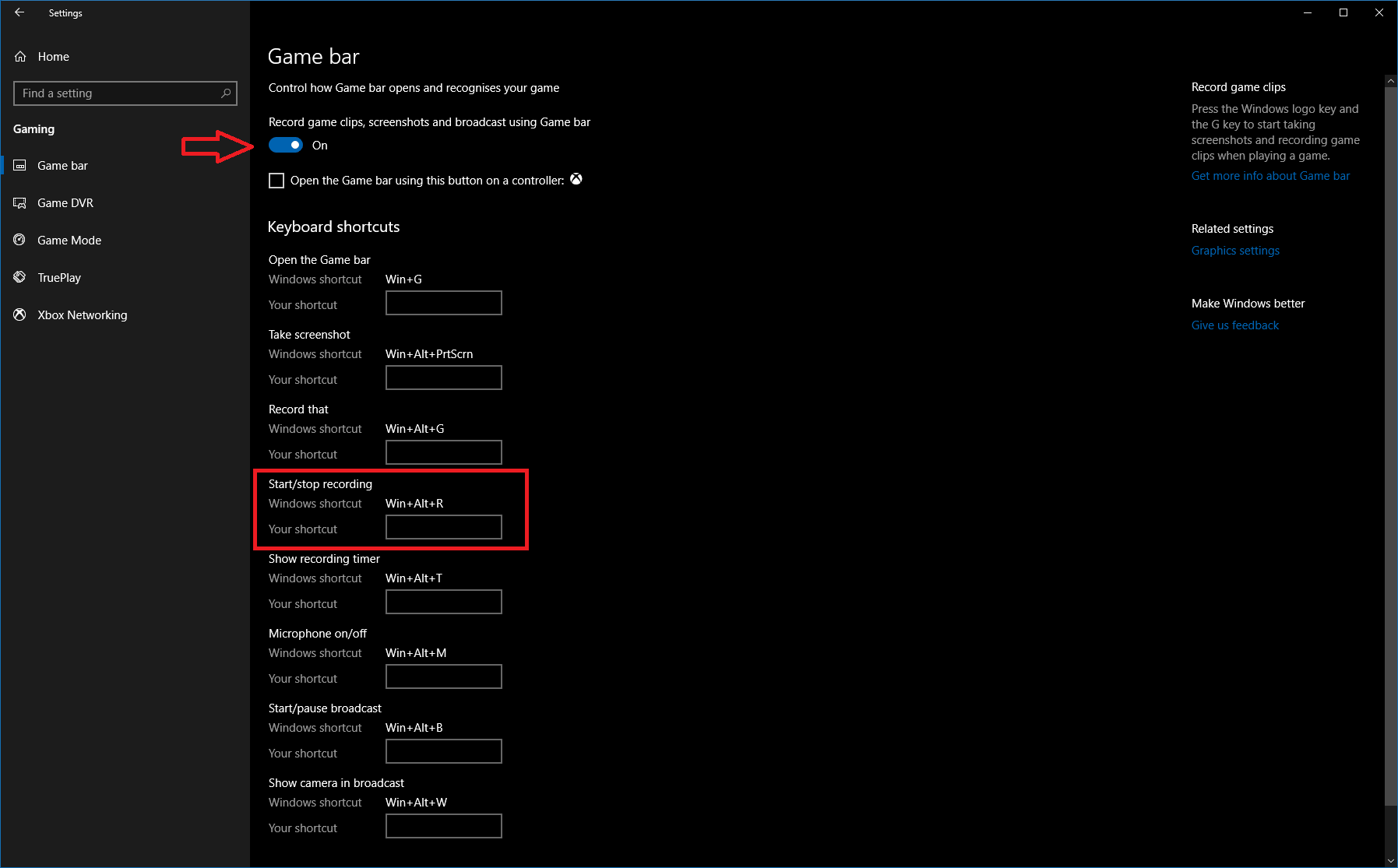 Next, use the left navigation menu to switch to the Game DVR page. Here, you can change settings specific to the recording feature. The Background Recording section isn’t relevant if you're not a gamer, so we'll ignore it for now.

Scroll down the page and you can control the audio and video settings of the recording. Of particular note is the toggle button to "Record audio when I record a game" – turning this off will disable all audio recording. With the toggle on, you can use the "Turn on mic by default when I record" button to control whether microphone recording is enabled – handy for live voiceovers. The two volume sliders let you balance microphone volume with that from apps on your system. 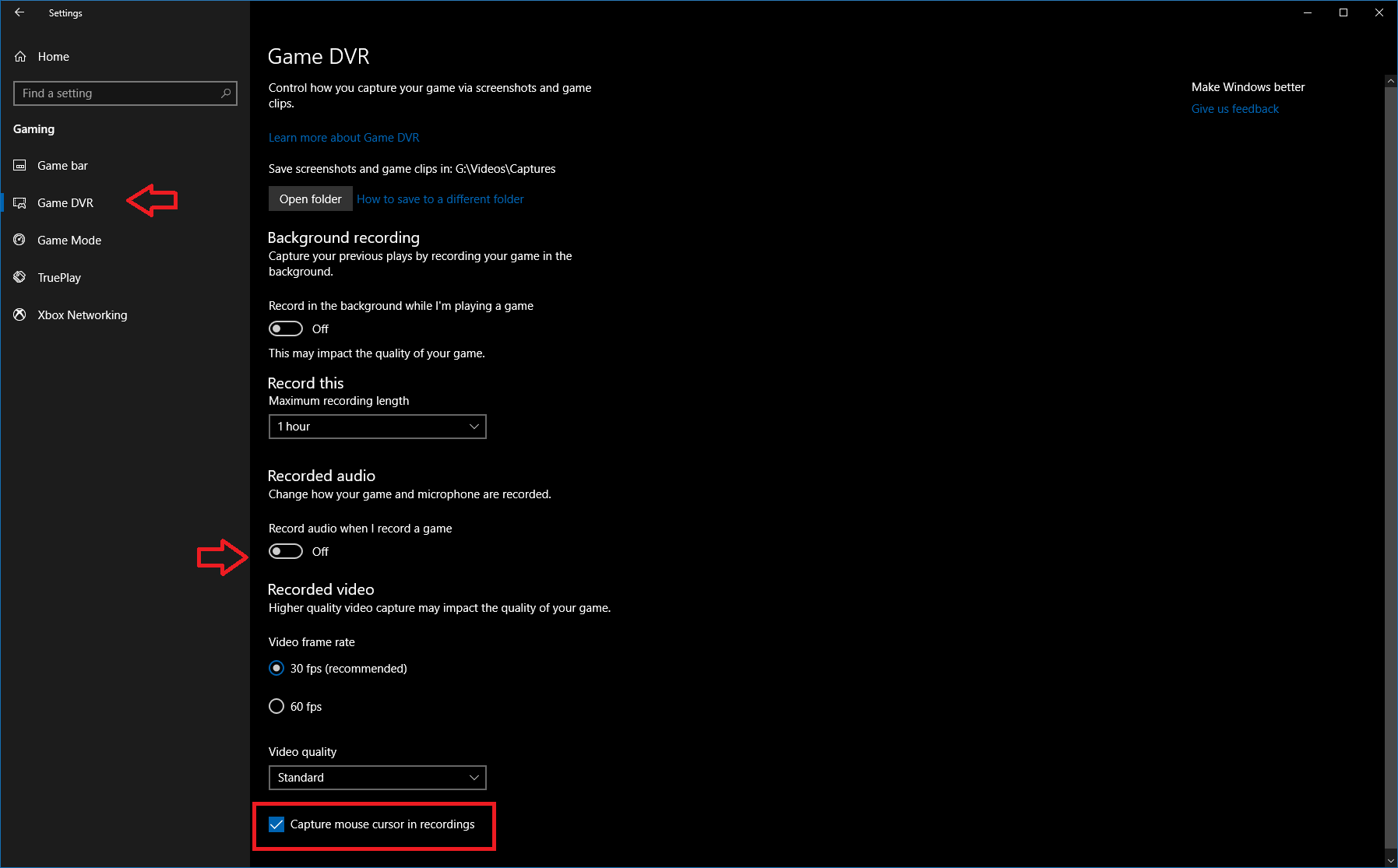 At the bottom of the page, you can adjust video quality settings. The defaults here should be fine for general-purpose desktop recordings. If you have a powerful computer and want higher quality recordings, you can adjust the video quality with the dropdown menu. There's also the option of making 60fps recordings – this makes the resulting video much smoother, but is more resource-intensive. For most desktop screen captures, you're unlikely to notice the 60fps difference.

One more setting of note is the "Capture mouse cursor in recordings" checkbox – it should be self-explanatory, but for desktop screencasts you'll probably want to make sure it's enabled.

With the settings finalised, you're now ready to start recording! Because this is a gaming-oriented featured, getting going can be a little cumbersome.

First, you have to convince Windows that you're actually in a game. To do this, you need a window open on your desktop. If you want to record an application, you can just use that window. Otherwise, open a dummy app to start the recording. We'll use Notepad. 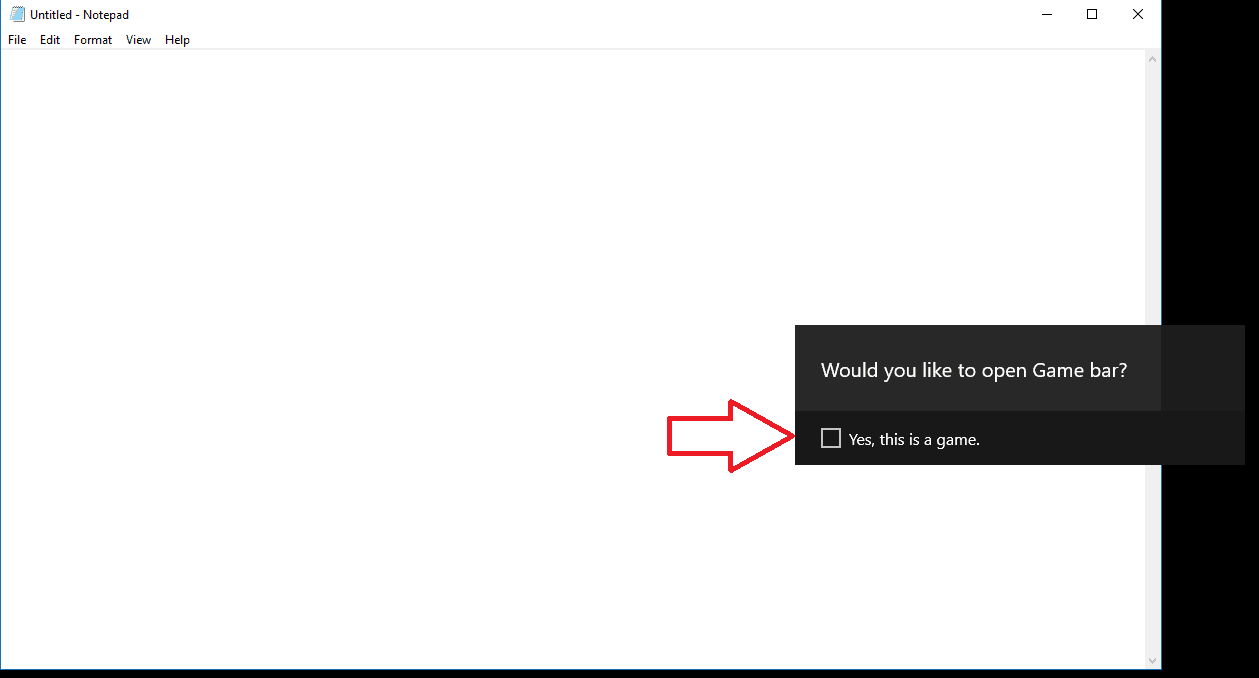 Now press the Win+G keyboard shortcut. After a moment, you should see the Xbox Game Bar overlay appear on the right of your screen. Click the "Yes, this is a game" checkbox. You should now be able to use the keyboard shortcut you noted earlier (Win+Alt+R by default) to start and stop recordings. This will work each time you use the app, but you'll need to tell Windows it's a "game" again if you start recording with a new app in the future. 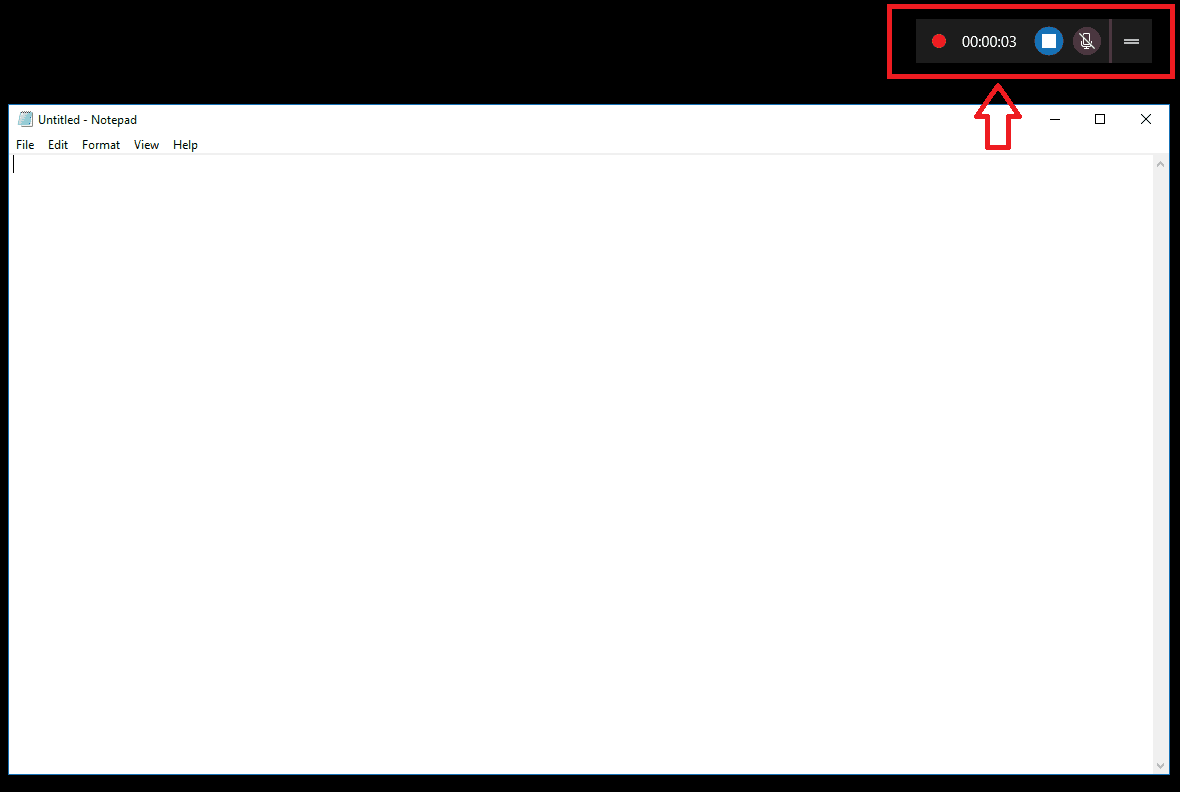 You'll know recording is active when a small timer appears in the top-right of your display. You can also adjust microphone settings from here and stop the recording. Once you're done, you'll find your video in the folder indicated by the Game Bar settings page – by default, this is the Captures folder inside your main Videos folder.

One thing to note is that starting a recording can initially take a few seconds. If you've clicked the "Yes, this is a game checkbox" and then pressed Win+Alt+R, recording should begin but it may take a few moments before the timer bar appears.

Xbox Game DVR's not your only built-in option for Windows 10 screen recordings. Users with NVIDIA or AMD graphics cards may already have an alternative installed. 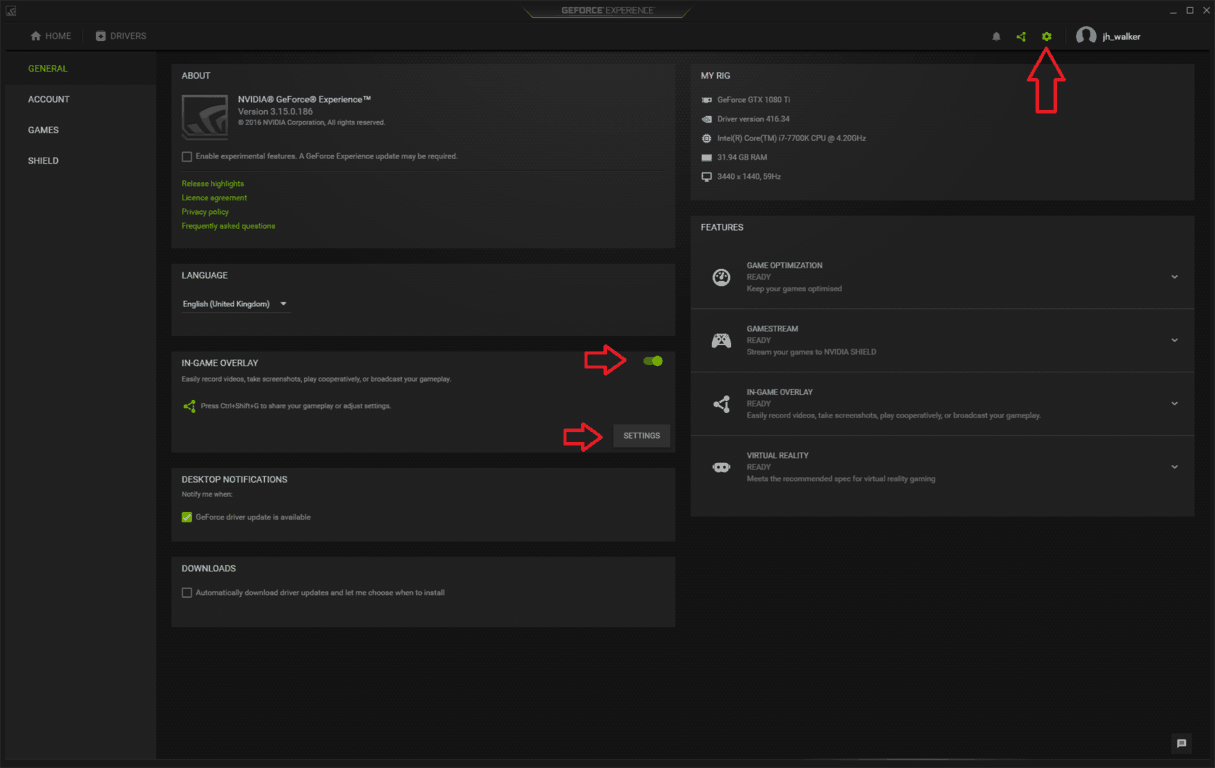 In the case of NVIDIA, screen recording is an integrated part of the company's GeForce Experience app, included with its graphics drivers. You can enable the feature by opening the GeForce Experience app and heading to the Settings page. Look for the "In-Game Overlay" panel and turn it on. 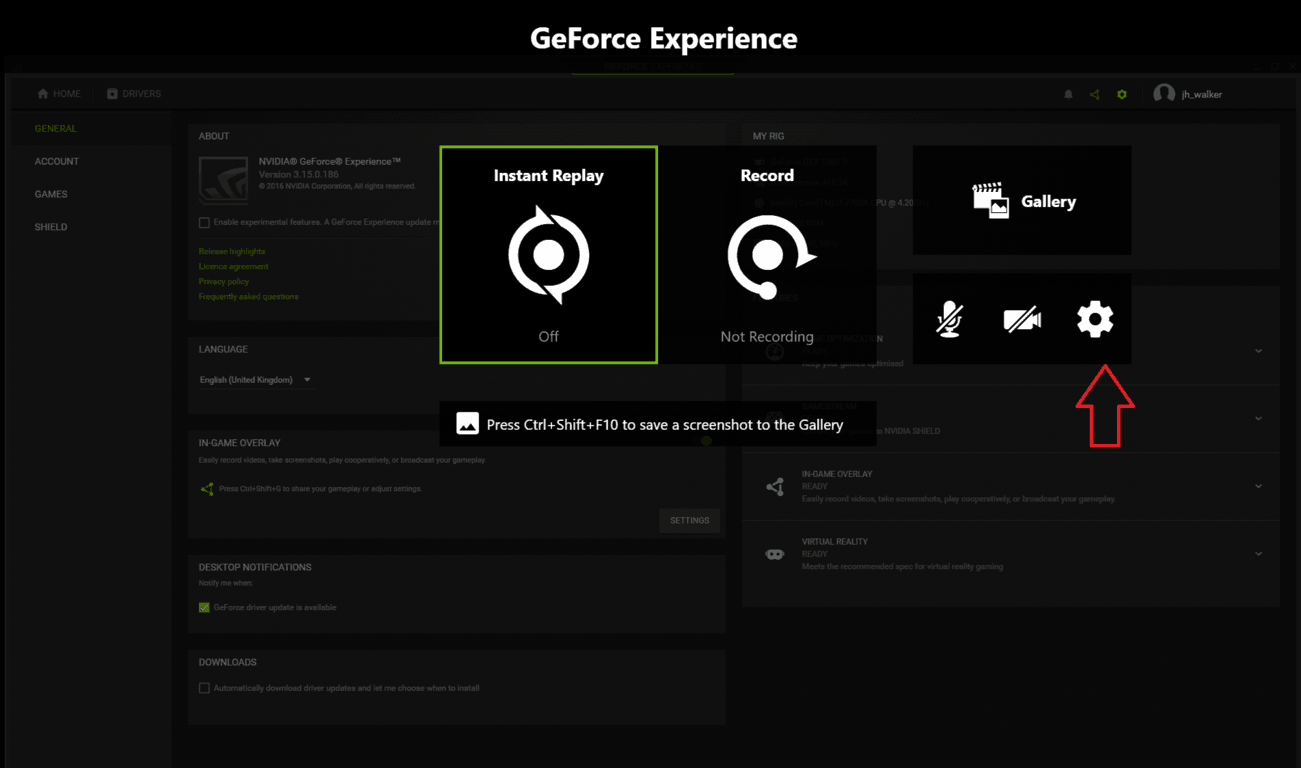 Next, click the Settings button to open the overlay's dedicated settings. When the overlay opens, click its own Settings cog icon. Scroll to the bottom of the menu and enter the "Privacy control" category. Ensure the "Desktop capture" toggle is enabled – otherwise, you'll only be able to make videos of fullscreen games. 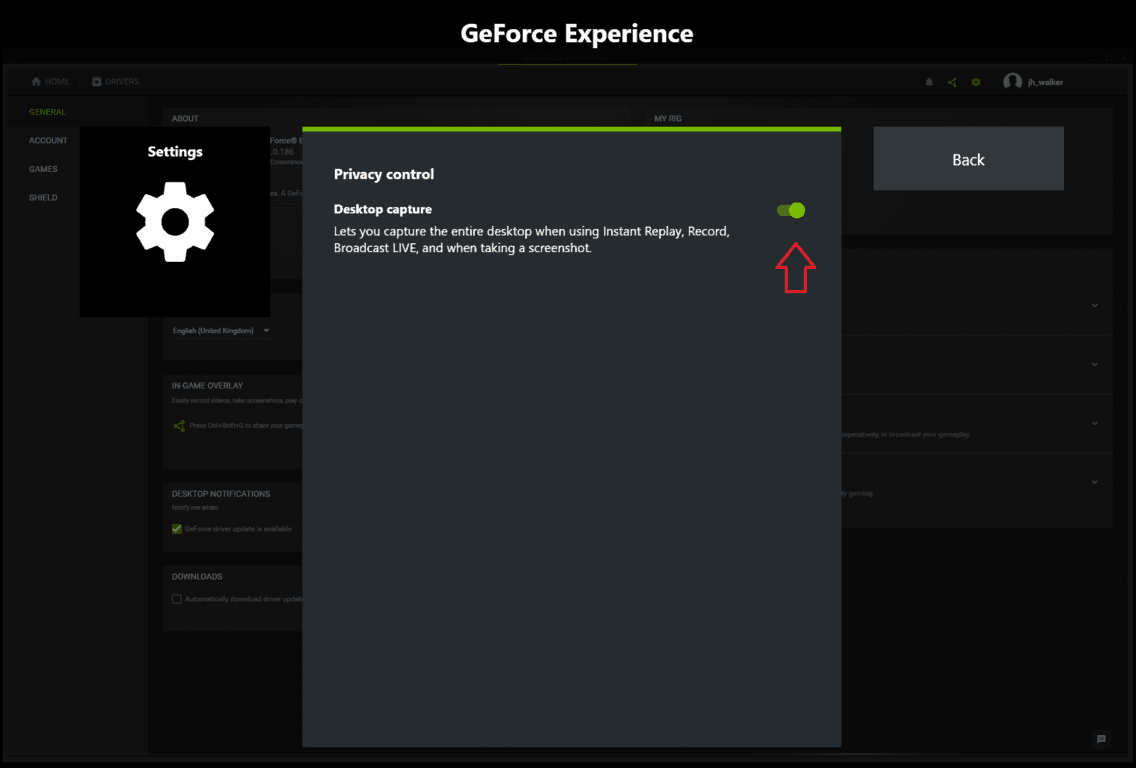 You can now start making screen recordings at any time with the Ctrl+Shift+F12 keyboard shortcut. This shortcut – and many other options – can be configured back in the In-Game Overlay settings menu. By default, videos will be saved to the "Desktop" folder within your Videos folder.

AMD also includes screen capture features in its graphics drivers. Known as Radeon ReLive, the capability was introduced with the company's Crimson series of drivers. To get started, open the AMD Radeon Settings app and click the "ReLive" tab at the bottom. From the settings that appear, ensure the "ReLive" and "Record Desktop" toggles are both on. You can now start recording using Ctrl+Shift+R, using the default settings – all of which are customisable from the ReLive screen. Videos will be saved to the location indicated in Radeon Settings.