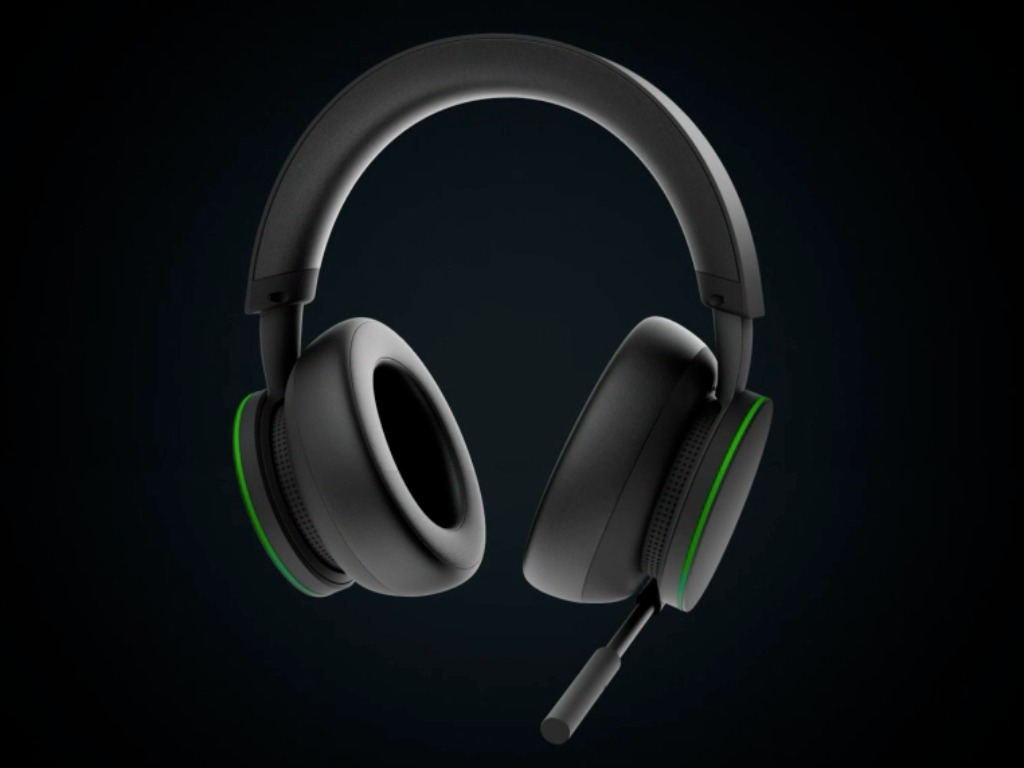 Microsoft’s new Xbox Wireless Headset started shipping last week, and at $99.99 it’s quite competitive compared to other gaming headsets from Razer, LucidSound, Turtle Beach, or SteelSeries. This is Microsoft’s first wireless headset since the release of the Xbox One Stereo headset, which used to be my headset of choice until last week.

The gaming headset market can look quite complicated for casual gamers: Some wireless headsets require dongles and can be quite complex to set up, many of them are also not compatible with all gaming consoles. You won’t be able to use Microsoft’s Xbox Wireless Headset on a PlayStation console, and it’s also important to note that the headset doesn’t include a headphone jack.

I’ve been using Microsoft’s Xbox Wireless Headset for a week now, and I have to admit that it didn’t really make a good first impression on me. A lot of reviews have already pointed out the unbalanced sound out of the box, with an overwhelming bass level that can mask some important audio details in games. You’ll probably need to mess with the equalizer to get more clarity, but I’ll have more about that below.

If you can’t really expect top-notch audio quality at this price point, the design of the Xbox Wireless Headset certainly deserves praise. The overall quality seems to match what Microsoft offers with its more expensive Surface Headphones 2 ($249.99), though features like active noise cancellation and touch and fingertip controls are missing on the Xbox Wireless Headset. 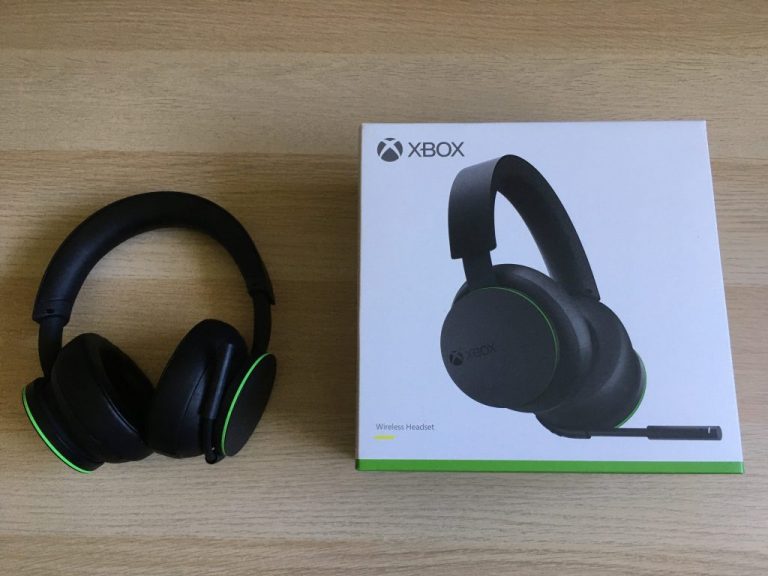 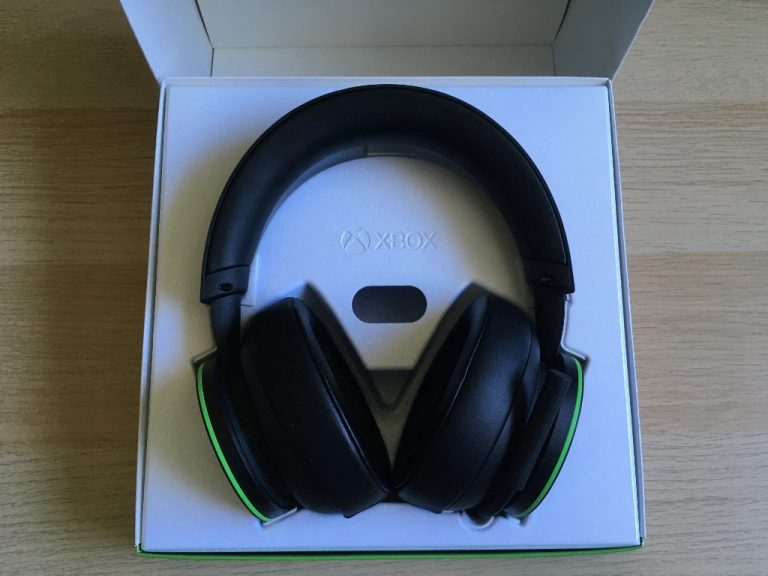 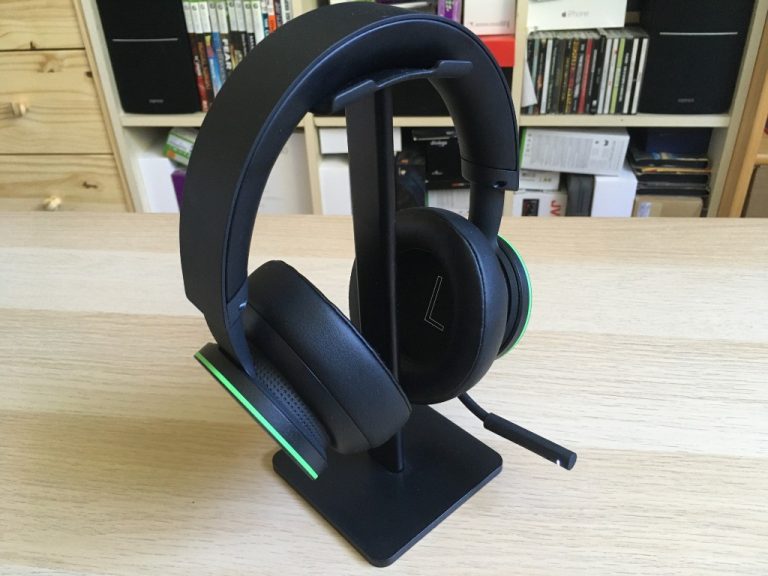 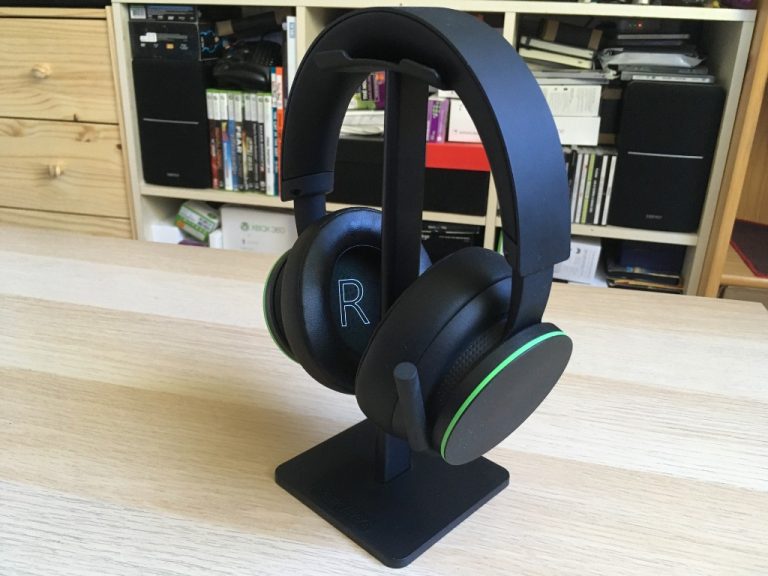 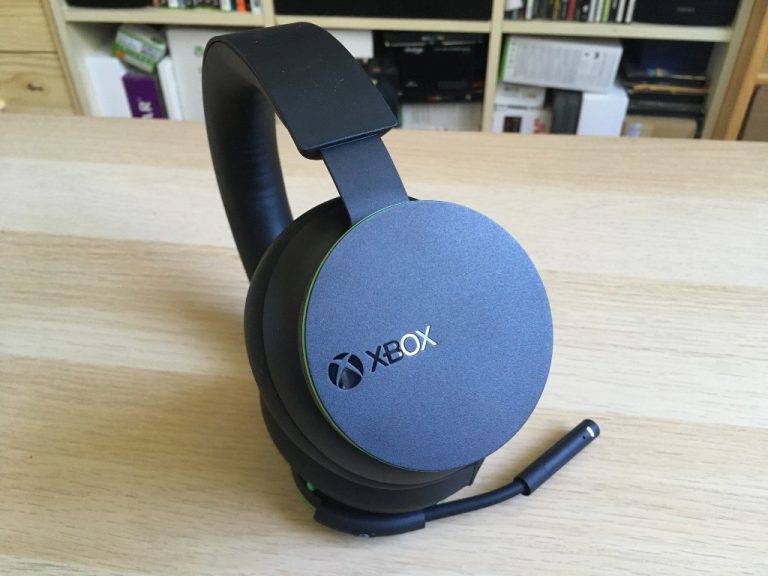 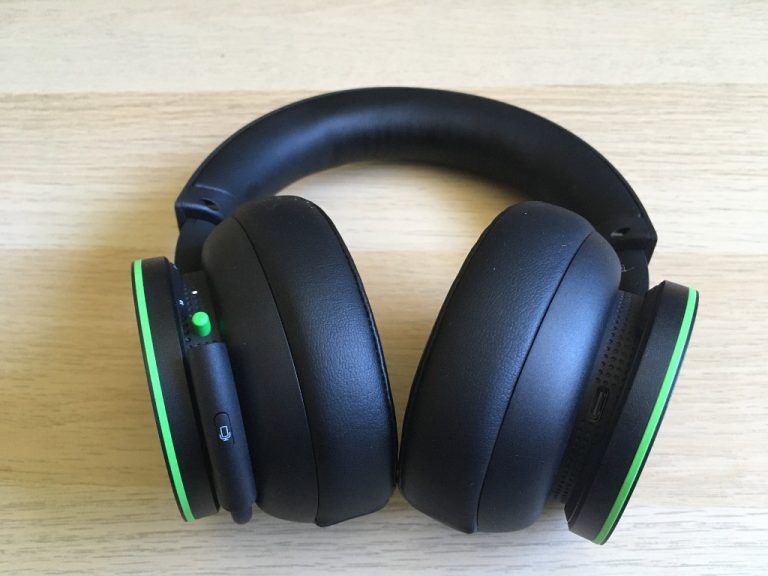 A simplistic but effective design

Microsoft’s Xbox Wireless Headset is pretty light overall (312g), and it comes with an adjustable headband and pretty soft earcups made of polyurethane leather. I’ve been able to use it for hours without any discomfort, and that’s personally one of my most important criteria for choosing a headset.

Just like Microsoft’s Surface Headphones, the Xbox Wireless Headset uses rotating earcup dials to change volume and game/chat balance. This is much more convenient than having to look for tiny buttons with your fingers, and I think this is really something that more gaming headset manufacturers should copy.

The Xbox Wireless Headset only comes with two buttons on the left earcup, a green power/sync button, and a mute button for the microphone. The adjustable mic is connected to the left earcup and is easily bendable, and it also integrates a useful LED indicator that turns on when the mic is active. 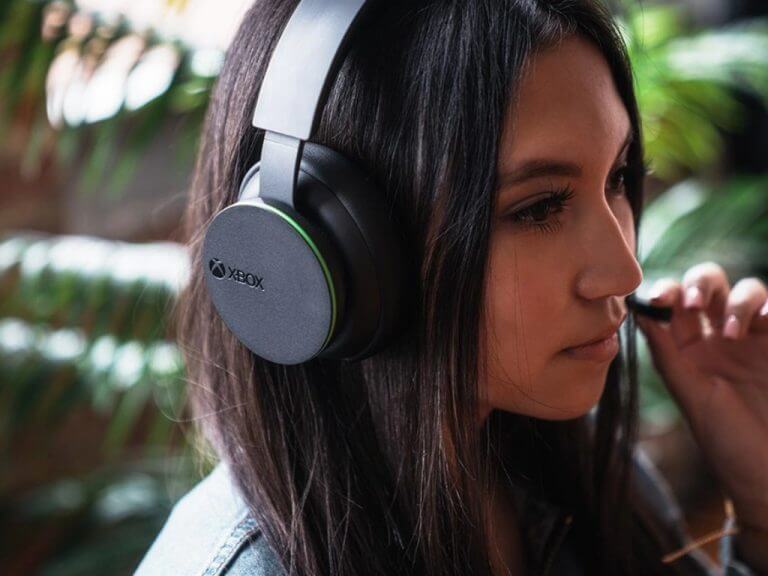 Overall, I really like the design of the Xbox Wireless headset, which actually doesn’t really look like a gaming headset when you bend the microphone around the left earcup. There are subtle touches of green around the two earcups, but I don’t think I would be embarrassed to use this headset in a work environment.

When Microsoft officially unveiled its Xbox Wireless Headset last month, the company said that it had "spent countless hours studying what makes for a great audio experience,” using the headset in audio testing chambers to understand how it reproduces audio in different room environments. Well, I'm afraid this probably won’t strike you immediately when you will turn on the Xbox Wireless Headset for the first time.

Personally, my first thought was that my old Xbox One Stereo headset had a more balanced and detailed sound, as the bass levels on the Xbox Wireless Headset were way too high for me. Loud sounds like gunfire and explosions in games like Call of Duty: Warzone didn’t sound good, and I quickly went to the Xbox Accessories app to make some changes in the equalizer. 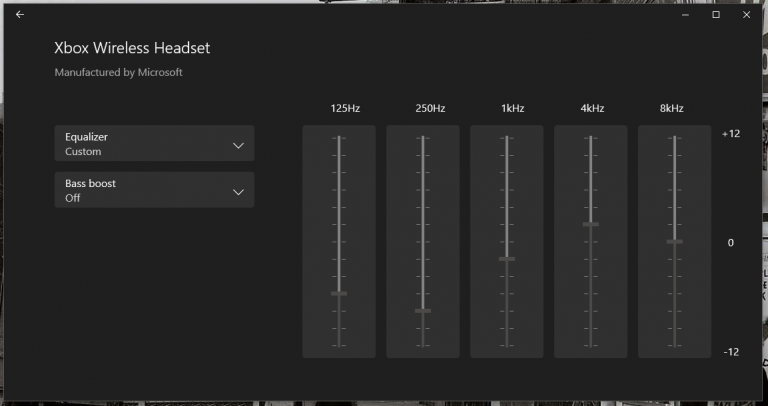 The Xbox Accessories app offers different profiles for Games, Movies, Music, or Speech, and there’s also a toggle for a “Bass Boost” feature that I've always kept turned off. Since I’m not an audio expert, I spent some time looking for better EQ adjustments, and I think I found something that really suits my tastes with the custom profile recommended by the YouTube channel GadgetryTech. I’ve been using these settings ever since and it makes a night and day difference, with just enough bass to enjoy my games and music.

Every Xbox Wireless Headset will come with a six-month license for Dolby Atmos for Headphones, which is a much better spatial audio technology than Microsoft’s own Windows Sonic standard. You can enable Dolby Atmos for Headphones on Console and PC by downloading the free Dolby Access app on the Microsoft Store, and a perpetual license for the spatial audio technology costs $14.99.

There are not a lot of Xbox and PC games that come with a Dolby Atmos mix, but notable examples include Gears 5, Call of Duty: Warzone, Cyberpunk 2077, Forza Horizon 4, and Dirt 5. Forbes’s John Archer has a more complete list of Xbox and PC Games with Dolby Atmos support over here. 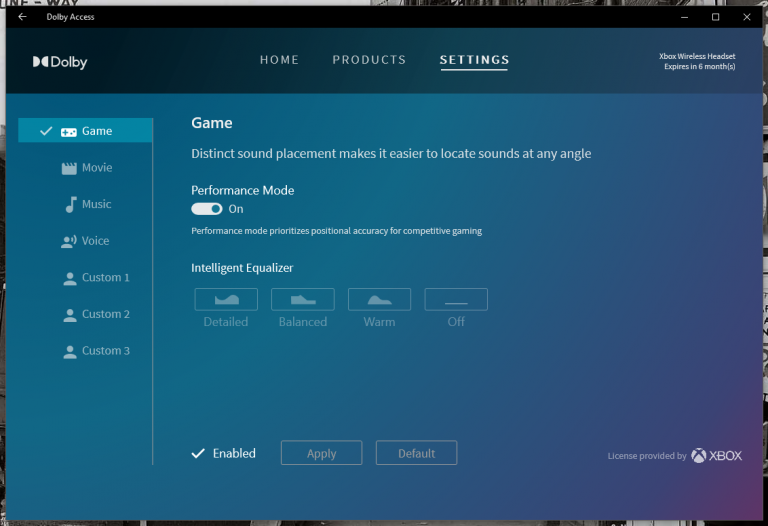 The Xbox Wireless headset comes with what Microsoft describes as "dual beamforming microphone elements that focus on speech audio vs. surrounding sound.” I’m no microphone expert, but after using the Xbox Wireless Headset for voice chats on Xbox Live and Discord for a week, all my friends told me that they could hear me loud and clear, and that’s what really matters.

The mic mute button is pretty convenient to use, and you can also adjust the brightness of your mic’s mute light in the Xbox Accessories app. The app also provides 3 different settings for Mic monitoring, which lets you control how much of your mic audio can be heard in your headset: The low setting will let a little bit of our voice be heard, and the high setting will allow your voice and environmental sounds to be clearly heard.

In the Xbox Accessories app, you can also turn on the Auto-mute feature that will automatically mute your microphone when you’re not speaking. The sensitivity ranges from Low (some sounds are muted) to High (most sounds are muted), and the light indicator will turn on every time your voice is being picked up. This feature seems to work pretty well, though I personally prefer to keep it turned off. 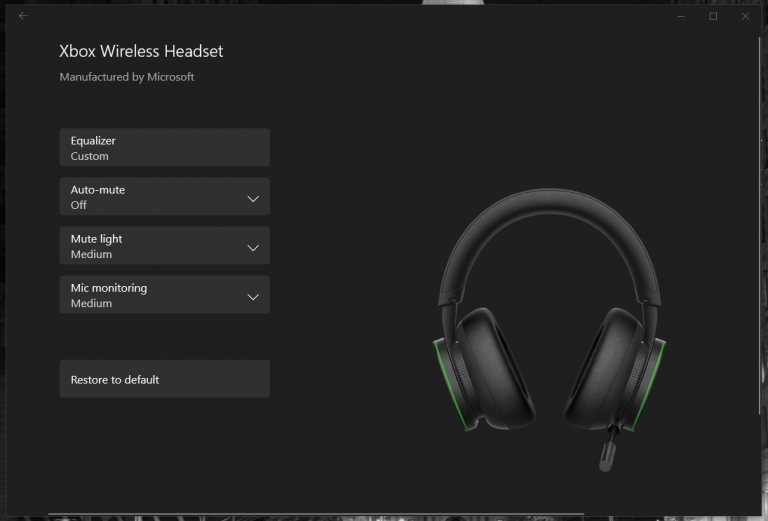 Be aware that once the Xbox Wireless headset is paired to your Xbox, turning the headset on will automatically turn on your console, and this can be quite annoying. Jason Ronald, Director of Program Management at Xbox recently said on Twitter that “this is currently by design, but we have heard a few requests for the ability to disable it.” As someone who’s been using the Xbox Wireless Headset with both my Xbox Console and my gaming PC, I can confirm that the current behavior isn’t really convenient. 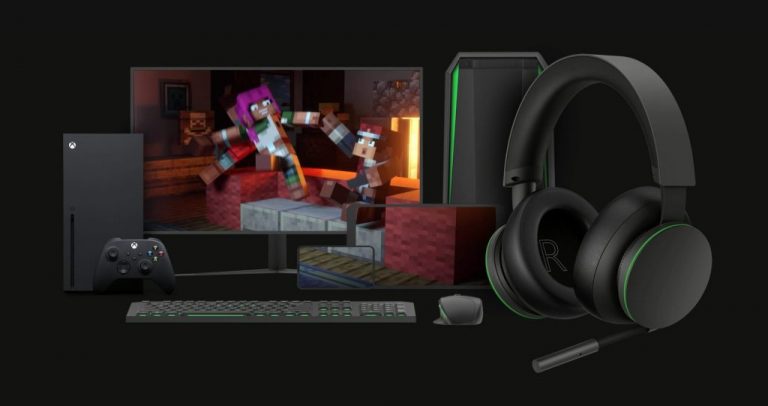 To my knowledge, the rotating dial on the left earcup that you use to adjust game/Xbox Live chat balance on Xbox consoles doesn’t work on Windows 10 PCs. That doesn’t really bother me as I prefer to use Discord over the Xbox app for voice chats on my PC, though it's probably still worth mentioning. Otherwise, audio settings in the Xbox Accessories app will sync across your Xbox and PC, and that’s very welcome.

Overall, my biggest complaint regarding multi-devices scenarios is that there’s no easy way to make the Xbox Wireless Headset seamlessly switch between an Xbox console and a PC with Microsoft’s Wireless Adapter: You’ll need to go through the same syncing process every time you switch devices, and I really wish the headset was able to remember at least two devices that were previously synced via Microsoft’s Xbox Wireless Protocol. That may not be a problem for you if you’re ok with connecting the headset to your PC via Bluetooth, though you won’t be getting the best possible audio quality.

For just $99, Microsoft’s Xbox Wireless Headset offers a lot of bang for your buck with an excellent design, built-in Xbox Wireless and Bluetooth connectivity, and a competent microphone. This is a solid upgrade over the company’s previous Xbox One Stereo Headset, and any gamer looking for an affordable wireless headset should really appreciate what Microsoft has to offer with its new accessory.

Again, it’s too bad that the default audio settings lack some clarity, but you can easily find a better balance using the Xbox Accessories app. The included six months trial for Dolby Atmos for Headphones is also a nice perk, though Microsoft certainly needs to do a better job at highlighting games that supports Dolby Atmos in the Microsoft Store.

Competing headsets starting at a higher price range probably offer better sound quality than Microsoft’s Xbox Wireless Headset, but this is still a very encouraging start for the software giant. In the future, I'm hoping to see Microsoft release an “Elite” variant of its new headset with new features and even better materials. In the meantime, though, the Xbox Wireless Headset is currently out of stock on the Microsoft Store, and you may have some trouble finding it at other retailers.