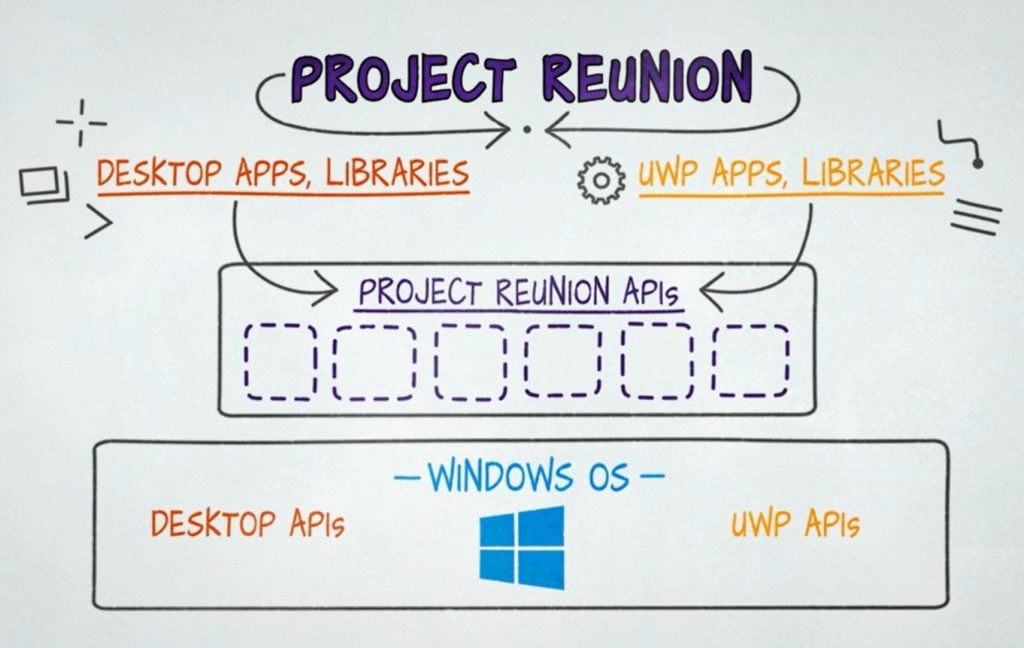 Project Reunion works in all your apps - Win32, Packaged, and UWP - and across many versions of Windows. It provides a unified platform for new and existing Win32 and UWP (Universal Windows Platform) apps.

Project Reunion will help developers update and modernize their existing apps with the latest functionality, whether they're C++, .NET or React Native. It will unify access to existing Win32 and UWP APIs and make them available decoupled from the OS, via tools like NuGet.

“The idea behind Project Reunion is that it allows developers to build one Windows application and target all 1 billion Windows devices,”

Microsoft has been working to bring Win32 desktop apps and its UWP apps closer together in recent years. Project Union is a step in the same direction, with both traditional desktop apps and UWP apps referred to simply as ‘Windows apps’.

At the Build 2020, Microsoft released a preview of WinUI 3 which is one of the first components in the Project Reunion journey. Using WinUI, developers will be able to create new apps with modern UI that adapts and scales across devices, or incrementally modernize the UI of existing desktop apps.

Microsoft also introduced WebView2 preview which allows developers to embed a Chromium-based WebView in their apps. WebView 2 will be completely decoupled from Windows, so developers can enable full web functionality without being locked into a particular version of Windows 10.

Microsoft is looking to engineer Project Reunion in the open on GitHub, so the developer community can have a more direct say in how the platform evolves.

Microsoft has broader ambition with these Project Union-powered Windows apps. While these modern apps will be able to run on ‘1 billion Windows devices’, they can also be optimized to be streamed from the cloud to thin clients.

As you go along, you’d be running Windows apps not only on Windows, but also iOS, Android, Mac, and Linux from the cloud. While you can already stream apps remotely to smartphones, Project Reunion enables modernizing older apps instead of having to rewrite them for the web or mobile platforms.

Problems of the past

Microsoft has struggled with making a sense of its legacy hangover and modern outlook with a unified approach.

UWP had a shaky start and once Microsoft gave up on its mobile ambitions, the platform struggled with developer interest. For a business app, why would a developer commit to UWP when he has to serve older Windows versions as well as has no intent to be available on an Xbox or a HoloLens?

And then there was the Microsoft Store conundrum for delivering packaged apps, where honestly, even Microsoft hasn’t helped build developer confidence. Both the new Microsoft Edge and Office 365 – two of the company’s flagship products – aren’t shipped via the Store.

Is Project Reunion the right evolution of the Windows developer platform or is it a case of too little too late? Time will tell.