Ten best Microsoft apps for your iPhone or iPad 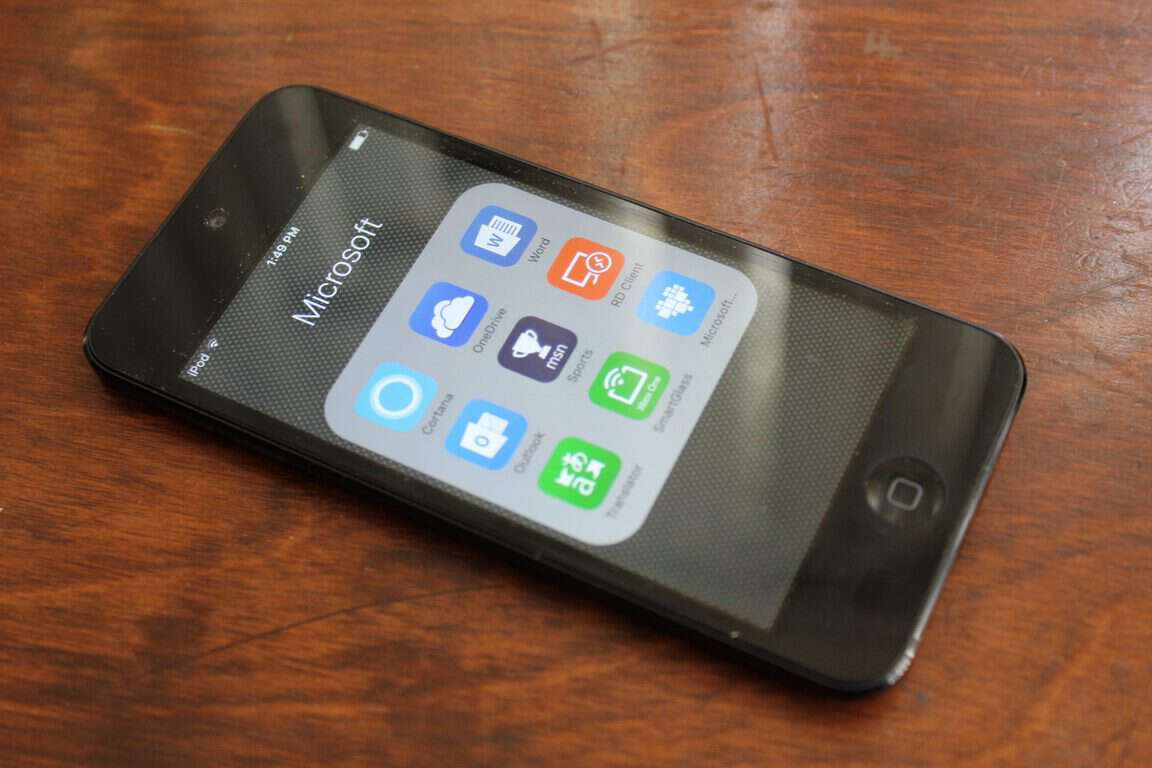 There was once a time when Microsoft software and apps would only work on Microsoft products, but that is no longer the case. Today, we live in a world where people own multiple devices that run on various platforms, be it Android, Windows Phone, or iOS. It makes sense then to see Microsoft placing its own apps in app stores outside of the Windows ecosystem.

Currently, in the iOS App Store alone, there are up to 70 apps created by Microsoft that are aimed at both consumers and businesses. What follows are my top 10 Microsoft apps for iPhone and iPad. 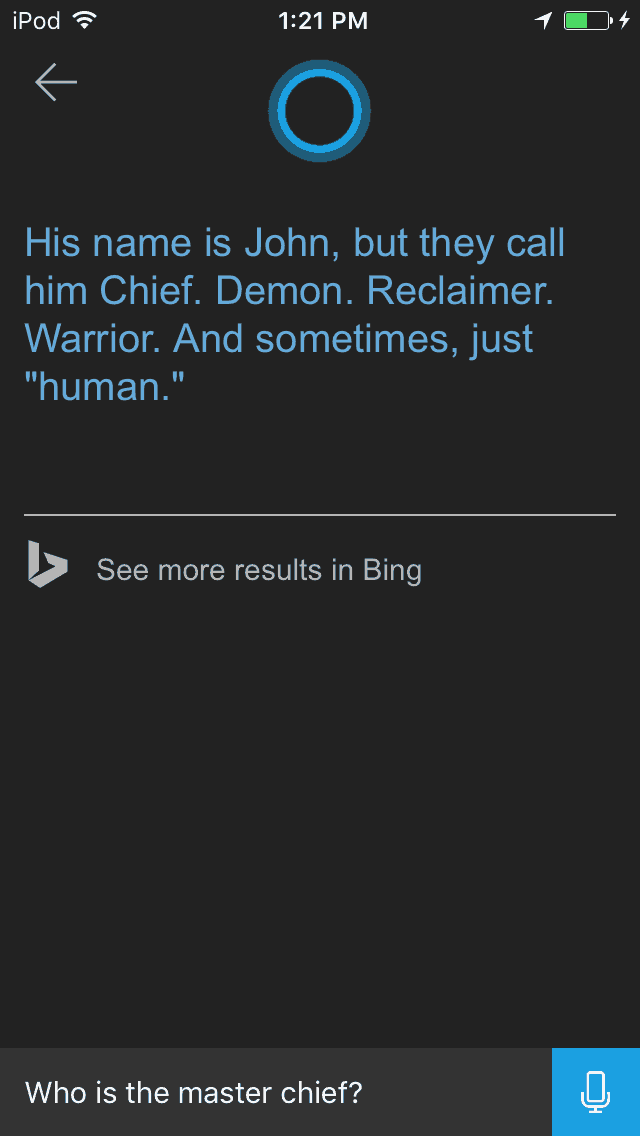 First on the list is our wonderful digital assistant named Cortana, which has been available on the Windows platform since the launch of Windows 10. More recently, Cortana made its venture into iOS, where it helps you get things done by letting your PC and iPhone work together. Your schedule, your interests, your people, your reminders are all things Cortana makes sure are available wherever you need it.

Much like Siri, for me, Cortana is fun to play around with outside of its intended productivity purposes. I frequently ask the digital assistant funny questions, and it often gives me funny responses in return. The Halo questions always make me chuckle.

One downside to iOS version of Siri, however, is the lack of functionality seen on Windows 10 devices.  On iOS, Cortana cannot search system resources or documents.  Also, on iOS there is no “Hey Cortana” functionality to awaken Cortana from her sleep.  Cortana can’t even be summoned from other Microsoft apps like Outlook.  Unlike Siri, Cortana on iOS does not currently support any other languages besides English and Chinese.  While all these features are lacking in the iOS version, it is by no means a reason not to try Cortana on your iOS device. 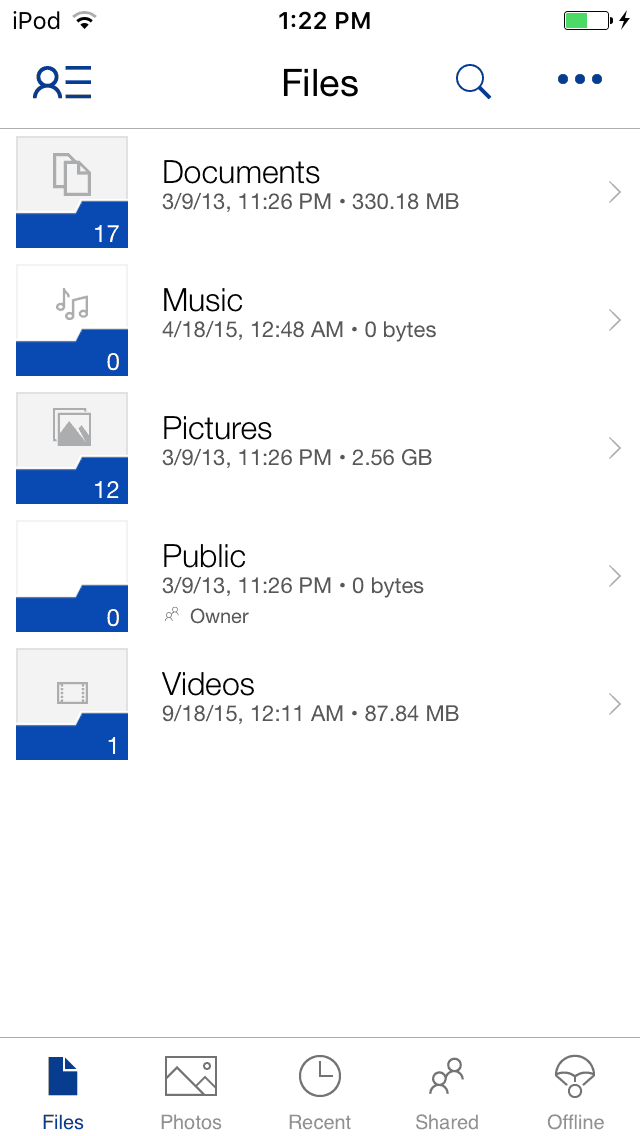 Accessing all my files across devices

Second on the list is OneDrive, which can serve as one place for everything in your work and personal life. OneDrive gives you free online storage for all your personal files so you can get to them from your iOS device, computer (PC or Mac), and any other devices you use.

I own multiple devices, including a Surface, Lumia, iPod, MacBook, and a Windows 10 PC. With OneDrive, I can share and transfer files between all of my devices. Perhaps the best instance of this is accessing my work at WinBeta, where my work is primarily done on Microsoft Word on my Surface but I also function on other devices as well. If I drag a work-in-progress article into the OneDrive folder on my Surface, I can then later pick up that work by downloading the article through OneDrive on my iPad while laying down in bed 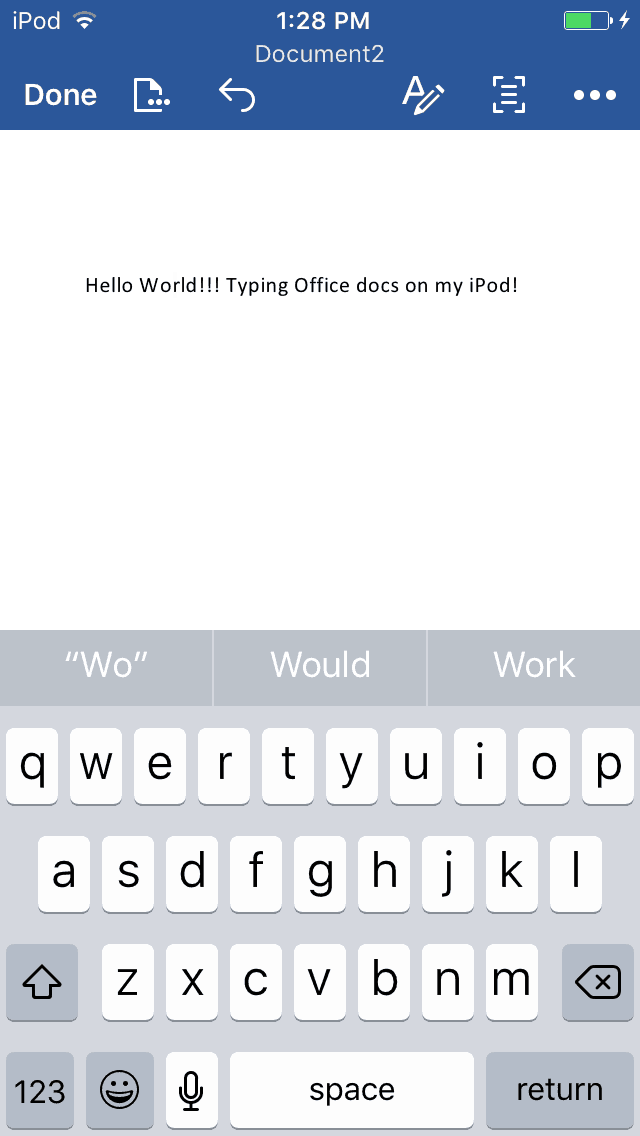 Typing and viewing Word docs with the Word app

With OneDrive explained, this brings me to Word. With an Office 365 subscription, a user of this app is able to create and edit word documents. Without Office 365, the user is able to read Word documents for free.

While I was a student in college, I frequently had to send documents, read syllabi, and other Word documents. Thanks to my college’s free Office 365 Subscription, I was able to download this app and edit documents right from my iPad while sitting in the campus cafeteria. Essentially, thanks to this app, I did not have to make the trip to the computer lab in order to make changes to the essay I stayed up all night writing.

The requirement of an Office 365 subscription to edit documents on the iOS version of Word, however, comes as a major downfall. On Windows phone devices, editing documents is free in the mobile version of the Word app (as long as you’re not using Continuum.) 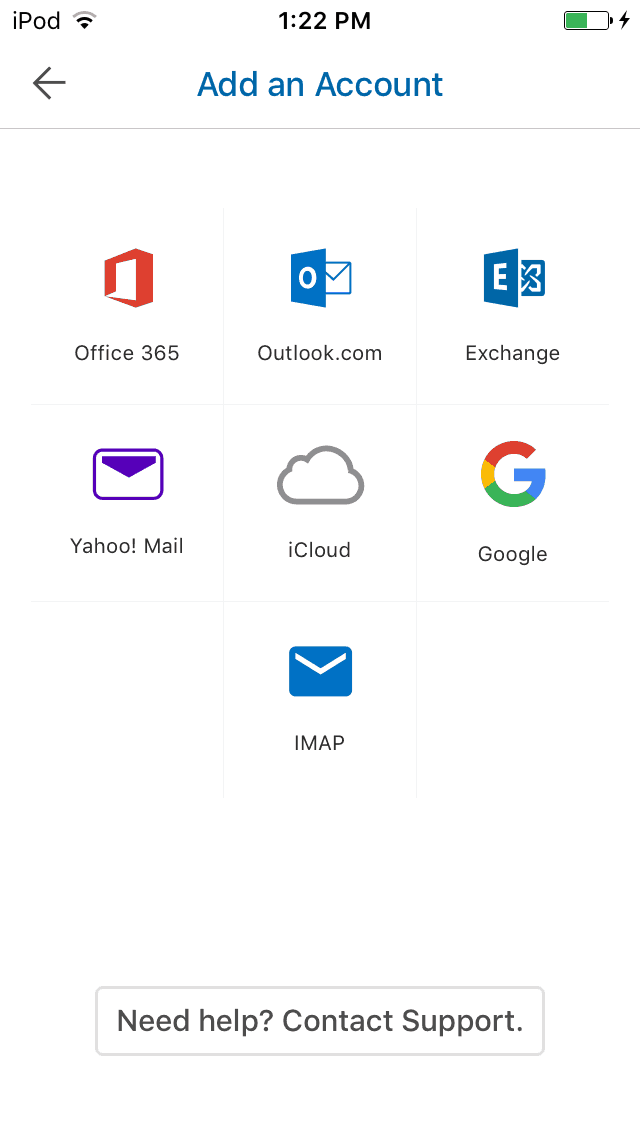 Accessing all types of email accounts through the Outlook app.

The office suite of products continues in the countdown with number four, Microsoft Outlook. Outlook for iOS is the app that helps millions of users connect all their email accounts, calendars, and files in one convenient spot.

Convenience is key for my use of Outlook. As with OneDrive, Outlook’s ability to let me access my information, in this case emails, across devices is one of the main reasons I love it. Unlike some other email apps, Outlook works very easily with IMAP, Yahoo, Google, Office 365, iCloud, and Exchange email accounts. I was able to set up my college email account and send and receive emails on my iPod with no problems. The Outlook app automatically recognized the college’s server information and threw me into a beautifully organized Focused Inbox right away. Thanks to the Focused Inbox, I never missed an important class cancelation email.

A look at the Remote Desktop App.

The “almost anywhere” is key to why I love the Remote Desktop App. I was able to enter in my desktop’s IP address into the app and remotely connect to it with ease. After pairing a Bluetooth keyboard and mouse, I gained the full desktop experience while sitting outside on an outdoor deck with my iPad. 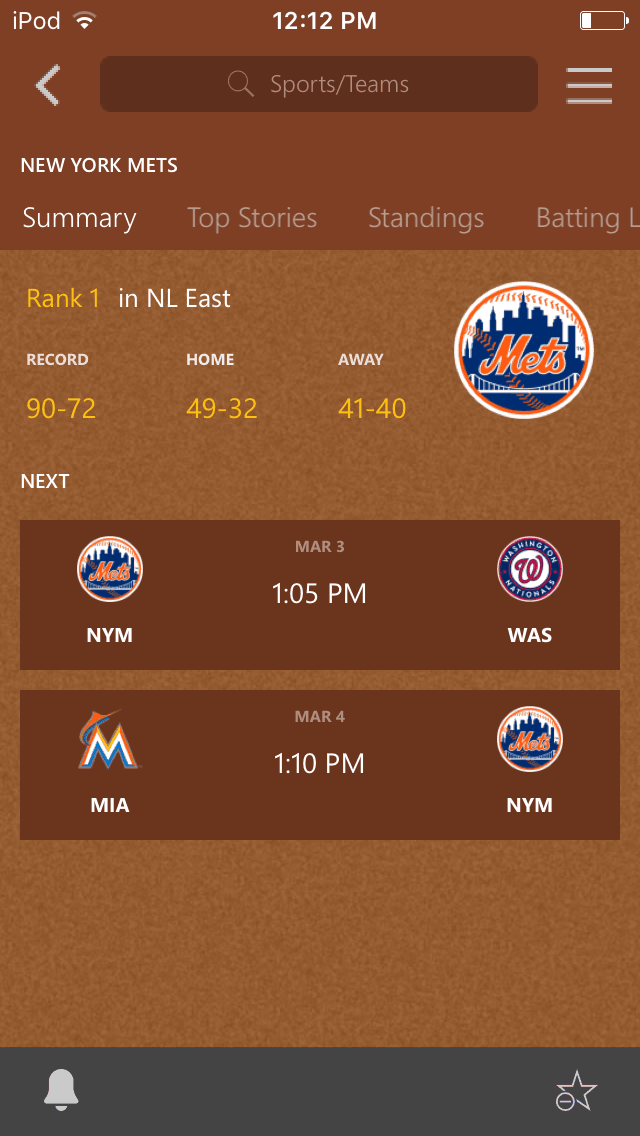 One of my favorite sports teams is the New York Mets. With the MSN Sports App, I am easily able to follow them, and other teams. The MSN app allows you to get real-time game updates, easy-to-follow schedules and standings, and the latest news across your favorite leagues and teams.

The app is very customizable, and you can add or remove certain favorite teams and sports. What makes this app fun for me is that the look of the user interface is unique to each sport. There is an outfield dirt look for baseball, a grass look for NFL, asphalt look for NASCAR, wooden look for NBA, and ice look for NFL. Unlike other Sports apps on iOS, the MSN Sports app gives attention to such small details. 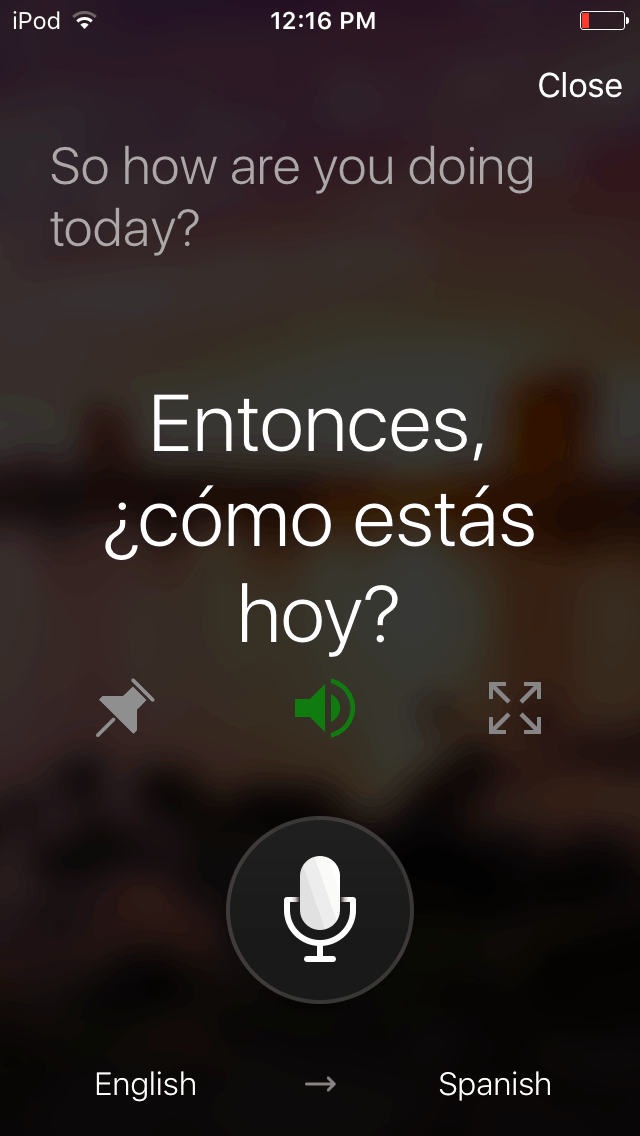 A look at the Microsoft Translate App

I  had many fun times with this app communicating with friends who speak Spanish. As shown above, the app recognized my speech in English and converts it to Spanish that my friends found was fairly accurate compared to most other translator apps. If this app existed three years ago while I was taking my Spanish course in college, I probably would have gotten an A instead of a B! 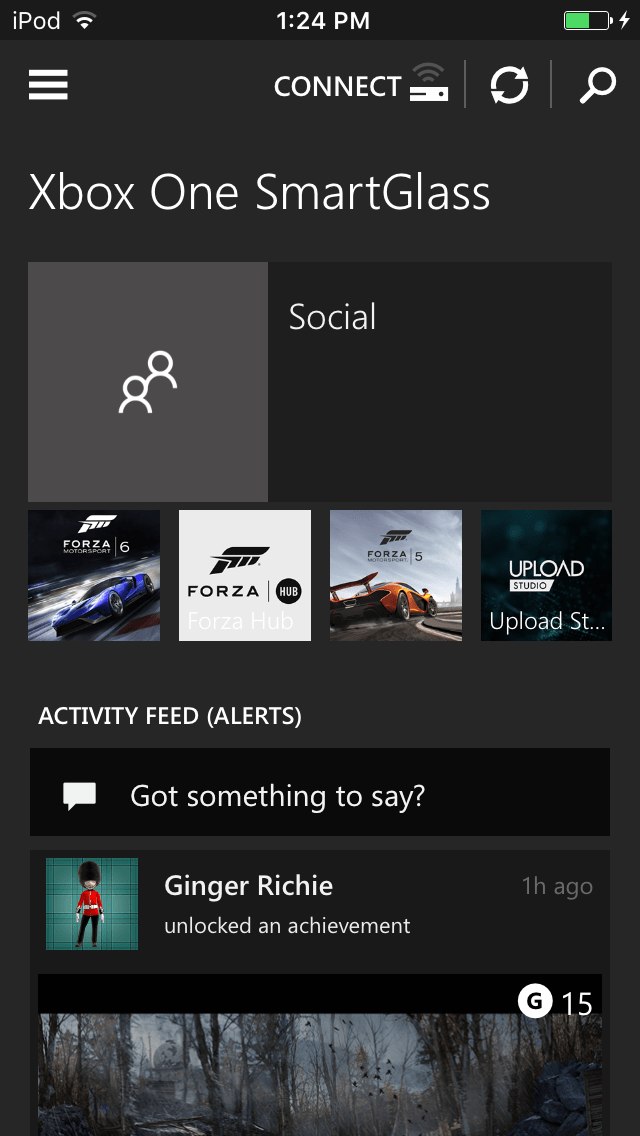 A look at the Xbox One SmartGlass App

For me, this app makes my Xbox One much easier to use. The onscreen keyboard on the Xbox can sometimes prove to be a great pain when responding to messages from friends. Smart Glass, however, is able to act an external keyboard when connected to an Xbox One on the same network. It is the only known iOS app that allows for this functionality. This makes responding to messages speedy and efficient. The app is also helpful for me to check on the status of friends who are available for late night Forza 6 sessions. 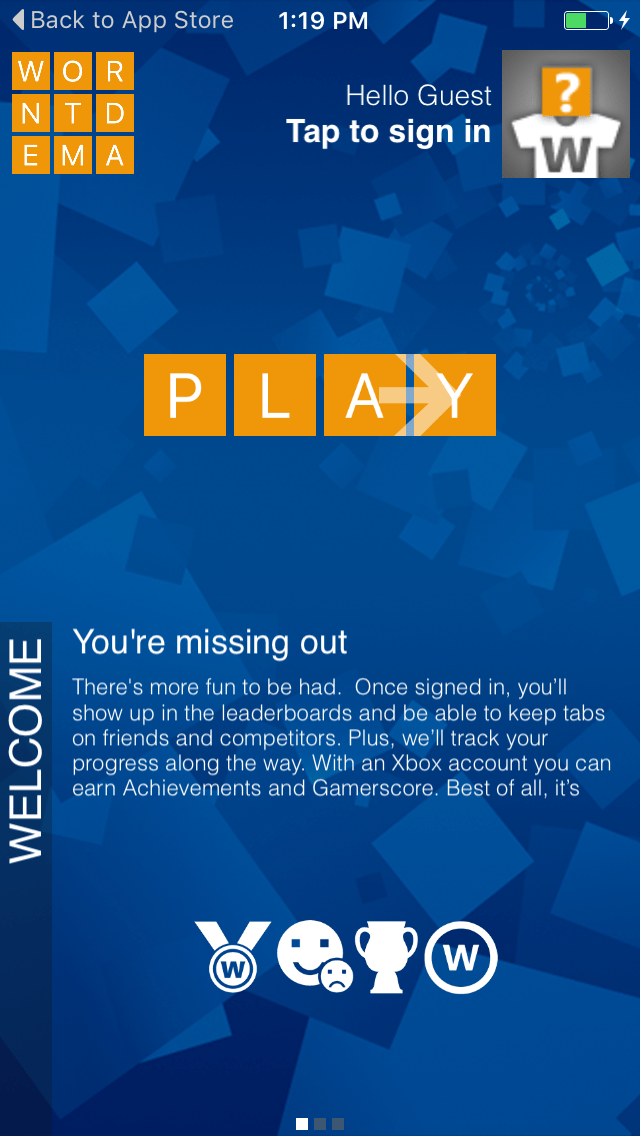 A look at the Wordament start page.

Most of the apps on the list so far have been productivity or office centered, but number nine is a game. Wordament is essentially a real-time continuous word tournament. Players compete on the same board with everyone at once. You can be a champion of this game in many ways: find the most words possible, earn the best score, find the longest words, best your Frenemies, or beat your top score.

I’ve spent hours in this game trying to fight my way to the top of the leaderboard. It has a very friendly interface, and the dragging of words creates a very pleasing sound. The ability to add and create frenemies also dragged me deeper into the app. I was determined to beat enemy scores! 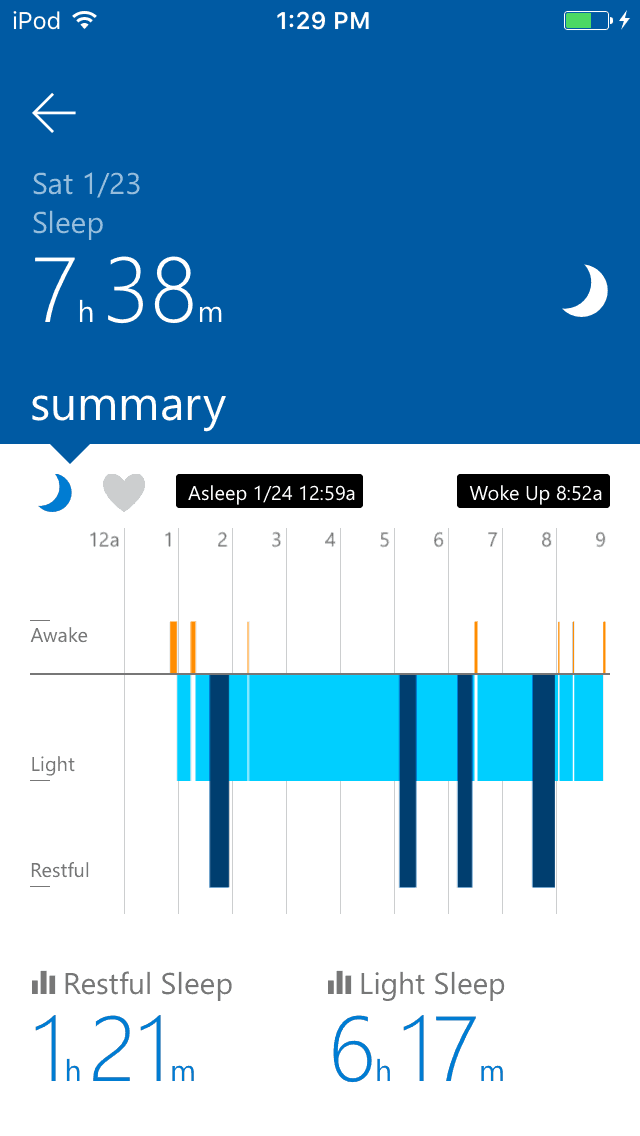 Microsoft Health App (And my lack of sleep)

The list ends with Microsoft Health. Being the owner of a Microsoft Band, the Microsoft Health app is essential for my Band experience. The Health app essentially allows you live healthier by analyzing data from the Band with full-color, easily understandable charts and graphs.

With the Microsoft Band app, I am able to check on the status of my health stats while I am away from the primary device I use with my Band, my Samsung Galaxy S5. When used on a second or even third device to view these stats, the Microsoft Health app functions just as it does on a primary device.

At the end of the day, for the most part, these 10 apps seen in the iOS app store are very similar in functionality to their Windows counterparts. Allowing users on non-Windows devices to access Microsoft apps is a great idea. I have more than one device from various platforms and it is very convenient to use the same apps I use on my Windows devices on my Apple device.