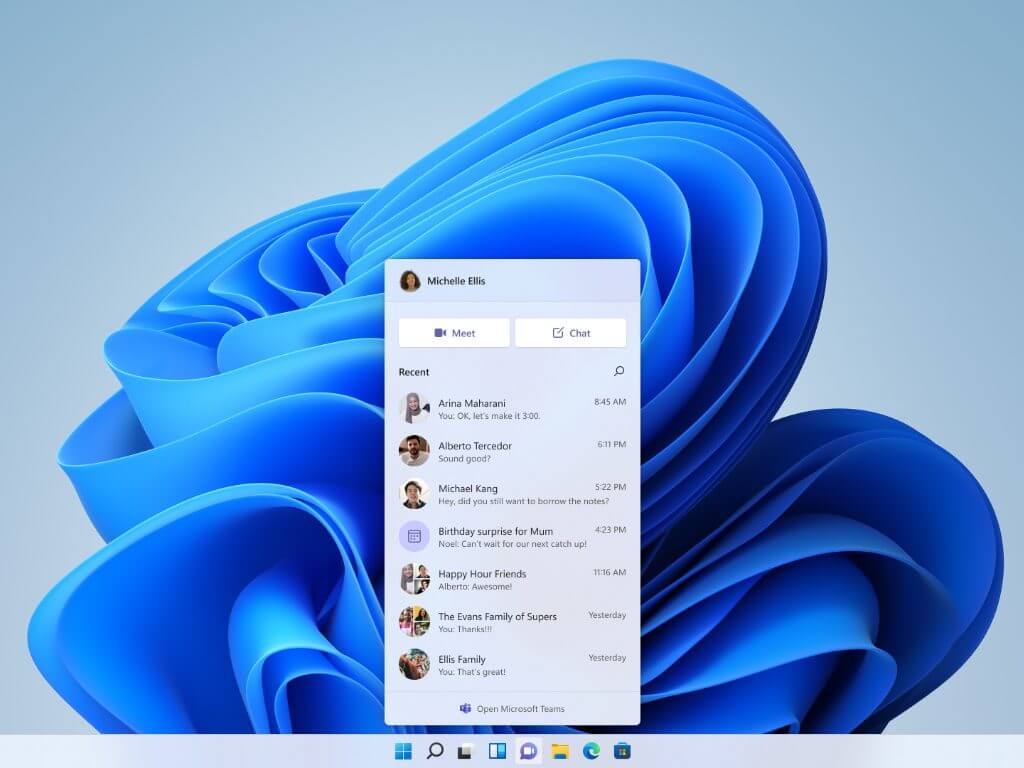 Microsoft has officially started rolling out Windows 11 yesterday on select PCs, and one of the big new consumer-facing features is a built-in chat app powered by Microsoft Teams. Even though Teams remains an enterprise brand first and foremost, Microsoft has recently introduced new features for consumers in the communication app, and the company may now see Windows 11 as a good opportunity to make Teams for consumers a built-in alternative to more popular messaging apps.

As you may know, this is a strategy the company tried before with Skype, with little success. The company actually announced last week that Skype was getting another redesign, confirming along the way that the app Microsoft acquired 10 years ago was here to stay. Skype didn't really benefit from the worldwide pandemic that made Microsoft Teams a true juggernaut in the business communications space, but it remains to be seen if Windows 11 can help Microsoft Teams to become more popular with consumers

Microsoft previously emphasized that Windows 11 was the first version of Windows designed for the hybrid work era, and this new built-in Teams app is a pretty good example of the increasingly blurred lines between our personal and work-related activities. The new Windows 11 Chat allows users to connect with their friends, family, and colleagues right from the taskbar, but it's also designed for sharing tasks and calendars with other people. When you first install Windows 11, you will see a new chat icon on the taskbar. Simply click the icon (or use the Windows + C keyboard shortcut) to launch the Chat app and sign in with a personal Microsoft account. People who have never used Teams will need to set up their profile and automatically sync Skype and Outlook contacts if they want to.

By default, the chat app opens in a small window, but you can click on the "Open Microsoft Teams" button at the bottom to open it in a big window you can resize the way you want. Your most recent individual and group messages appear at the top of the window. You will be able to immediately start a new chat or call by clicking the Meet or Chat buttons at the top and choosing who you want to contact.

Compared to the regular Microsoft Teams app, this new Chat experience certainly looks a lot less cluttered. While it may be difficult to get your contacts to use this new Chat app on Windows 11, there's also a new SMS Chat feature that lets you send a text message directly to a phone number, though it's is only supported in select markets.

A first look at Microsoft Teams 2.0

As you probably know, the regular Microsoft Teams app is based on Electron, and it's pretty heavy. Since launch, many users have been complaining about high memory usage and performance issues, but the new Chat app on Windows 11 is a different story.

Under the hood, this new Windows 11 Chat app has ditched the Electron framework in favor of Edge Webview 2, and it's pretty fast. It also offers a more modern design language which really helps to make the app feel native on Windows 11 design. You can expect support for light and dark themes, live emoji reactions, Together Mode, native OS notifications, quoted replies, and much more.

Microsoft previously said that the faster "Teams 2.0" architecture used by this new Windows 11 chat app will eventually make its way to the regular Microsoft Teams app for enterprise users. "The journey is starting with Windows 11 + consumer accounts, and will continue from there, explained Rich Tandon, CVP of Engineering for Microsoft Teams. In a series of tweets, the Microsoft employee explained that this new Teams architecture will also allow Microsoft to iterate faster and add support for new "work life scenarios."

Lastly, this architecture will help us add support for multiple accounts, work life scenarios, release predictability, and scale up for the client. It will be a journey but with #Windows11 we have taken key first steps.

Overall, this new Chat experience is an interesting look at the better "Teams 2.0" architecture that should make a big difference when it starts supporting enterprise accounts. For consumers, though, there's no guarantee that putting this new Chat app front and Center in the Windows 11 Taskbar is going to make Microsoft Teams the hottest messaging app for consumers.

As you know, Microsoft is competing with many other popular platforms in the messaging space such as WhatsApp and Facebook Messenger. To make things worse, Microsoft Teams is also competing with Skype, an app that still enjoys better brand recognition in the consumer world. To be frank, the "Teams" brand screams enterprise, and most people would probably not use an app named "Teams" to chat with close friends and family.

Since the release of Windows 10, we've seen Microsoft try and fail with new consumer-focused features that never got any significant traction, such as Paint 3D or Timeline. However, the Windows 11 Chat app could be a different story as Microsoft really seems serious about Teams for consumers. Recently, the company hired a former Facebook and Google product leader to work on its new "Teams for Life" initiative. Previously, the company hired former Google and Uber employee Manik Gupta as its new CVP for Teams Consumer Experiences.

Microsoft obviously has a strategy to make Microsoft Teams an app that can appeal to everyone, but we may well see history repeating itself with this new Chat app on Windows 11. The software giant pushed Skype pretty hard on Windows 8 and Windows 10, but most people had already moved to other messaging apps. Do you think the new Chat app on Windows 11 will get traction once the novelty effect wears off? Sound off in the comments below.

Battlefield 2042 Open Beta enters early access tomorrow, but you can preload it now