Hands-on with the Surface Laptop Studio: The craziest but coolest computer ever

I've reviewed tons of computers, but when I first heard about the Surface Laptop Studio during the Microsoft event, I really wanted to go check one out. I've never quite seen anything like it before.

On paper, the device is quite an interesting blend. It essentially mixes everything from the Surface lineup into one --- Laptop, Studio, Book, and Pro. I ventured to the Microsoft Experience Center in NYC (the old flagship Microsoft Store) to check it out after locking in my own pre-order just the same morning.

Safe to say, after trying one out, my impressions are still the same. The Surface Laptop Studio is one of the craziest and coolest computers I've ever gone hands-on with, and for more reasons than one. 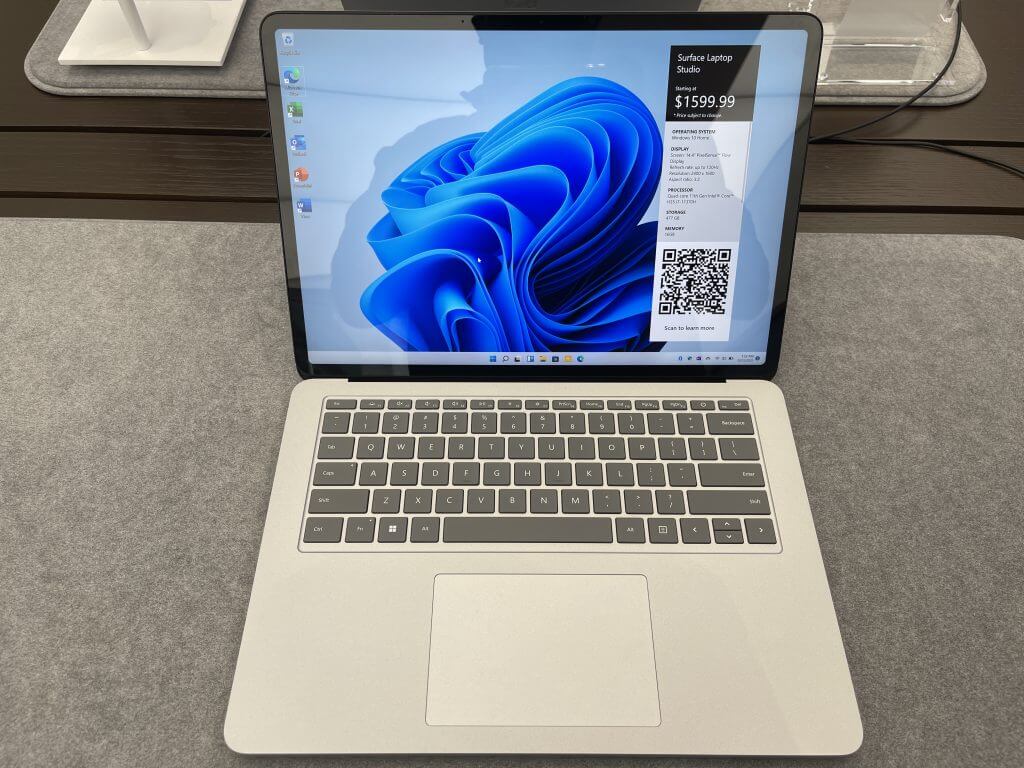 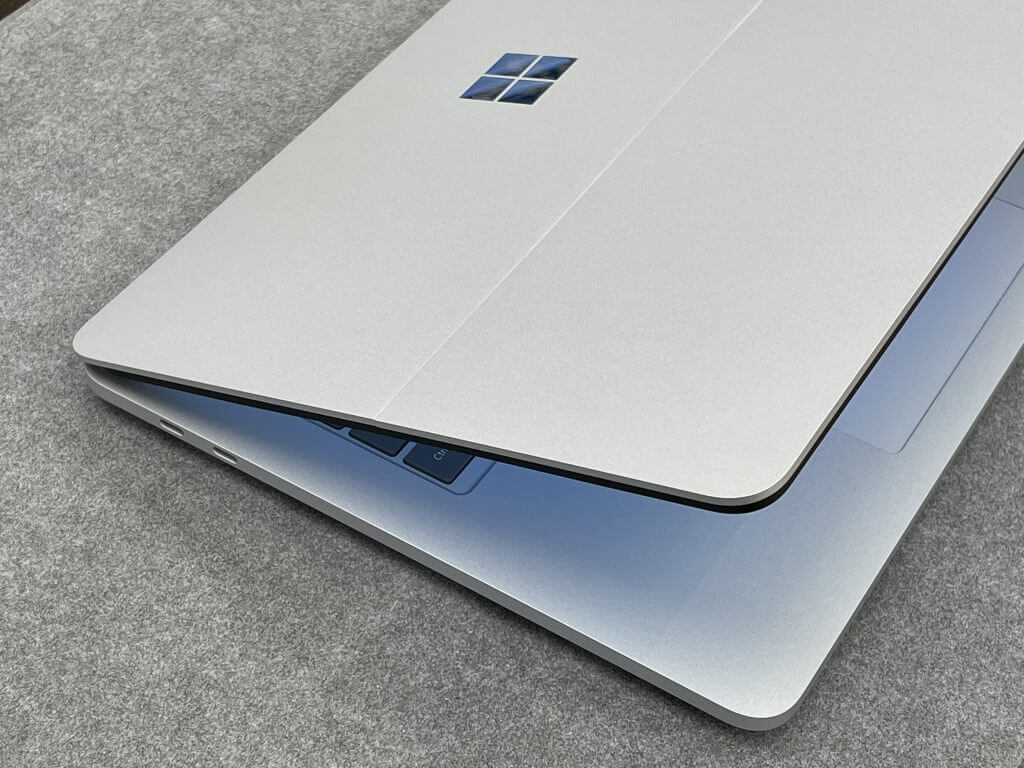 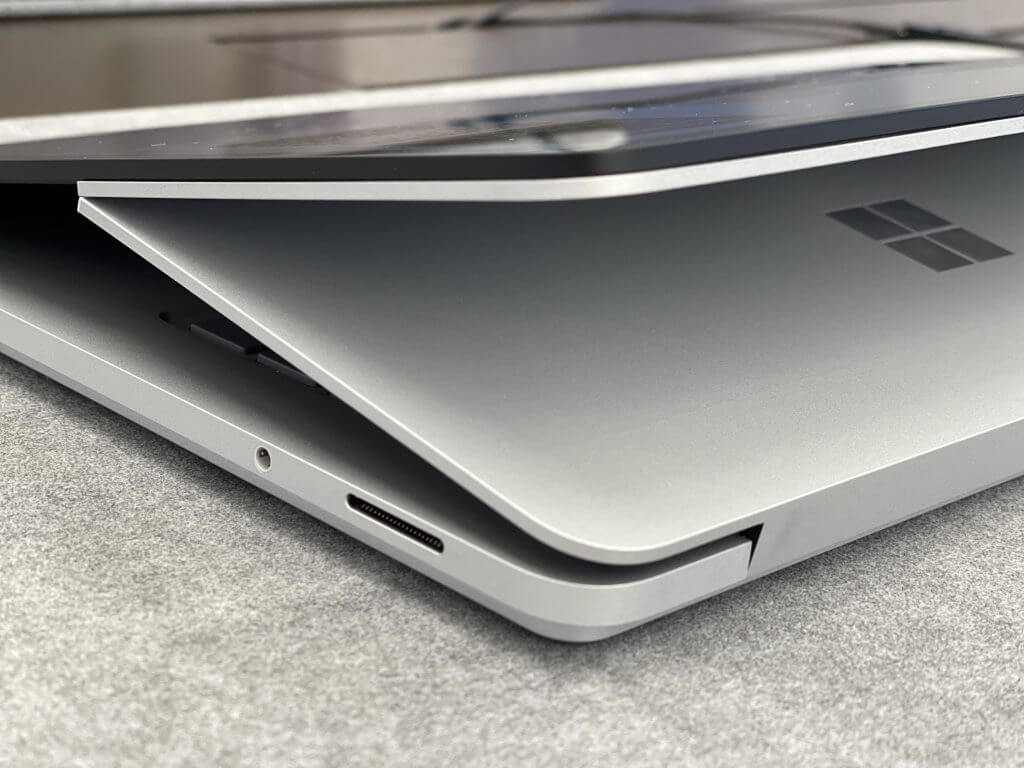 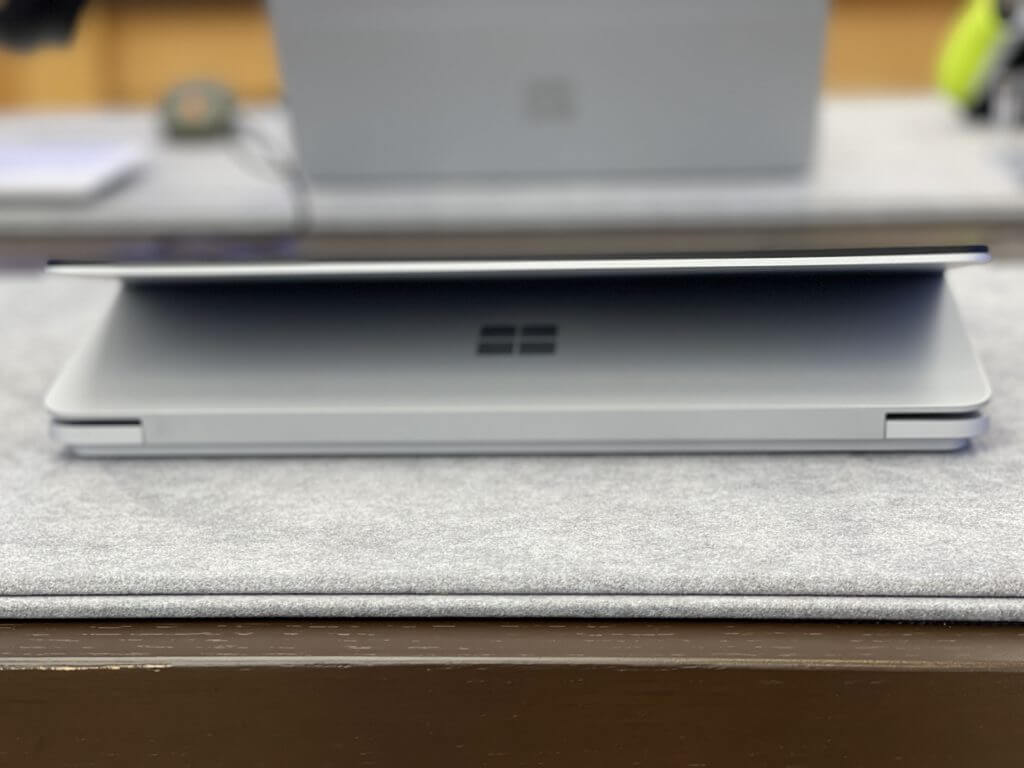 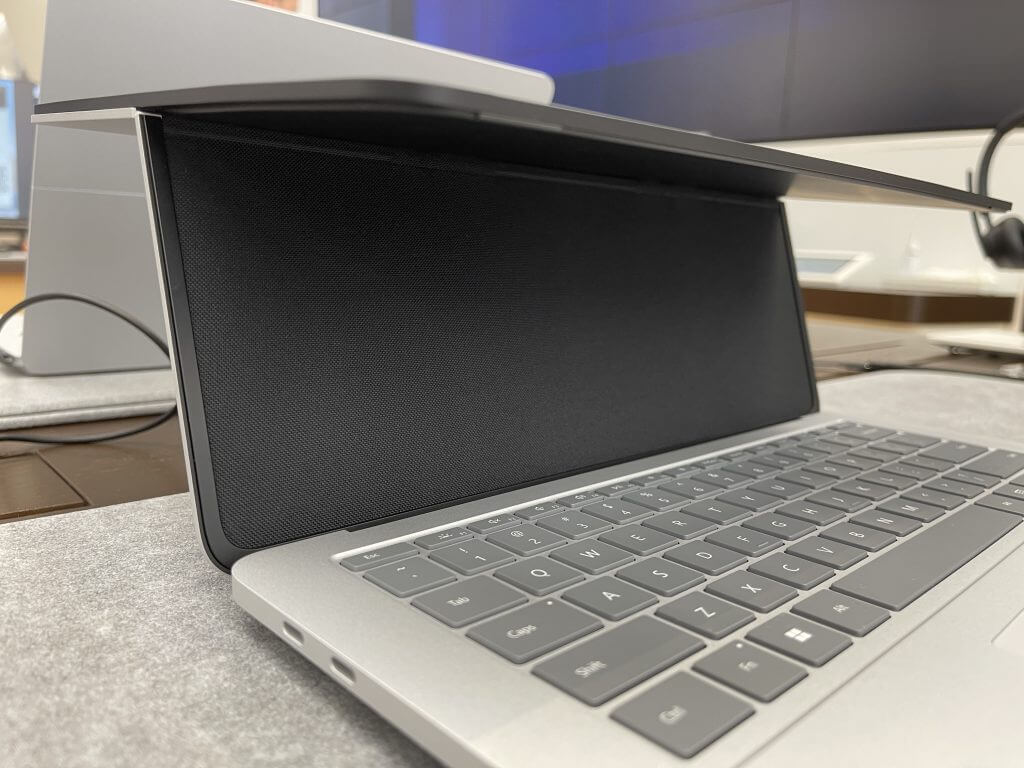 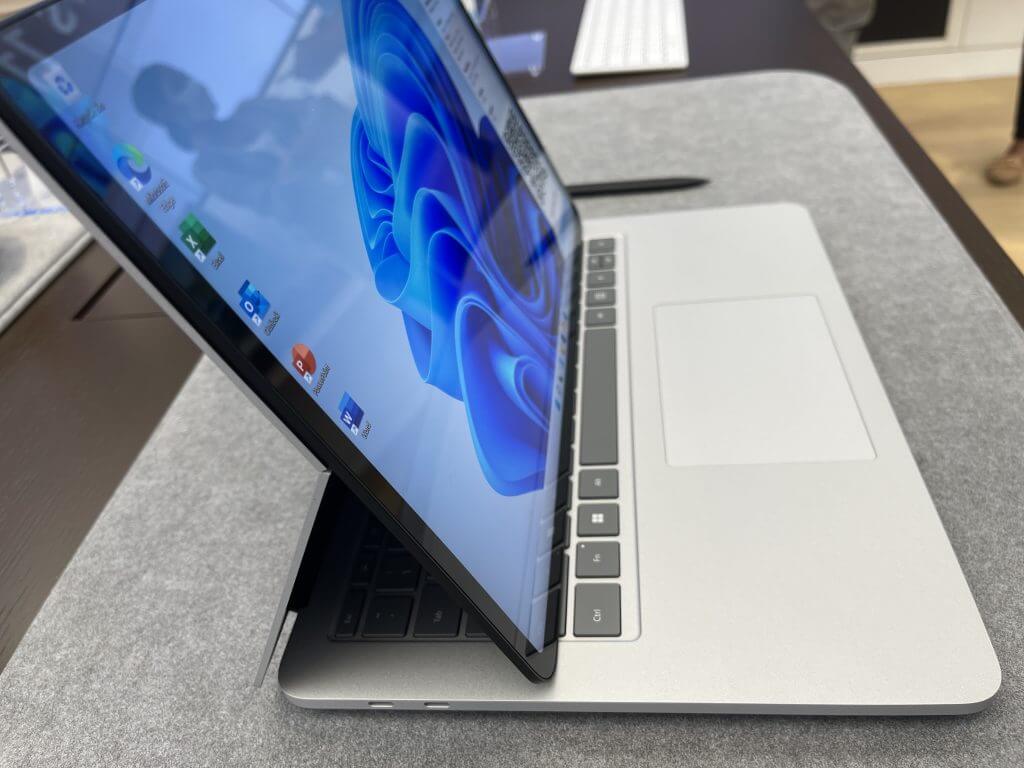 The design of the Surface Laptop Studio is what gets me the most. Microsoft basically took the MacBook, the Surface Pro, and the Surface Studio, and blended them all together as one. If you told me that Microsoft would be doing this last year, I'd call you crazy. But now, I just think it's cool.

From my hands-on time, I can say a couple of things. First, the Laptop Studio feels like a Surface device that we all love but with some tweaks. It's made of aluminum, has a fantastic hinge, but has new curvy edges like a Macbook.

Second, many people were quick to criticize the "hump" on the bottom of the device, but I never really noticed it once I set it on a table or in my lap during my hands-on time. It's under the device, hidden, and doesn't bother you if you don't think about it. Plus, it keeps the device cool, too, as the vents for the fans are there.

Third, the Laptop Studio has a unique display. Pull the display out towards you (not down or up like a regular laptop) and the display will move the screen out from behind a magnetic hinge so it "floats." The hinge that does this is made of fabric material, and the cables are hidden inside. I opened and closed the display a couple of times, and it was quite smooth. I also was shocked at how thin the display is. It's basically the thickness of a Surface Duo.

Yet that screen hinge is not as sturdy and strong as a Pro 8 kickstand, but it's smooth to move, and I don't quite think it will break easily. The cables that connect the display to the rest of the computer run towards the center and not the sides of the hinge. It's also quite strong when closed all the way in, and doesn't wobble. The magnets that Microsoft uses here are very sturdy and keep the display pulled in when using the device as a regular laptop.

But I won't spoil the show. I have a pre-order and want to save more of my impressions for a full review. Simply put, I've never quite seen something like this here in the US before (though Vaio did do this same design, it never went mainstream and doesn't have the "hump.") 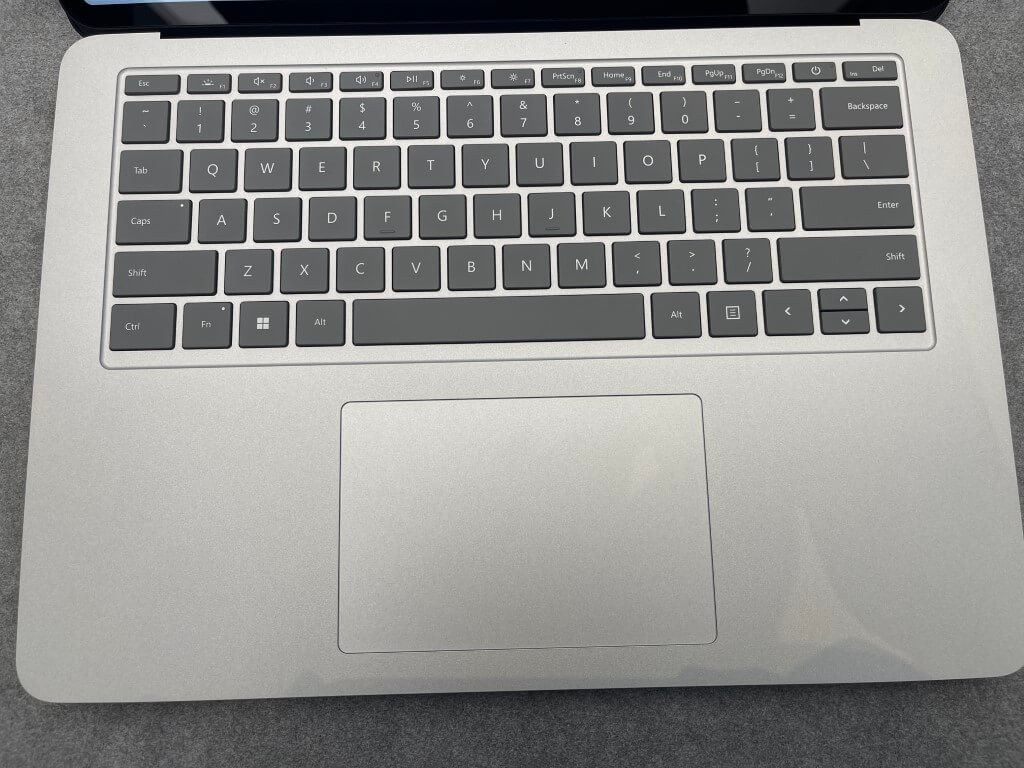 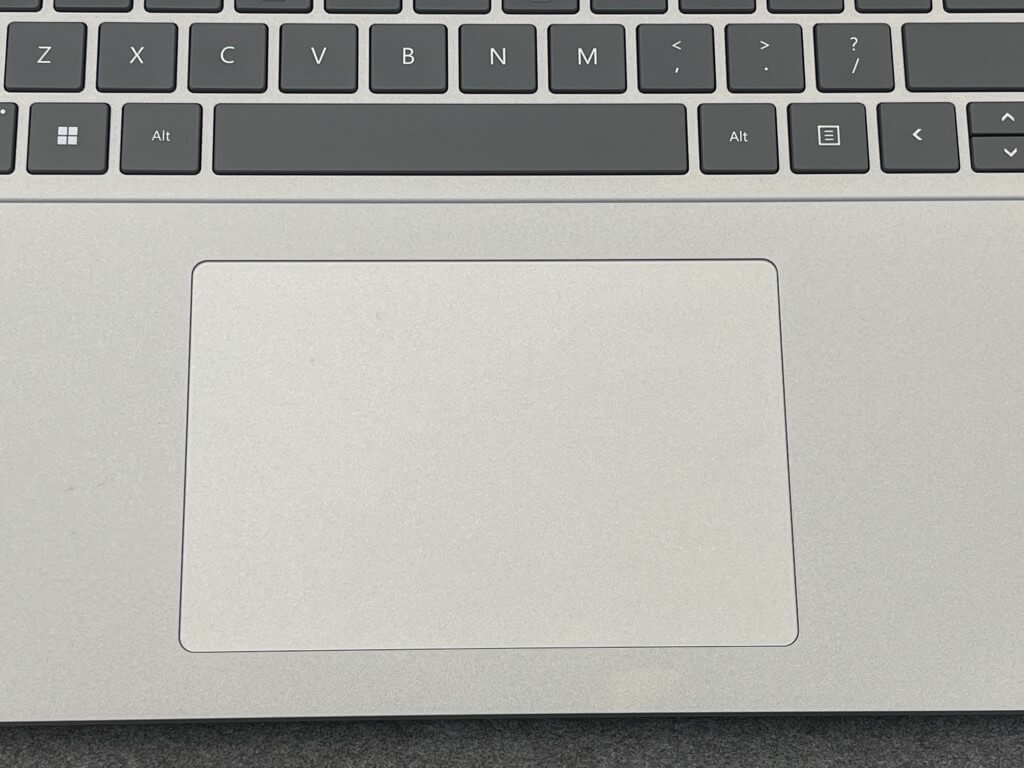 Another thing of note on the Surface Laptop Studio are both the keyboard and trackpad. The keyboard feels a lot like the one on the regular Surface Laptop with great key travel, and soft button presses. As for the trackpad, Microsoft is going with a haptic trackpad this year, instead of a physical one. This makes Laptop Studio feel a bit more like a MacBook. The trackpad itself is quite smooth, so your fingers can glide between gestures. After years of using Windows laptops with physical trackpads, this haptic one felt weird, but it was pretty responsive, and I got used to it after a few minutes. 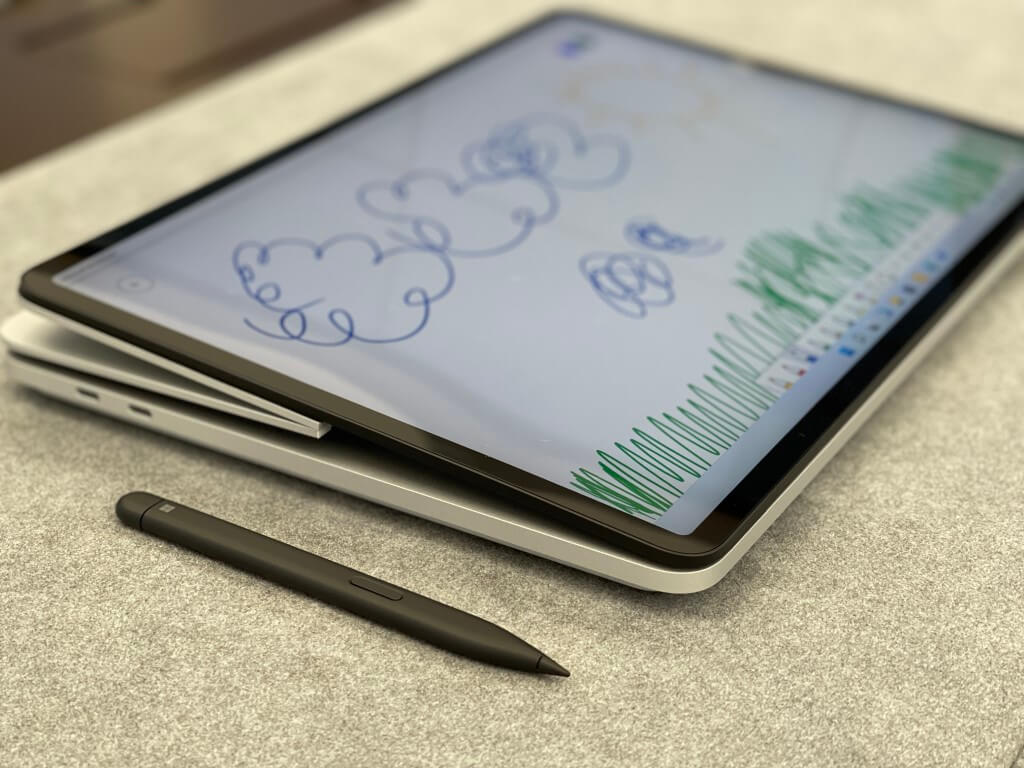 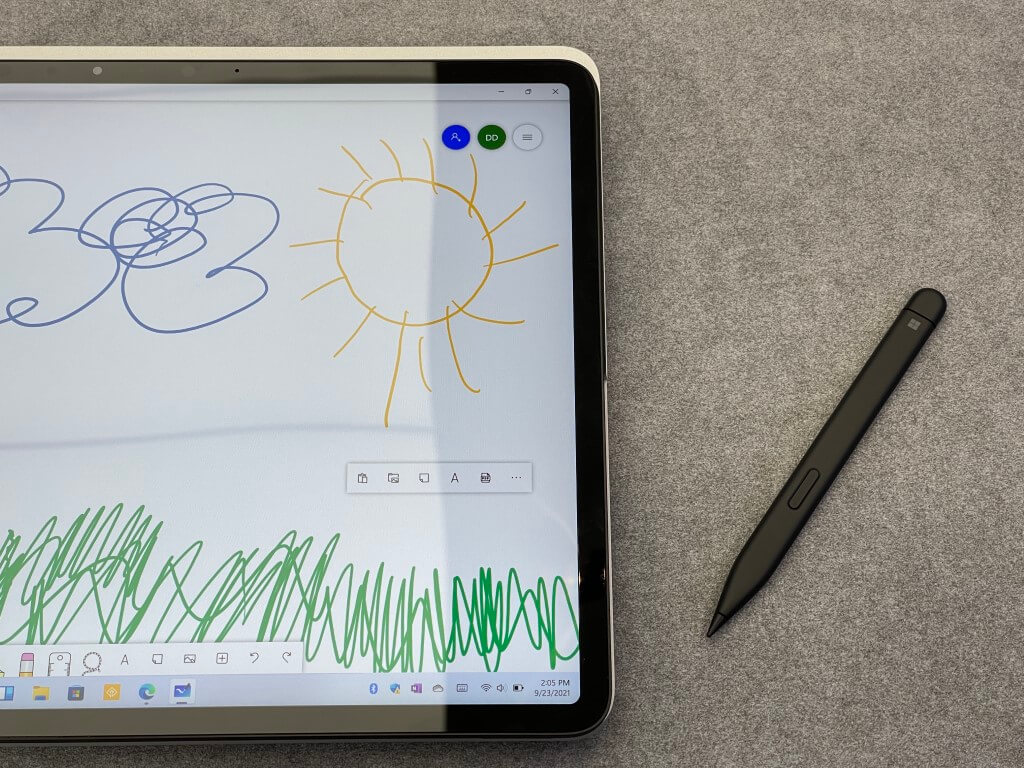 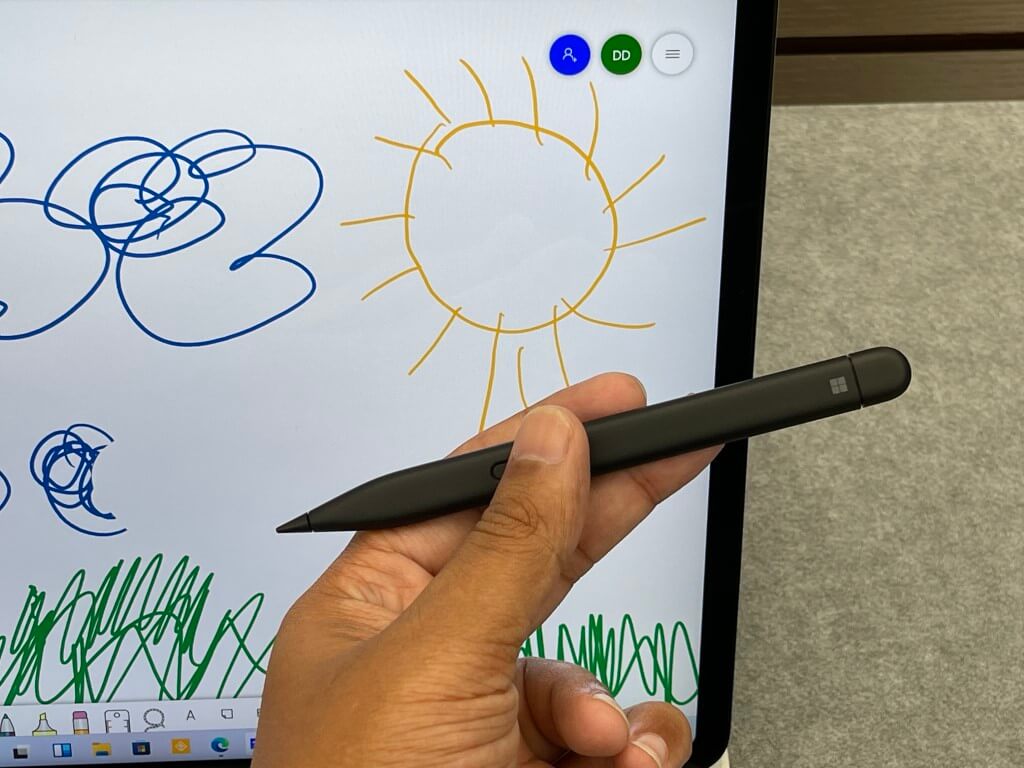 One of the signature features of the Surface Laptop Studio is support for the new Surface Slim Pen 2. This pen supports haptics, thanks to a special Microsoft processor built into the screen, and new haptic engines in the pen itself. Now, it was one of the features that I was excited about, but after trying it, I was a bit let down.

In drawing in Whiteboard, the haptic feedback wasn't as strong as I thought. It is indeed cool, and you notice it, but the feedback is more of a slight vibration. It feels just like the one you get on your wrists when you get a notification from a Fitbit or an Apple Watch. Still, pretty cool though, but not what I expected. I really thought the vibrations would be more intense, but I guess the Slim Pen 2 doesn't have enough room in it for bigger vibration motors.

Inking performance, though, felt really natural. The new Slim Pen 2 seems very responsive when compared to the original Surface Slim Pen. The 120Hz screen also makes everything feel more fluent. From highlighter strokes, pen strokes, and even just annotating something in Microsoft Edge, it felt like I had pen to paper. Again, I just spent about 45 minutes with the device, though, so that's subject to change once it becomes my daily driver.

Note that Slim Pen 2 houses on the bottom of the Laptop Studio. It's under the bottom lip. This makes sure the pen does not end up getting lost. It also recharges the pen too, and when you remove it, Windows 11 gives you a prompt to open your favorite inking apps. 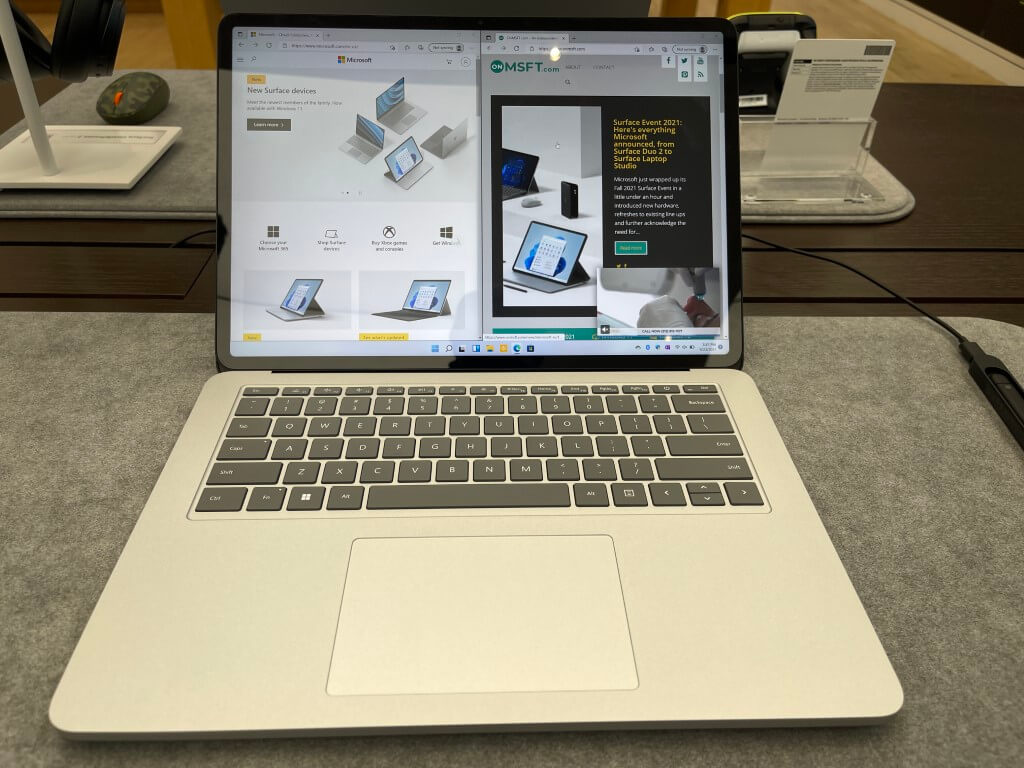 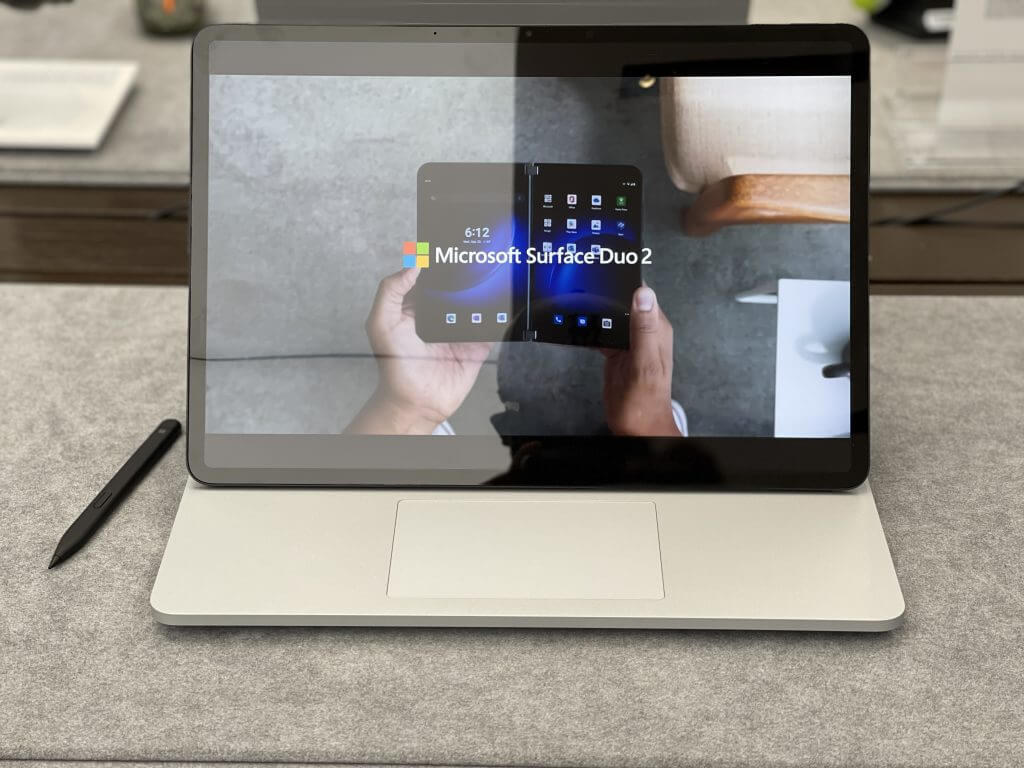 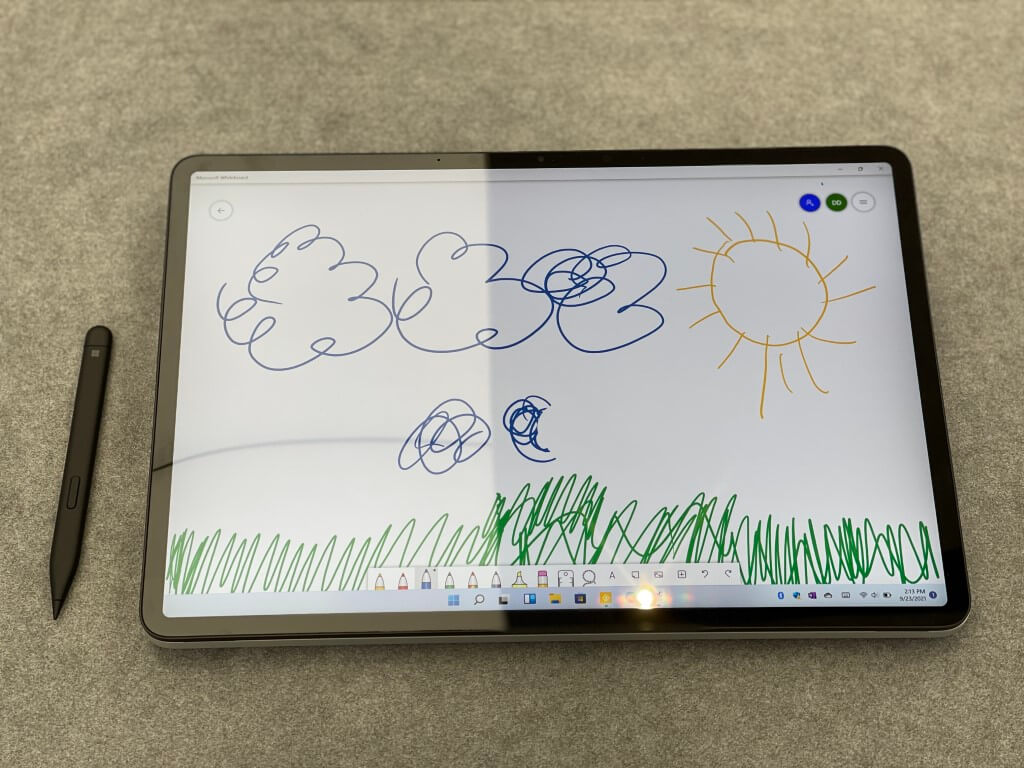 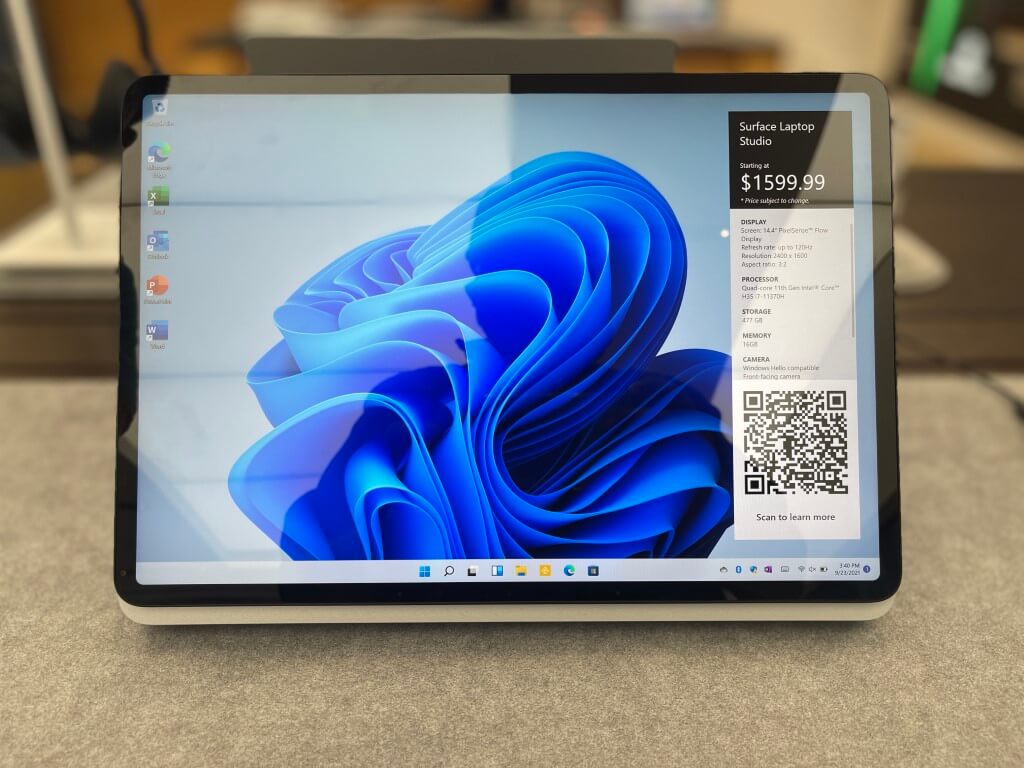 Surface Laptop Studio is special because it has three different modes of use. You can enjoy it as a regular laptop, in studio mode, or in stage mode. To me, this pushes the idea of a new level, as we're now getting new ways to use PCs.

In laptop mode, magnets hold the hinge closed so the screen doesn't wobble down. I think most people might end up using it like this. In a "Studio" mode, you can pull the screen down all the way and use it in the same way as an easel. Finally, in Stage mode, the screen rests halfway above the keyboard, letting you watch videos.

In transitioning between modes magnets will snap the display in place. As we said earlier, the screen's hinge only holds it down to three positions. It's not an infinite hinge like on the Pro series of devices. You can sometimes try to balance the screen in an unofficial position, but most times it will move freely back to one spot.

Of all these modes, I liked the laptop mode the most. Here the Laptop Studio feels more like a MacBook or a traditional Surface Laptop. The creative modes are fine and all, but I don't see myself using these modes often, as I don't always use my PC for inking.

I have a Laptop Studio pre-ordered and am looking forward to a full review. There's a lot more that I want to mention in this hands-on. That includes the new addition of Thunderbolt 4, as well as the new cameras, and how loud the speakers sound, but I'm sticking to the basics so as not to spoil my full review come the week of October 5. After trying one out, though, I am pretty excited to have one in my own hands