Quick hands on and first impressions of the Microsoft Surface Go 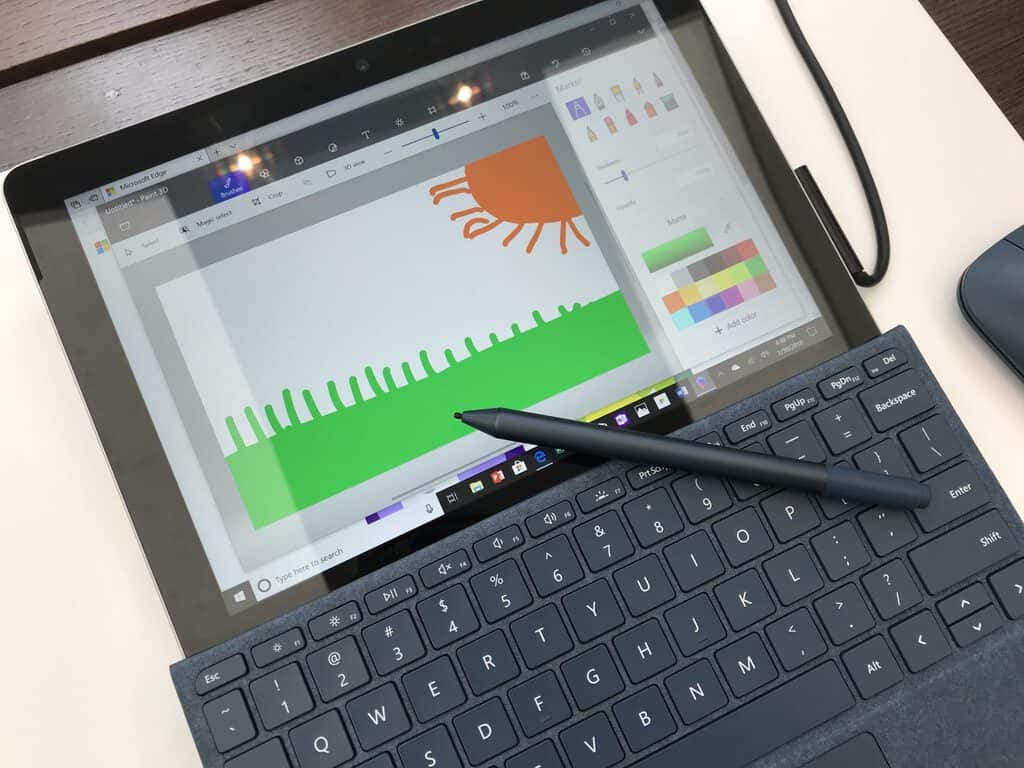 The Microsoft Surface Go won’t be out for another few days, but local Microsoft stores here in the US already have units on display. I had actually already pre-ordered the top range model just a few days ago, but I wandered down to the 5th Ave Microsoft Store in NYC yesterday to try one out for myself before the arrival date. In just spending 15 minutes with the 128GB SSD/8GB RAM Surface Go, I’m already somewhat happy about my pre-order, feeling satisfied with the overall design, performance, and inking. There are a few things which worried me though, and I am looking forward to diving deeper later in the next few weeks with my full on review with my own personal Surface Go.

Microsoft appropriately displayed the Surface Go right alongside the other members of the Surface family, and you can right away see that it’s different. Not only is the device smaller, but its corners are more rounded off, making the Surface Go look just so beautiful. It also makes the device feel much lighter and easier to hold in your hands, especially when in portrait mode. I won’t dive too deep into the rest of the design, as I’m saving that for my review, but for now, the look and feel have got to be the #1 highlight of Surface Go for me.

Peep the more rounded Surface Go on the left, and the Surface Pro 2017 on the right

One of the first things I did when I arrived at the Microsoft Store was detach Surface Go from the Type Cover and do some inking. At first, the Surface Go had a rough time accurately tracking the tip of the pen. Some of my movements were not being picked up, but a Microsoft Store rep told me that could just be due to the fact that this display unit was “popular” and was being messed with before. Anyway, after spending a good 4 minutes inking in Paint 3D, everything was smooth and accurate. I actually moved the pen from the Surface Go to the Surface Pro and didn’t feel any difference between the two. Inking on the Go and in a sample PDF file was just as good as the Pro, especially when in comfortable “clipboard” mode.

Inking in clipboard mode on the Surface Go (Sorry, vertical picture, I know)

When Microsoft first showed off Surface Go, the keyboard was a major concern for me. It initially seemed like the keys were jammed too close together, and it wouldn’t make for a good typing experience. These fears all came true when trying the display unit, as my fat fingers jammed more than one key at a time when attempting to speed type. I wasn’t able to get to my usual 100WPM typing speed, and on the Bing.com typing test, I only got to 51WPM. I only spent about 5 minutes typing and my speed increased over time, so I think that once my fingers get used to the small layout It’ll be okay. Sadly, the Surface Pro keyboards won’t work on the Surface Go, so this small keyboard and the comfort level is definitely something that I’ll keep an eye on and dive deeper for my final review.

Since Surface Go runs Windows 10 in S Mode, I was assuming that it would perform very well, and these beliefs were confirmed in my time at the Microsoft Store. Unfortunately, I wasn’t able to do any Geekbench testing as the display units were locked to S Mode. I instead put it through my usual web-based stress tests. I opened up YouTube, OnMSFT, and Microsoft website in Edge, and the Surface Go still stayed snappy and speedy. Pages opened fairly quickly and nothing ever froze up. The RAM went up to 3.5GB/7.9 GB, and the CPU usage was anywhere between 60-73%. I opened up Word in the background and also Excel, and again, nothing froze up and slow down. I honestly think the performance is great on this 128GB SSD/8GB RAM variant of the Surace Go, but I wish Microsoft had the base eMMC unit on display so I could compare. Time will have to tell as my full review Surfaces.

Performance on the Surface Go when using Edge

At the end of the day, I’m excited to spend some more time with Surface Go once my unit gets here on August 2nd. I’m traveling to Canada for a family wedding the same weekend as Surface Go releases, and I’ll be keeping my Surface Go right by my side. Be sure to keep it tuned right here to OnMSFT, as I’ll be doing an in-depth review.