One of the benefits of coming on board with Microsoft Teams is that the experience is always evolving. Based on user feedback, Microsoft is constantly tweaking and adding new features to the desktop and mobile Microsoft Teams apps. There have been a lot of announcements in this space over the past couple of weeks, so we've gathered up all the news for you, summarizing the new features which will help improve your meeting experience.

First on our list is Together Mode. With this feature, Microsoft is aiming to reduce your meeting fatigue. Instead of experiencing a meeting with a bunch of your coworkers appearing as tiles on a screen, this mode in Teams will put you all together in a shared virtual background. The first background will be an auditorium, but more will be on the way soon. Microsoft also says that his feature will help you see the body language of meeting attendees a bit more easily, to help make interaction easier. The feature is coming later in August.

In situations were Together Mode isn't right, there's the new Dynamic View experience. Using the power of Artificial Intelligence, Dynamic View will put you in more control over how you see content during your meeting. The feature is able to optimize shared content and video participants. Some of the new controls will let you show shared content and a specific meeting attendees side by side. It all builds on the previously announced ability to see up to 49 people in a meeting at once on your screen.

Next up is video filters. You might be familiar with the ability to set a custom background or blur your background in Microsoft Teams during a meeting, but video filters take that to a new level. Like the filters on Snapchat, Instagram, and other apps, you'll be able to use these to clean up or brighten up your background and appearance. Say, in a dark room, or in a room that doesn't have enough light.

More way to use apps during your meetings 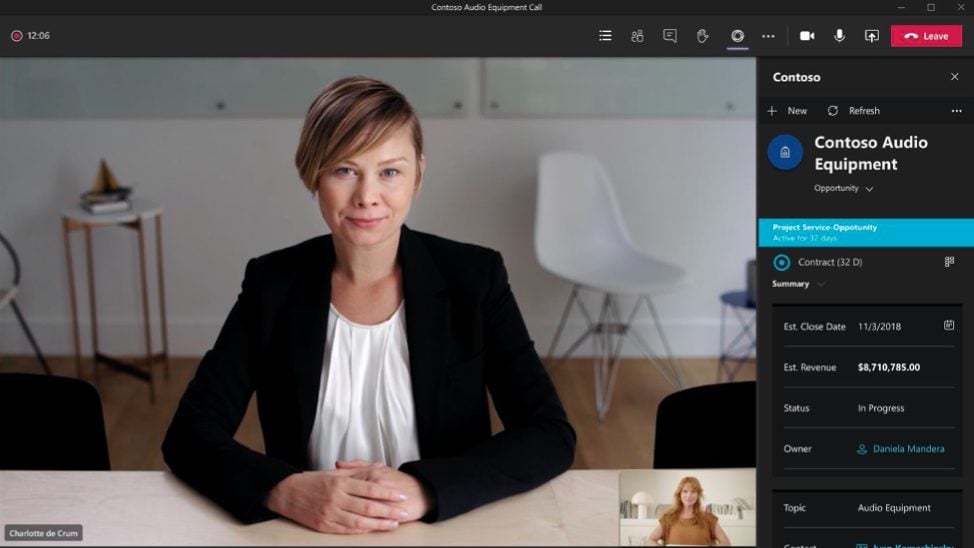 Apps in Teams used to be limited to channels, 1:1 chats, and group chats. At Inspire 2020, though, Microsoft announced that apps and third-party apps will soon be extended to your meeting as well. Thanks to a new API for developers, you'll soon be able to enjoy some of your apps in new areas.

Some of these areas include before the meeting in the meeting set up. There's also during the meeting, and from within the right-pane of the Teams desktop app. Developers will also be able to code apps so they'll be able to take advantage of in-meeting notifications too. Finally, after your meeting, some apps will be able to persist, meaning you won't have to worry about losing your content, and can jump into your app more easily after a call.

These are just some of the larger things that have been added or will be added to Teams. There are some smaller features on the way, too, which will still make a difference during your meeting.

For instance, Microsoft will be adding support for chat bubbles to Teams. This means that during meetings, chat messages will appear over a user's or meeting attendee's video feed to indicate their status such as late, away, etc. Falling in line with that is also support for emoji reactions. This will allow meeting attendees to give instant feedback on whatever happens during a meeting.

Features capping our list off include a reflect messaging extension, which will make it easier for managers to track their reams performance. There's also a new speaker attribution feature for live captions during Teams meetings, too.

Slack is suing Microsoft in the EU - says Teams is anticompetitive