LinkedIn, Tay, and Project Scorpio – a look back at 2016’s top Microsoft searches, according to Google

With the end of December just a few weeks away, 2016 is drawing to a close. For the folks at Google, who love nostalgia and publish a year in review video every year, now is the perfect time to look back on the year and discover what has captivated the interest of the world. 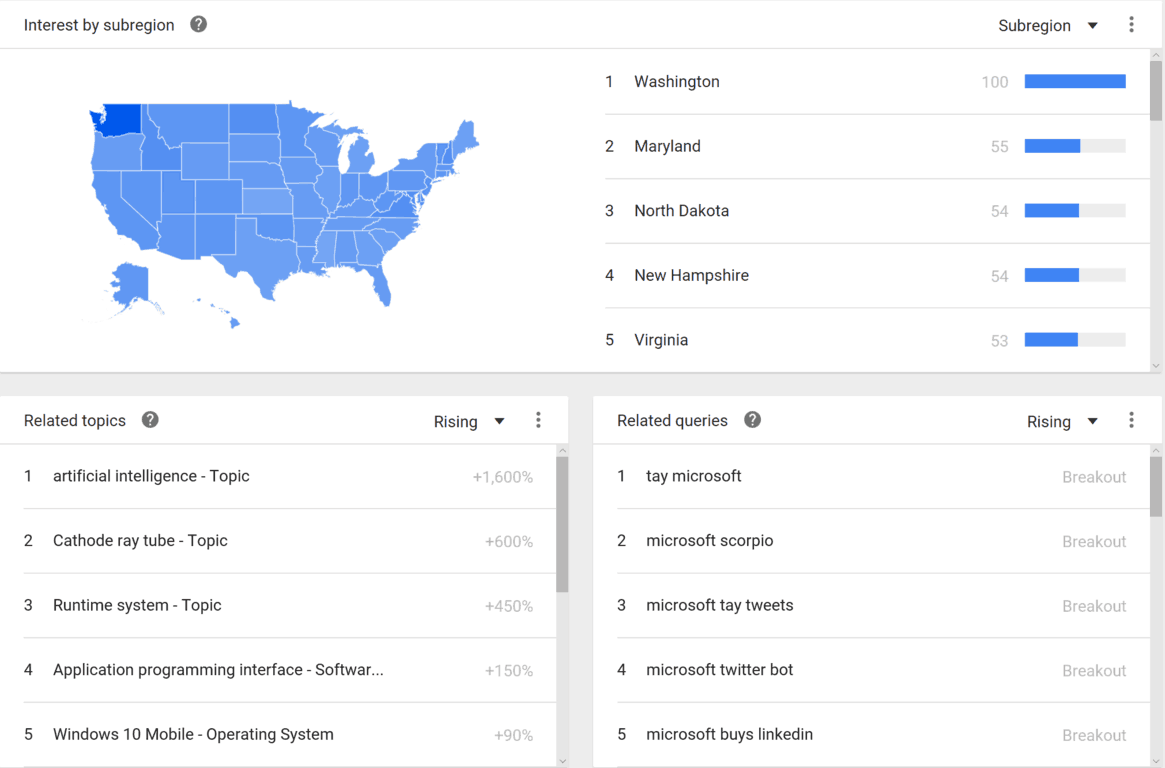 Top Microsoft Searches in the US

Maryland, North Dakota, New Hampshire, and Virgina, meanwhile, top out the areas that were most interested in searches for Microsoft.  Nonetheless, as you may recall, these Microsoft stories all emerged towards the middle of the year. So, please do read below as we remind you of how these stories emerged, and where they are today at the end of the year.

To begin we must remind you of Tay. Tay was a joint chatbot project by Microsoft Research and Bing, and was aimed towards 18-24-year-olds, to engage entertain people through casual and playful conversation. The project proved to be a massive failure, as users abused the chatbot and caused it to spew out racist, homophobic, and nonsensical remarks.  Microsoft was not happy with the results of Tay, and apologized for the unintended offensive behavior by the Tay bot and disbanded it.

The company, though, recently rebounded from the disaster, and quietly pushed out Zo, its latest AI project, and chatbot, on Kik Messenger.

Tay was a disaster

Next up (and ranking second on Google’s Microsoft breakout searches) is Project Scorpio, which is the next generation Xbox console. As you may recall, Project Scorpio took the world by storm at the E3 conference in 2016, as Microsoft called it, “most powerful console ever.”

The console will pack eight CPU cores and six teraflops of power and will have support for True 4K gaming.  Set to ship out in Holiday of 2017, it even will support high frame rate VR. In fact, all Xbox accessories will be backward compatible with the system and all Xbox One games will play on Scorpio, as well the Xbox One S. While the company has remained quiet on Project Scorpio since E3, Phil Spencer has come out and said that the company is making progress on the console, that it will have a console and not PC price, and that it “may be years” before a new Xbox is launched after Scorpio.

Project Scorpio took the world by storm in 2016

Trending #5 on Google’s breakout searches in the United States is Microsoft’s purchase of the business and employment-oriented social networking service LinkedIn. As we originally reported, Microsoft acquired LinkedIn for $26.2 billion in an all-cash deal, but quickly faced regulation troubles and scrutiny from rivals such as Salesforce. In fact, the acquisition of LinkedIn only officially closed one week ago, after the European Union expressed antitrust concerns, and after the service was banned in Russia over data storage issues.

When it comes down to OnMSFT, we would like you to know that we appreciate every single one of our readers. According to our WordPress backend, top searches on our website this year include, WinBeta, Windows 10 Mobile, Microsoft, Product News, Pokemon Go Windows Phone, Windows 10, Windows Phone, and Snapchat for Windows Phone. Again, all of us here at OnMSFT would like to thank you for taking your time off from your busy schedules to read our website and we all wish you a happy, safe, and healthy holiday season and new year!