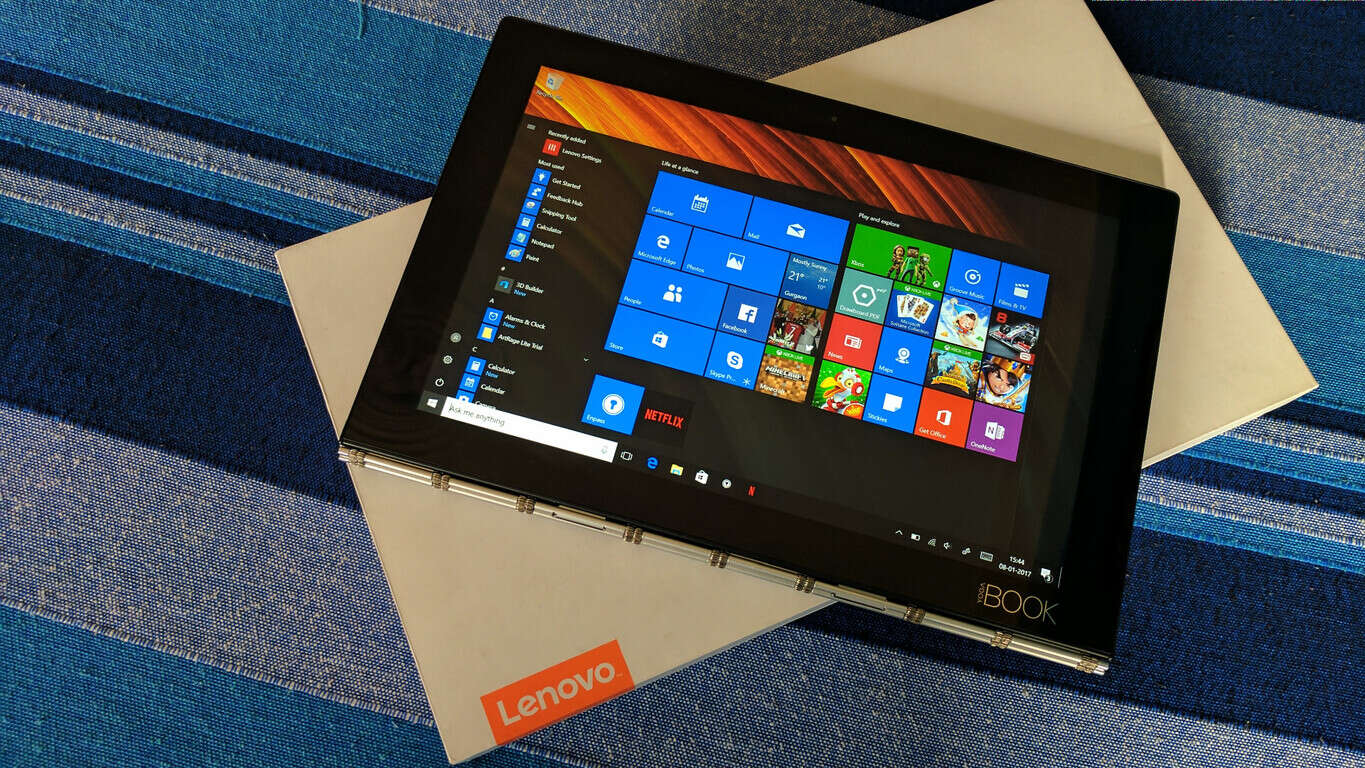 With the new Yoga Book, Lenovo aims to redefine the tablet. A similar attempt was made by Microsoft with Surface, however, it aimed to redefine the laptop. The mini Windows 10 convertible is a tablet at heart, and it is important to keep that in mind.

Instead of getting contended with touch, the Lenovo Yoga Book recognizes both handwriting and typing as an essential paradigm for a productive experience. Yet the compact form factor and plain vanilla internals suggest that the company doesn’t want to pit it against the most powerful, well-rounded 2-in-1 devices.

The 10.1-inch tablet-sized device opens up like any other laptop – sexier than most others, of course. The super thin magnesium chassis is just 9.6mm thin when closed! The Yoga Book is a visual delight and would turn a lot of heads when you put it on the table in a meeting room or open it up at a coffeehouse.

And then there’s the elegant Lenovo patented watchband hinge that allows for 360 degrees rotation of the display transforming it from a tablet to a laptop, and everything in between. The hinge is an engineering marvel and does it job well. It’s sturdy, yet rotates very smoothly, and there’s no wobble whatsoever.

Weighing just 690 grams, the Yoga Book is not just compact but also portable and can be carried around easily in any sleeve or bag.

I’m glad that Lenovo hasn’t tried to squeeze a 2K display which would’ve been overkill for the screen-size and pushed the modest processor more leading to a faster battery drain.

Once you open up the Yoga Book, you meet the futuristic keyboard – Halo Keyboard – that is unlike anything we’ve seen before (sci-fi movies don’t count!). Unlike a physical keyboard, the Halo Keyboard is built into a digitizing pad – called Create Pad - powered by Wacom that can also switch to inking with a dedicated Wacom pen. Essentially, that flat surface is a fully-fledged keyboard with trackpad as well as a dedicated inking workspace.

The Halo Keyboard lights up when the device is powered on, and looks absolutely amazing. Of course, you can adjust the brightness of the Halo Keyboard. There is haptic as well as audio feedback when you type, that is distracting as well too loud. There’s a way to turn off the feedback (which is what I did) but no way to adjust how strong it is, which is a bit of an oversight.

While the trackpad is wide enough, it’s a tad short. If you’re coming from a standard size laptop, you’d find it awkward to use for a few days or keep hitting space bar all the time, but if you’ve used smaller devices like the Surface 3, this would be a familiar territory.

While the typing on it isn’t too hard, you’d have to get used to touch-typing. It takes a little time getting used to and you’d end up cranking it nicely but don’t expect it to be on par with physical alternatives. We’ve already seen that with Microsoft’s Touch Covers for early Surface devices.

You can press the ‘Pen’ button on top of the keyboard to turn it off and enable the Create Pad that works for all apps that support inking including Windows Ink Workspace, Microsoft Office, Adobe Photoshop, and more. The pen works flawlessly, and the Create Pad does a great job of ignoring anything that's not the pen like the wrist or fingers.

Lenovo also bundles in a notepad in the box. You can hook up the magnetic clipboard to the Create Pad and switch out the digital ink-head for a real ink-head and write on the paper which Windows 10 will recognize as inking. It is great for people who prefer writing on real paper but would still like to record/archive the notes digitally.

The Lenovo Yoga Book is powered by an Intel Atom x5-Z8550 processor clocked at 2.4GHz with 4GB of RAM. It’s good enough for general productivity tasks and web browsing. One would imagine it to be a no-go for high-level workloads as one would expect from a Core M device, but the Yoga Book actually manages to squeeze in pretty good performance from its modest internals.

Using only a few apps at a time and keeping only few tabs open in Edge, the Yoga Book sails through easily. I could also run Photoshop seamlessly and played Asphalt Xtreme smoothly; all I did was to not do anything else in parallel. It is a treat to use Photoshop with the Create Pad, actually.

Thankfully, there’s no bloatware and big props to Lenovo for the same, especially important for a device with limited storage – 64GB in this case. The Yoga Book includes Windows 10 Anniversary Update, and except for bundled Windows Store apps, it only has a small utility app for OneNote to work with Create Pad.

Lenovo isn’t wrong in betting on the Atom 5x processor instead of throwing in a Core M processor. The former helps in battery life, a fan-less, compact form factor, and a cheaper price point. Essentially, the Atom x5 processor helps in Yoga Book’s pitch of an affordable, thin and light device that works well for a lot of people.

My only disappointment with the hardware is Lenovo opting for a Micro-USB charging port in a futuristic device, instead of USB-C that could’ve enabled fast charging and quicker file transfers. Other ports on the Yoga Book include a Mini-HDMI port, a 3.5mm headphone jack, and a microSD card slot.

The Yoga Book boasts of an 8,500mAh battery. While the company claims of 13 hours of battery life, in moderate usage, I could only squeeze in 8-10 hours of battery life. Claims apart, this is pretty good and you can get a full day's work on battery power. There’s a minor issue of the device not waking up after being put to sleep. It’s erratic and takes inconsistent time, and one would expect Lenovo to fix it with a firmware update.

The Lenovo Yoga Book is an impressive ambition to reimagine the tablet. The execution is in line too. It’s a premium device with beautiful hardware and long battery life, and is definitely a great companion for meetings and travel.

It’s edgy and exciting, but might not be the best choice for a primary computer. It’s not a device that one can push too far or work on for long hours and there are definite limitations of the digital keyboard and small trackpad.

Yet, if you can afford to spend $549.99 (₹49,990 in India), it’s a nice secondary device to lug around while leaving your big, bulky laptop at home. If inking and sketching is something you’re interested in, the Yoga Book sure offers a great experience on the move.