Back with another quick review for Lenovo fans, we have the ThinkPad X1 Carbon 9th Gen up for inspection.

Over nine generations, Lenovo has carved out a premium business niche for itself with its X1 lineup. Quickly iterating on a formula of thinness and power, the X1 has earned the industry perception of being the creme de la creme of business laptops. 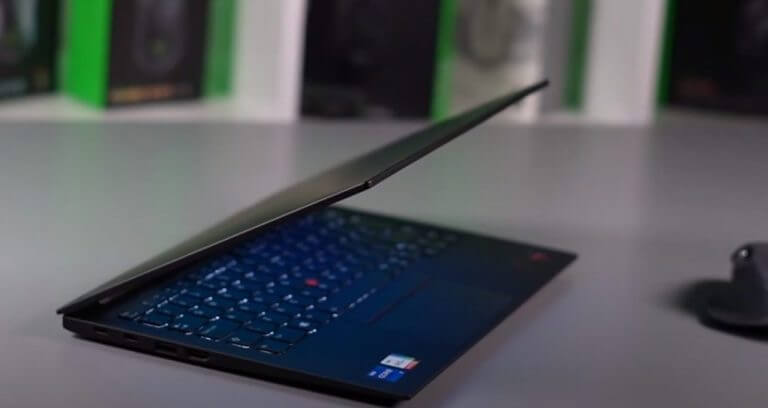 Fortunately, there is a whole internet of documented history on the X1, and the ninth generation deviates little from it, so today's review can focus on the few subtle changes that elevate this laptop from an 'also-ran' upgrade to a noticeable seat change.

As previously mentioned, the X1 has built on a steady design aesthetic that hasn't deviated much over the past few years. The X1 9th Gen maintains its stealth black vogue.

The model I reviewed came with Carbon fiber weaving on the cover, which is a slight departure from the traditional oily fingerprint magnet matte black cover of previous generations.

Another subtle design change comes with the new hinge design that ushers in a dual hinge make up versus the single bar most notably associated with the X1 line up.

Lenovo also shifted the power button on the deck of the laptop and placed it back on the right-justified of the keyboard. For the past few years, it was placed flush on the port side of the laptop making it a hassle to power on and off without muscle memory developed.

The weight and portability remain largely untouched by Lenovo's latest offering where the X1 9th Gen feels just as light as its predecessors for better or worse.

Per usual, the X1 9th Gen comes with the coveted mil-spec tested design to help protect the device from spills, extreme temps, dust, drops and other unforeseen elements.

Other familiar features are a return of the great key travel from Lenovo's U-shaped chicklet keyboard and moderately sized glass trackpad.

Regarding the port situation, the X1 9th Gen ups its game by moving to Thunderbolt 4 over the previous Thunderbolt 3 implementation from last year. Users now get two Thunderbolt 4 USB-C ports, two USB-A ports, and full HDMI slot with support for 2.0 capabilities, along with a mic/headphone jack as well. 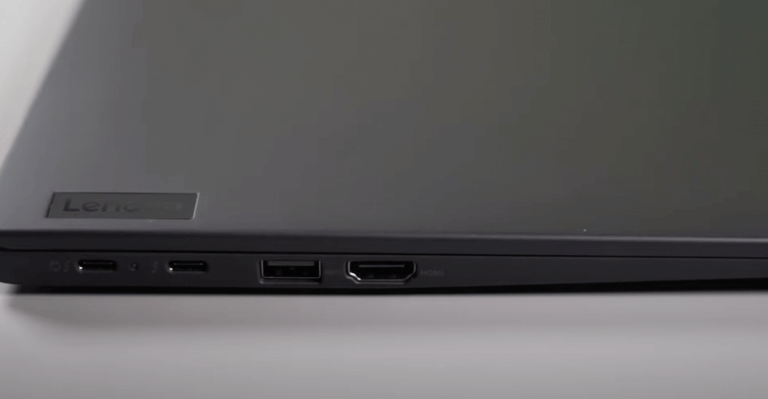 Perhaps, the biggest change from 8th to 9th Gen for the X1 is the new 16:10 display aspect ratio screen. Lenovo has finally adopted the narrower but taller screen design to give users and productivity worker better real estate to get things done.

The addition of the 16:10 screen marks a subtle but substantial seat change in the X1's history as it also brings a overall chassis design that is slightly narrower than previous models.

The black bars that come with a 16:10 screen fade quickly into the background during video watching. 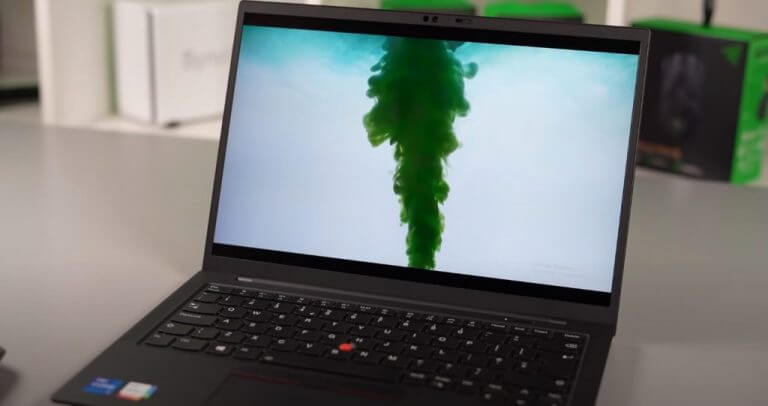 Lenovo sticks with its matte display this generation, which helps with visibility in those overly lit offices or outdoor working conditions.

After years of using a Surface Laptop and watching my wife use her MacBook, the traditional 16:9 displays truly feel outdated and counter-intuitive for a "productivity" machine.

While not much else has changed for the X1 9th Gen aside from the screen, the other largest upgrade comes in the form of the 11th Gen Intel processor.

As with most laptops coming out in 2021, Intel's 11th Gen once again proves to be the biggest upgrade for devices this year. 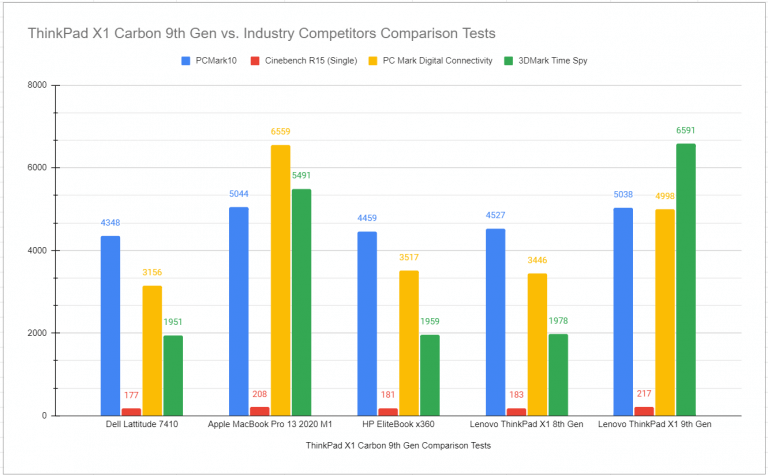 Combined with the improved graphics performance from the Intel Xe graphics spec, the X1 9th Gen packs a substantial boost in performance in 2021.

Rendering videos and exports were speedy as well as transferring files between platforms and software. I don't shoot any content in 4K but 1080p and even 2K videos 20 mins in length converted and exported in a little under 15 minutes which a world of difference from the relatively slow performance of the Surface Laptop 4. 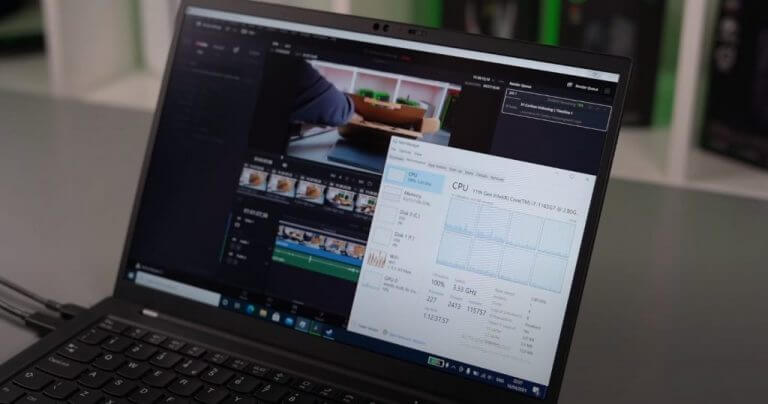 Photo, CAD, and audio editing were handled with ease by the X1 Carbon 9th Gen. Perhaps, the only blemish in its performance rankings is its gaming stats.

Pushing the upper limits of 30+ plus frames still allows for some lightweight gaming, when and/if in a pinch but don't rely on the X1 for gaming. 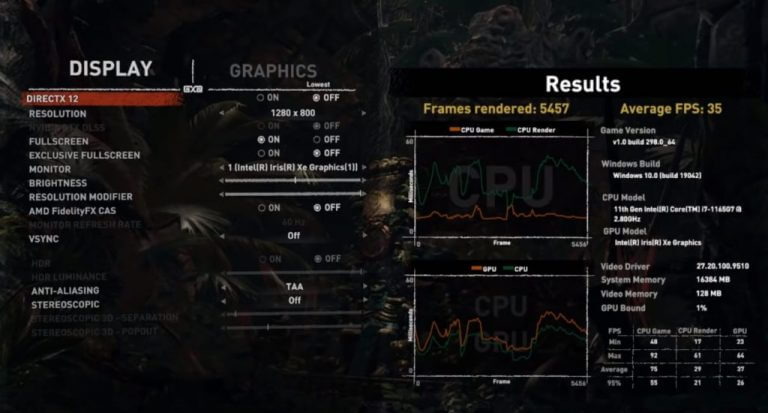 Finally, the improved battery design of the X1 9th Gen inches out its predecessor as well some of its competitors going about ten and a half hours of moderate use, 7 hours under heavy and close to thirteen with light use.

The 65W charger quickly charges the laptop and uses a USB-C lead for connectivity which allows the ThinkPad X1 Carbon 9th Gen to be charged by most USC-enabled charger.

The X1 Carbon 9th Gen is a pricey proposition in most regards which adds to its enterprise cache. However, with improved GPU, memory and battery performance coupled with the intuitive 16:10 aspect ratio, the X1 9th Gen is well worth the yearly upgrade this time around.