I toured the NYC Microsoft Store's new eSports studio - here's what I saw - OnMSFT.com Skip to content
We're hedging our bets! You can now follow OnMSFT.com on Mastadon or Tumblr! 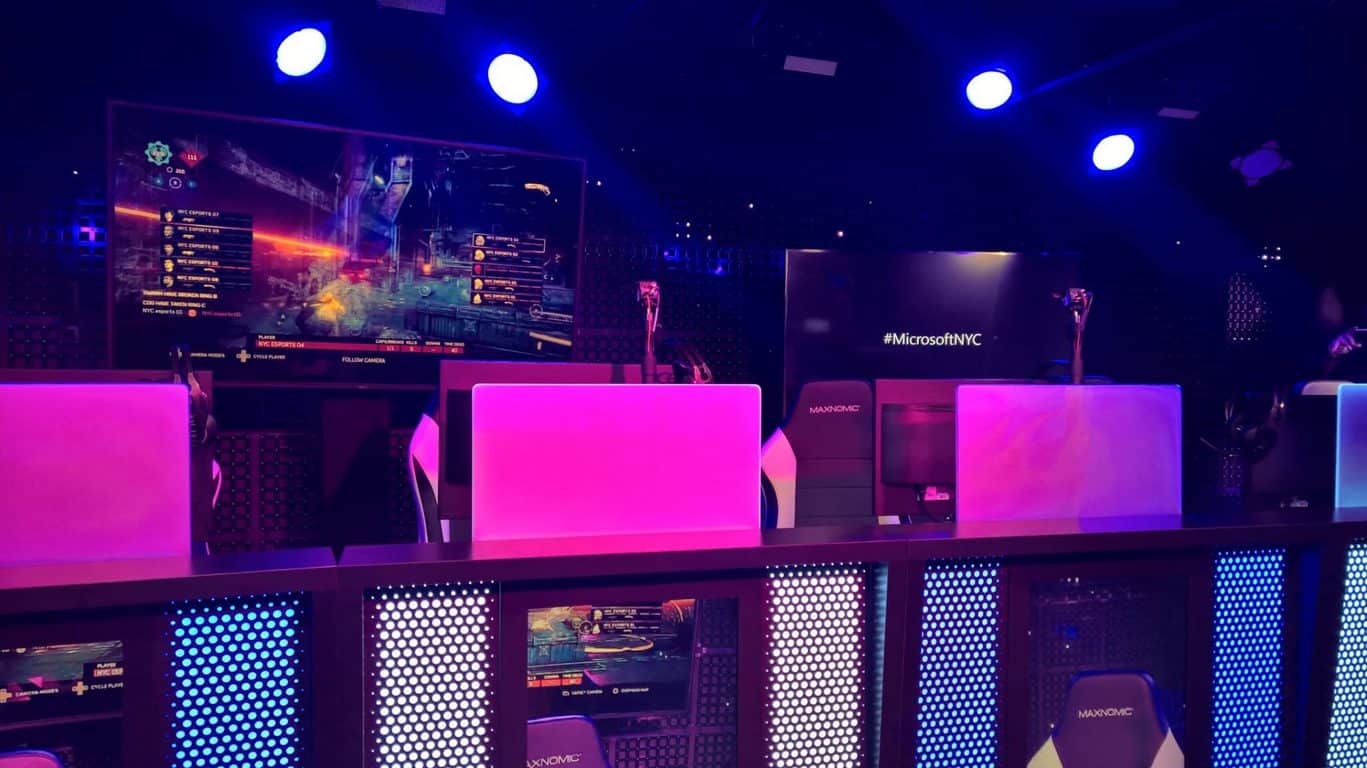 On any trip up to New York City, visiting the Microsoft Store on Fifth Avenue is always the best part. Being able to see the latest and greatest that Microsoft has to offer up close and personal is a blast, and being able to talk shop with all of the other Microsoft superfans never gets old. It's not every day, however, that I get the opportunity to see a brand new portion of the building.

For those that don't know, the flagship Microsoft store on 5th avenue recently put in an extremely high quality eSports studio, accessible to the public only for special events. As someone who frequently follows the eSports scene apart from Microsoft, hearing about the studio was a huge surprise - and I knew I had to see it for myself.

The eSports studio is nothing short of professional looking. If you've ever watched a high profile eSports event like the LCS Spring/Summer Split or the DOTA 2 International, you'll be able to recognize this setup. The screens behind the players are made up of several LED lights to display logos and other information, and the pods that the players are situated in can each display both team colors and face-cams to see player reactions. When we arrived, the stage was set for a 4v4 game - although they have the space and resources to do up to 7v7 games. For the demo our tour took part in, we played a game of Rocket League.

Where many big eSports events are prepared to hold massive crowds, the Microsoft Store's eSports studio seems like it's build around providing a small, tight-knit experience that offers a handful of people a more intimate experience. There isn't all that much space in the studio, and what space is available is mostly taken up by the shoutcasting desk and a massive room full of tech for broadcasting.

Another key difference between this studio and most other eSports staging areas is the way that broadcasting is set up. Unlike most studios that deal in eSports, events held in the Microsoft Store are going to be broadcast exclusively on Beam, the streaming service that Microsoft acquired back in August. With Twitch being the go-to streaming service for the vast majority of the eSports viewership, we'll have to wait and see if Microsoft sticks to that policy in the future.

Here's another fun note on broadcasting: we were told that the studio is already set up to broadcast on any major cable network, if they decided they needed to. We weren't told whether or not Microsoft had any plans to broadcast eSports events onto cable in the near future, but it certainly wouldn't be out of the question. ESPN 2 has already made eSports a part of their programming with events like Heroes of the Dorm, so it's only a matter of joining the bandwagon.

So, all in all, what does this mean for the future of eSports in Microsoft? It's hard to say. As much as I want to believe that this is the beginning of some grand movement by Microsoft to embrace the increasingly profitable world of competitive gaming, it's just too early to say that. It very much seems like this studio, at least for now, is a love letter to the casual fans of multiplayer gaming who want to get more interested in seeing the true competitive scene.

It's entirely possible that this studio could start seeing a whole lot more action as time goes on and games like Gears of War 4 and Gigantic work on expanding the competitive scenes for Microsoft-owned games. I was one of the first 100 or so people that have set foot inside the completed studio: It's most certainly in its infancy right now. For the moment, all we can do is sit and wait - even if Microsoft doesn't decide to dive head-first into eSports in the near future, you can bet that they're keeping this studio handy as more competitive games come to Xbox.

If you want to check out this studio yourself, keep an eye on Microsoft's eSports and Gaming webpage, where you'll be able to see if there are any events coming up soon.