Hands on with the Surface Duo-like multitasking features in the Outlook app on iPadOS - OnMSFT.com Skip to content
We're hedging our bets! You can now follow OnMSFT.com on Mastadon or Tumblr! 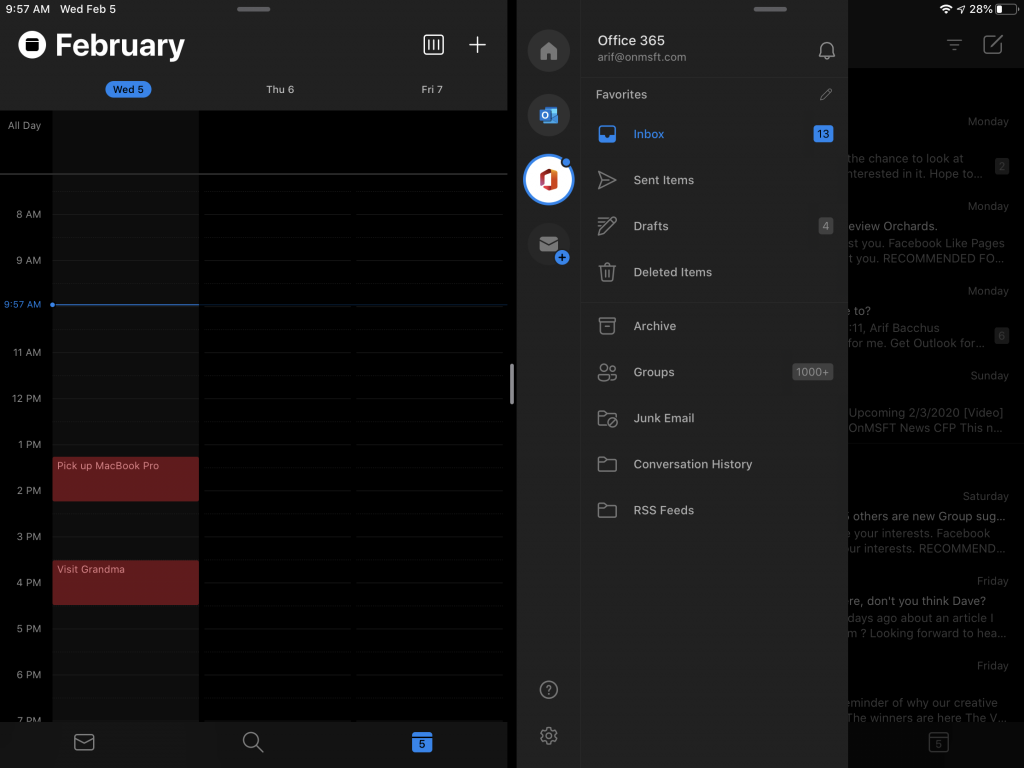 Microsoft recently released an update for the Outlook app on iOS, and it delivered new support for the multitasking features in iPadOS 13. The features are a bit reminiscent of the experience showcased with the Surface Duo back in October of 2019. Users are able to leverage iPadOS' Split View, Slide Over, and even run multiple instances of Outlook side by side.  Here's a hands-on look at the experience.

If you've used Outlook on Windows, you're likley familiar with the Windows 10 split-screen mode. You're able to stack Outlook side-by-side with any other app you have open. Well, with Outlook's support for Split View in iPadOS 13, you can now finally do the same on an iPad too.

In our example, we opened up the Outlook app while browsing through OnMSFT on Safari. This is done by swiping up to reveal the iPadOS dock, and then pulling the icon for Outlook up to the side of the screen you want to see it open on. It's a pretty nifty experience, and when trying it out, it feels like your iPad has two screens, rather than one. You're able to keep browsing through the web, text messages, or other content while still checking your messages or calendar on Outlook. This is definitely a nice way to boost your productivity and it feels a bit similar to how users would be able to stack apps side by side on Surface Duo's two screens.

Slide Over mode for opening Outlook on top of another app

Another feature now available in Outlook on iPadOS is the support for Slide Over. With this element, you're able to open Outlook on top of a full-screen app. Again, it's done by pulling up on the dock in iPadOS and pulling the Outlook icon out and on top of whatever window you have open. It's a pretty neat experience, as Outlook "pops" out in a similar size to an iPhone app, and will float over what window you have open. In our case, that's Microsoft Edge. You're able to peek at your email or calendar, while still browsing the web, or working inside a primary app. It feels similar to how users would be able to send apps from one screen to the next on a Surface Duo. Another boost for productivity.

Next up, there's the ability to use multiple instances of Outlook simultaneously. We tried it out by opening up the Outlook Calendar alongside the emails in Outlook. It works just like the other features. Simply pull up on the iPadOS dock, and pull the icon for Outlook up to the side of the screen you want it on. This feature was pretty nifty too. We were able to use it to see two separate email accounts side by side. This can be plenty useful for those who have multiple accounts in Outlook and want to see them simultaneously.

Finally, there is support for drag and drop. With this feature, you're able to highlight and drag text from another app and into the Outlook app. It's a nice feature and really reminds us of the Surface Duo's ability to drag stuff from one screen to the next. In our example, we opened up an article and dragged the text from an article in Microsoft Edge and into an email in Outlook. This also works for photos too, and its a great way to save time when looking to move stuff from one app to another.

A preview of Surface Duo?

Of course, all of these cool multitasking abilities are not designed by Microsoft. The features are all part of Apple's iPadOS operating system, though credit goes to Microsoft for taking advantage of them. Apple's own apps have supported these abilities for a while, and it's great to see Microsoft now getting in with it too. Microsoft has its own dual-screen smartphone, the Surface Duo coming soon, and a lot of these features in iPadOS seem to have inspired Microsoft's visions.