Dell 27 4K USB-C Monitor (P2723QE) Review: A do-it all monitor for productivity and beyond

In working from home, or dealing with the new hybrid work normals, a monitor that can do it all for you is a must. You’ll need something that looks sleek, is convenient to set up and use, but is also modern with a high screen resolution and speakers, and a microphone. This can help ensure that you can multitask and get your work done right.

Dell sent me the Dell 27 4K USB-C Monitor (P2723QE) for review, along with the optional Dell Slim Soundbar SB521A. After trying it out for two weeks, I think the two products check all those boxes, and make for a perfect combination for work and beyond. 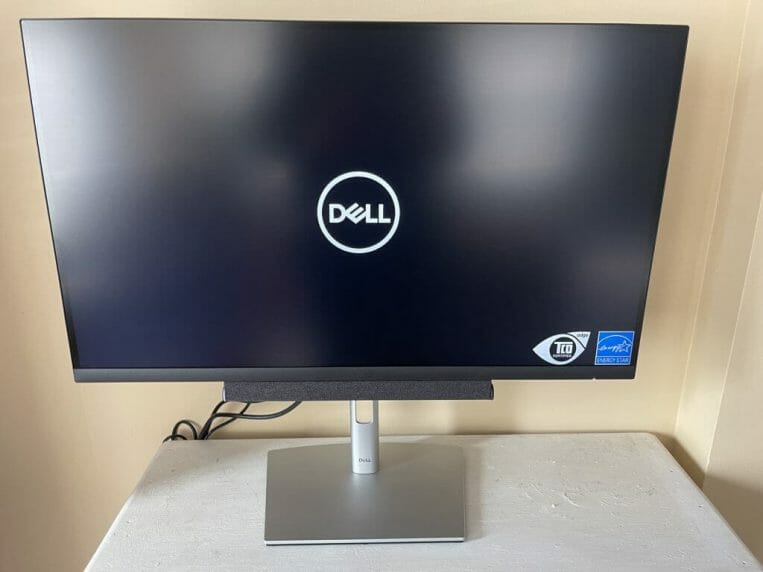 Priced at $730, the design of the Dell 27 4K USB-C Monitor (P2723QE) fits in with what you’d expect from a premium Dell monitor. It’s not overly flashy, and it’s not too dull, either. You get the signature platinum silver finish on the rear, a clean black finish up front along the bezels. And speaking of bezels, the monitor sports a slim three-sided bezel, though it still has a small bottom chin, with no Dell branding.

Bezels are slim, but the base is also minimalist, allowing you to fit more items on your desk. Improved cable management also means you can hide the cables connected to the display. Dell even says the monitor uses 85% PCR (Post-consumer Recyclable) plastic in the design. 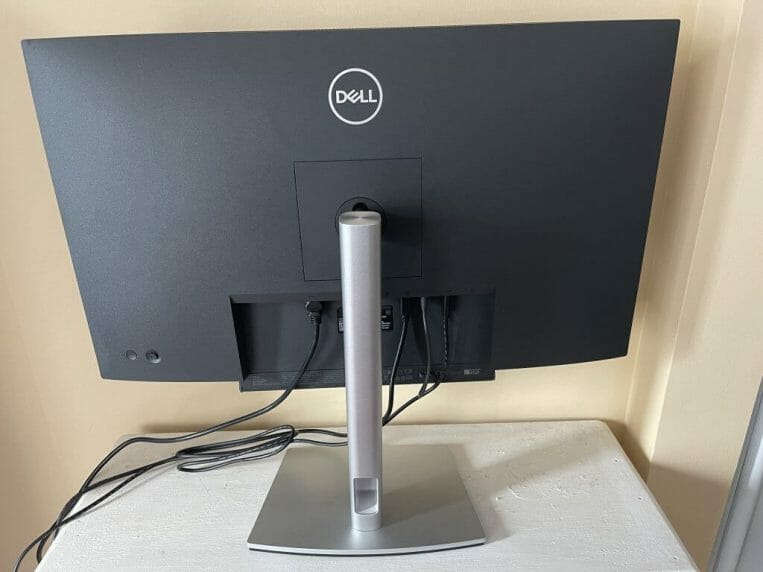 As usual, Dell’s design also allows for full control of the monitor. It’s height-adjustable up to 120 mm. It can tilt from -5 to 21 degrees, swivel from -45 to 45 degrees, and pivot from -90 to 90 degrees. That pivot angle means you can turn the monitor fully vertical if you’d like. Other key elements of the design include joystick controls, which I’ll get into next. 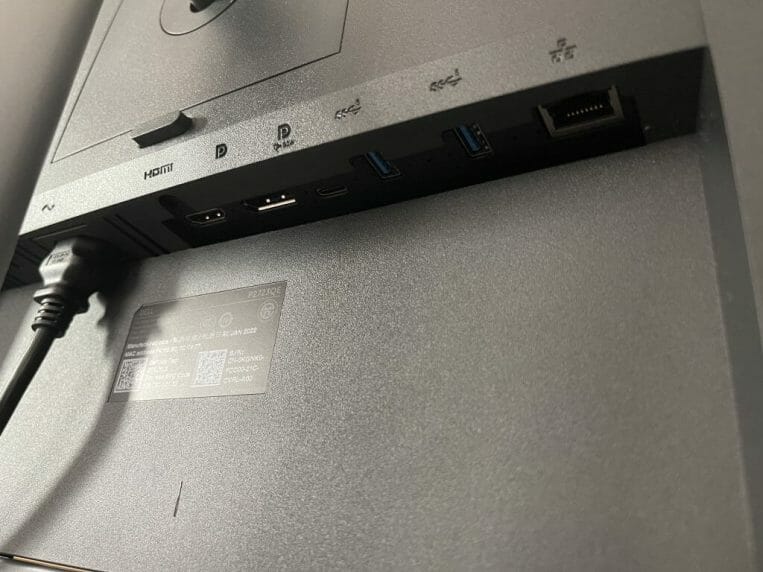 As a USB-C monitor, there’s a lot going on with the ports that make the Dell 27 4K UP2723QE convenient to use at home or in an office. The mix of ports includes 1 DisplayPort 1.4 port, 1 HDMI 2.0 port, 1 USB-C 3.2 Gen 1 upstream port with PD up to 90 watts, 4 SuperSpeed USB 3.2 Gen 1 downstream ports, and an RJ45 jack.  Note that the DisplayPort is compatible with Dell Express Daisy Chaining if you’d like to link two of these monitors together.

USB-C is what makes the UP2723QE convenient to use. With most modern laptops carrying USB-C these days, this means you can use a single cable for power, charging, and data for a connected PC. I hooked up my Surface Pro 8 up to the display and ditched my Surface Connect Charger. One USB-C cable did it all for me, and I am sure it will for you, too. 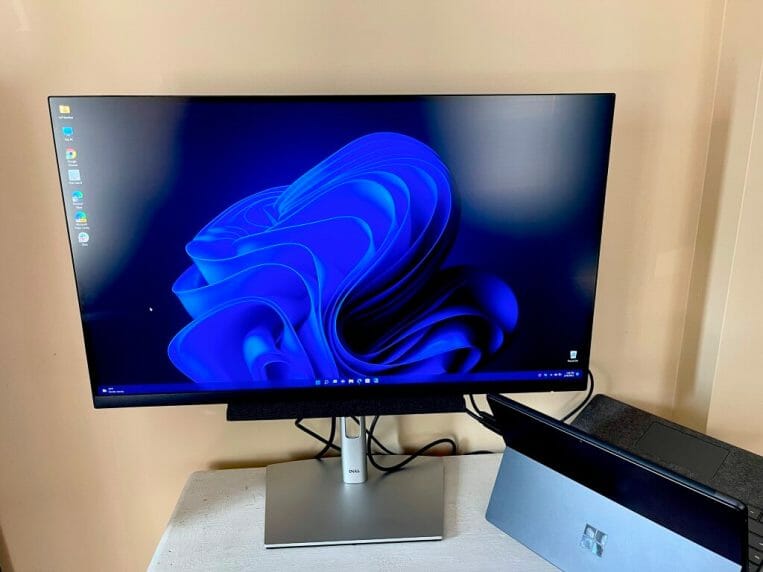 In addition, the RJ45 jack on the back, and USB-A ports on the front bottom bezel of the monitor mean that the monitor became my hub, without the need for hooking up a dongle to my PC. On Dell systems, there’s even an instant “jumpstart,” where pressing the power button on the monitor will start up your monitor and the connected PC.

As for things outside of work, I hooked up my Xbox Series X via HDMI 2.0 port, I am happy to report that it fully supports 4K UHD resolution, at 60 Hz, but more on that later. I also used the HDMI connectivity with non-USB-C devices, like an older Chromebook. This shows how versatile the monitor is, as USB-C isn’t the only option.

I do wish that the monitor carried a traditional 3.5 mm headphone jack for audio, as the optional soundbar Dell sent me with this monitor only works on Windows or Mac PCs, and not game consoles. I resorted to using headphones on my Xbox and PS4 controller when gaming. Again, though, the monitor is catered for productivity and not gaming so the omission makes sense. 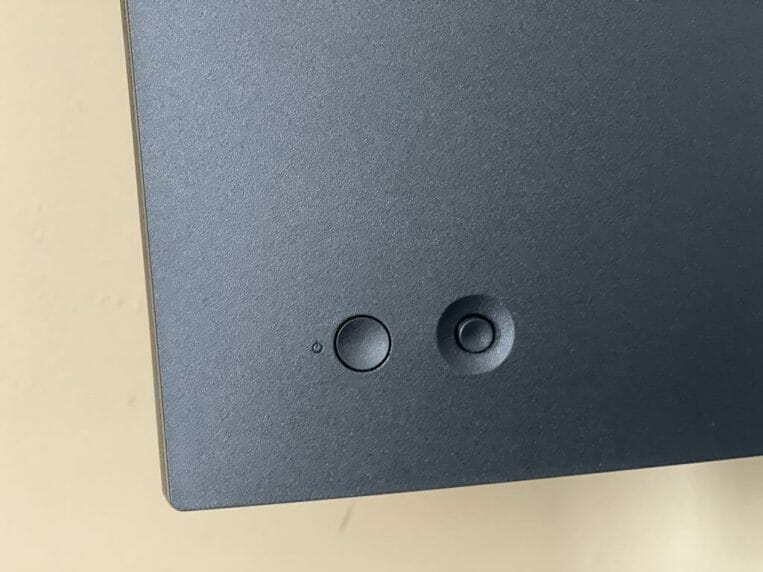 As far as buttons go, there’s a joystick to control the various functions of the monitor. A single tap brings up menus for input options, the preset modes, or brightness options. Pulling up brings the full menu, which lets you change between the color modes, aspect ratios, and sharpness, USB-C options, customizing menu keys and the power LED options. The joystick is so much easier to use to control the monitor when compared to buttons, which require multiple presses. 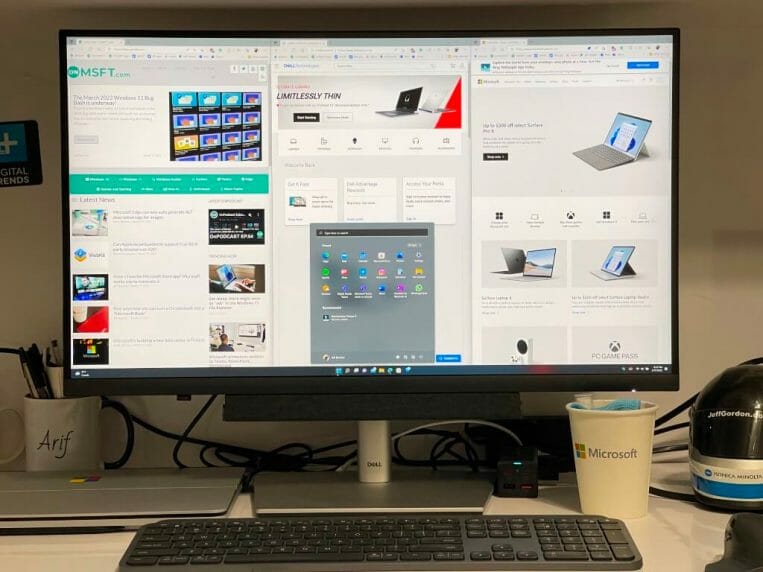 According to our colorimeter, the Dell 27 Inch 4K USB-C Hub Monitor nets some good results for a display with an IPS panel. It hits about 350 cd/m² brightness, has an 8ms response time, 1000:1 contrast ratio. It also hits 99% sRGB coverage right out of the box. Dell also mentioned to us that the monitor sports ComfortView Plus, a built-in low blue light screen that reduces harmful blue light emissions without sacrificing color.

But enough with the numbers. For productivity, this display performed great. 4K resolution means I was able to fit three column-sized Microsoft Edge windows side by side by side on the panel using Windows 11’s Snap Layouts feature.  It also means videos and Teams calls look crisp and clear.

When editing my weekly podcast, I appreciated the extra space on my video timeline in Filmora Wondershare that the 4K panel adds. And, during the call itself, I was able to make out more of my own background, with the connected Dell 4K webcam that I previously reviewed. I even was sitting in direct sunlight, but the anti-glare panel did its job, and things didn’t look too washed out. 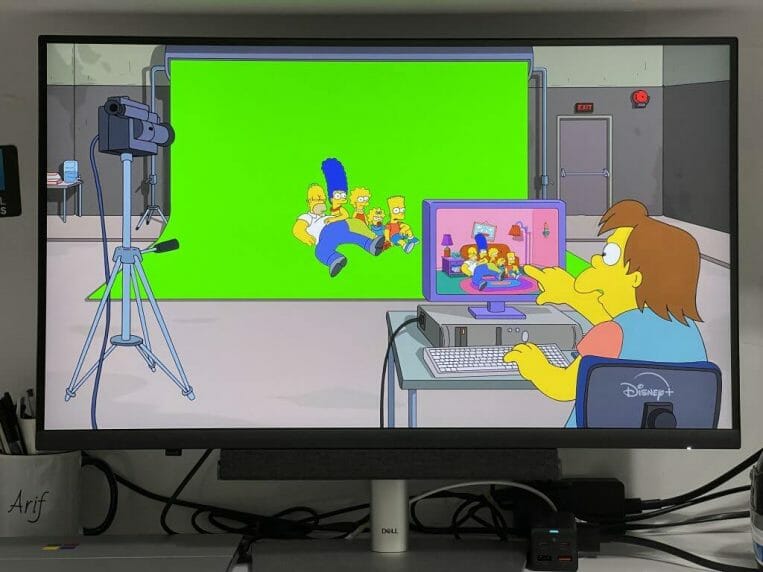 When it comes to other things, like multimedia and gaming, the monitor will surprise you. You might think the brightness and contrast ratios are only for productivity, but when I watched episodes of The Simpsons, the yellow color in Bart Simpson’s skin and colorful jacket of Krusty the Clown looked pretty vibrant and life-like. Even when gaming in Forza Motorsport 7, I noticed extra colors and the shimmer of the blue and Yellow NAPA logo in the paint job of a Chase Elliott stock car. Do note, though, that this isn’t a gaming monitor. For that, I suggest checking out Alienware’s lineup. 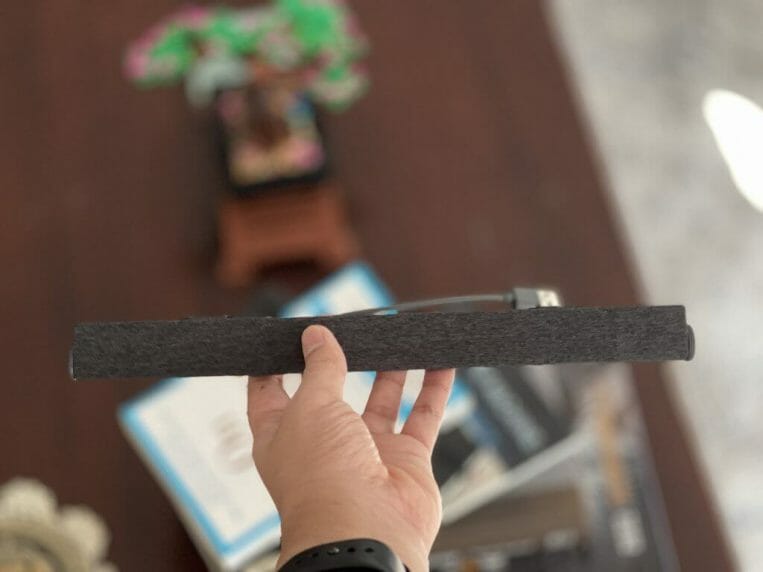 As I’ve mentioned multiple times throughout this review, Dell also sent me the optional Dell Slim Soundbar SB521A. It’s an optional $55 add-on for the monitor and lets you connect a speaker system, without taking up desk space. Dell claims this as the world’s slimmest and lightest soundbar. I agree, as when I held it in my hands, it was nearly weightless and just as thick as my thumb.

For productivity, it is something I really appreciate. The soundbar attaches magnetically to the bottom bezel of the monitor and plugs into the back of the display via USB-A. It stays in place without moving around. For my setup, it meant I didn’t have to use dedicated speakers with my PC. Instead, my monitor ended up doing everything for me. 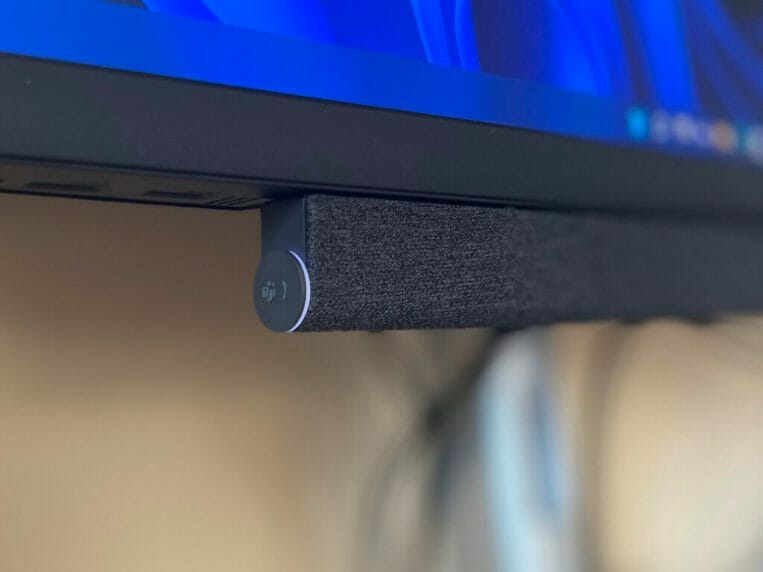 The soundbar even has a light-up Teams button on the left to launch Teams or answer calls. There’s also a volume slider on the right that lets you control the volume. All of these controls came in handy for quickly controlling Teams’ calls at a touch, which I spend a lot of time in these days.

In terms of quality, the soundbar has powerful 3.6W RMS speakers offering a wide frequency response range of 180Hz to 20kHz. I am not an audiophile, but during my Teams calls, everyone sounded clean and crisp. Everyone also reported that I sounded clean, too. It felt like I was in the conference room, but when I played music through the speakers, I didn’t feel enough bass. Again, it’s a conference room speaker, and not a boombox, though.

I’ll end with the extra software, Dell Display Manager, that comes with this monitor. Dell Easy Arrange can be used to tile applications across your display with pre-set window partitions. You also can enjoy an auto-restore feature, where the monitor remembers where you left off, so applications go back to how you left them.

Checking all the boxes

For anyone who needs a monitor for expanded productivity, the Dell 27 4K USB-C Monitor (P2723QE) is an excellent option. 4K resolution means you can multitask with more on your screen, and USB-C means you can hook up the display to any of your modern laptops without worrying about dongles. The display itself is also bright and accurate, so much so that you can get away with some casual gaming if you hook up a console to the HDMI port. The optional speaker bar also adds to the convenience, so that you can sound clean and crisp during Teams, Zoom, or Skype calls, without having to deal with headphones, or a traditional speaker system.