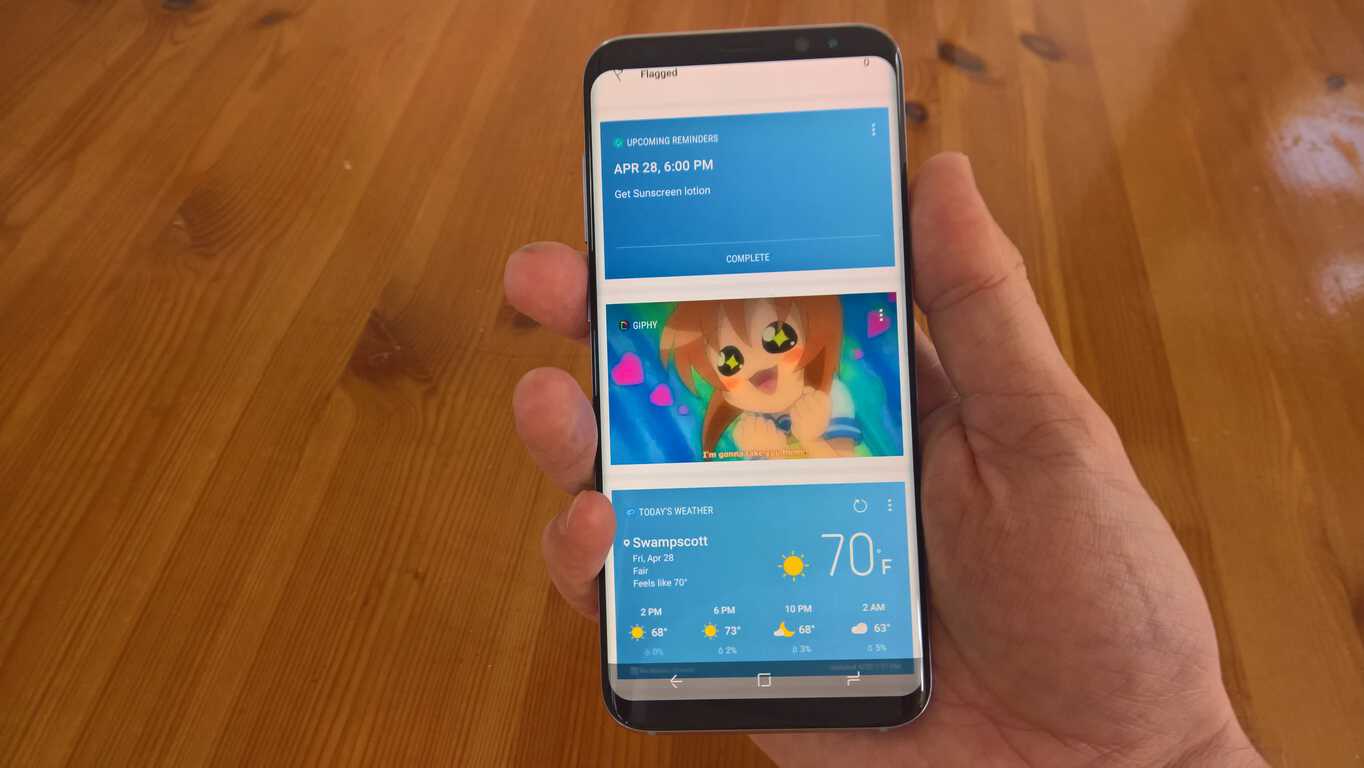 Now that the complete features of Bixby are available with the release of Bixby Voice to all US users, I decided to share my views on how Bixby compares to Cortana. Since abandoning Windows 10 Mobile for Android, I was able to upgrade my Lumia 950 to the Samsung Galaxy S8+ on AT&T. Fact: The Samsung Galaxy S8 and Samsung Galaxy S8+ are the best phones out right now. They're big, they're beautiful, and they are blazing fast. Samsung is looking to enter the digital assistant market with Bixby.

In my opinion, Microsoft's Cortana is second in line to the throne among digital assistants, easily beating out Google Assistant and Siri, but still falling slightly behind Amazon's Alexa; at least for the time being. Samsung is using many Bixby features that remind me of old Windows Phone 8 applications that used to be available; including JobLens and CityLens.

Samsung claims Bixby is a "new way to interact with your phone." Microsoft's Cortana is already able to do many of the same things that Samsung's Bixby can do. However, there are three things that Bixby can do that Cortana can't: context awareness, cognitive tolerance, and completeness.

Here is a look at Bixby in action:

Cognitive tolerance refers to how Bixby understands what action you intend to complete through voice commands. As the number of Bixby commands undoubtedly grows, in theory, you won't need to remember all the new Bixby commands. Instead, Bixby will be able to understand what command you are trying to give, even if you are giving incomplete information; Bixby will try to complete the command based on its best guess. With Cortana, this is another

As far as completeness is concerned, Bixby is able to support almost everything any Android application is able to complete using the traditional touch interface. Samsung claims that Cortana and other already available virtual assistants can only complete a few selected task for applications. Whereas, Bixby can do almost anything that an application can do via touch, just by using your Bixby Voice.

Bixby Voice appears to offer more options than Cortana at the moment. I just recently received the Bixby Voice update. For some reason, it appears that AT&T Samsung users were left out of the Bixby Voice beta program. Bixby is easier to access than Cortana on a phone. Instead of relying on saying "Hey Cortana," the Samsung Galaxy  S8 and S8+ have a dedicated Bixby button.

Plus, you can use Bixby Voice to change your phone settings, like background and ringtones, whereas Cortana is not quite the same experience when used on operating systems other than Windows 10 Mobile. That is not to say Bixby is not without its disadvantages.

One big problem that Samsung faces with Bixby is big data. While Samsung had very little problem with delivering Bixby Voice on the Galaxy S8 and S8+ in its native South Korea, transferring the same user experience to English and other languages has proved to be a challenge for Samsung. Microsoft is already an enterprise pro when it comes to handling the issues that come with analyzing and compiling big data, so Cortana has little, if no problem with that.

Cortana is better in the car

I will say that one thing I miss about Windows 10 Mobile is pairing my phone over Bluetooth in my car. On Windows 10 Mobile, I was able to set up Driving Mode within my Lumia 950 phone settings. On Android, it appears that you need to download multiple apps to handle all of the things that Cortana is able to handle in your car, hands-free.

Unlike Cortana on Android, Cortana on Windows 10 Mobile can help you read and respond to your text messages while driving. Even if you are listening to music and driving directions, Cortana quickly interrupts you to read off any text messages you might get while driving. When you are finished reading and/or responding to a text message, Cortana resumes your music and/or driving directions, without you having to touch or say anything. Bixby is not yet able to mirror what Cortana can already do in a car.

Bixby is a Social Experience

At the moment, Samsung is looking to turn Bixby into a social experience. While still in its infancy, Bixby is split into four areas: Bixby Home, Bixby Reminders, Bixby Vision, and Bixby Voice. Bixby Home has much of the same feed details that you get with Cortana; local news, trending news topics from Twitter and Facebook, recent photos, etc.

Bixby Reminders integrates with Bixby Home and Bixby Voice and offers the typical reminder feed for upcoming appointments, and reminders, based on time and locations, for the day. Bixby Vision is in no way revolutionary, but is another way Bixby offers a more enhanced experience.  Bixby Vision allows you to find products online by using your camera, but also opens the door to more interesting ways of applying Bixby Vision in other useful scenarios for real-world usage.

I believe the overall UI experience that Bixby provides appears to be a big problem for Cortana, at least on the mobile front. With the announcement that Windows 10 on ARM won't be coming to current Windows phones, Microsoft looks to be hitting the refresh button on its mobile market aspirations. So unless Microsoft plans to bring Cortana to Android as a more native UI experience, the only way you'll be able to use Cortana will be on Windows 10.

Turn 10 reveals the first 167 cars in Forza 7, check out the highlights here