Being creative using Windows: Clipchamp Review - OnMSFT.com Skip to content
We're hedging our bets! You can now follow OnMSFT.com on Mastadon or Tumblr! 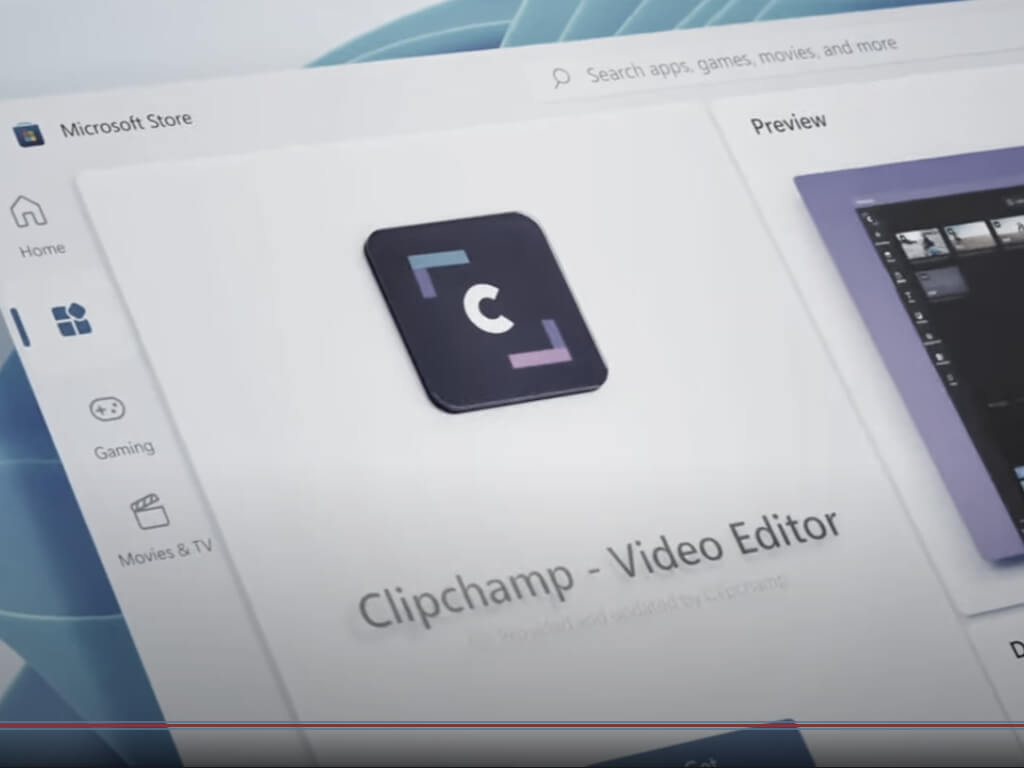 Over the past year, I spent time exploring content creation in a more concerted effort. As someone who works in marketing, I've been tangentially involved with creative assets and content, but not much in the way of actual hands-on creation or even the more laborious task of editing. I'm a daily Windows user and while I don't lean on the perceptive crutch that it's a platform for task-oriented projects versus one for creatives, it has been my reality for some time.

However, the pandemic evolved my workflow, workstation tools, and general thought process about what can be done with the platforms I'm currently using.

In this series, I'd like to explore the understated accessibility to creative tools available on the Windows platform and whether we can put the clichéd notion that macOS is the only platform where things get created on to bed.

First up is my review of Clipchamp as a video editing solution for Windows users. Microsoft just announced the acquisition of Clipchamp, so it's a good time to take a closer look. 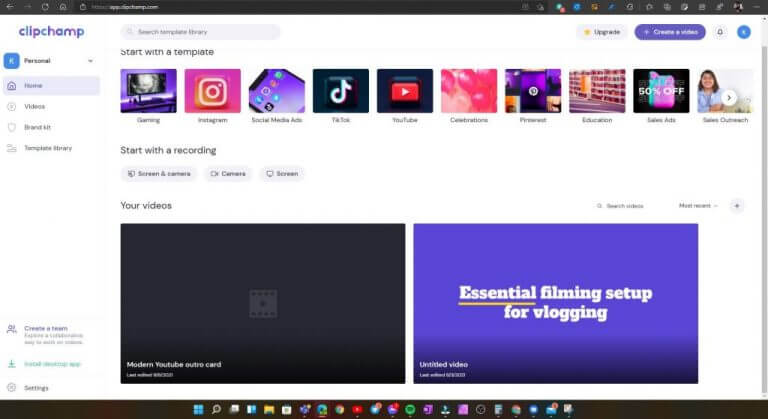 While some people can whip out a relatively svelte MacBook Pro atop a coffee table and get to work to crank out an hour or two of video editing, my personal experience has been that Windows users need to scurry to dedicated workstation towers to accomplish similar tasks. It's not that video editing can't be done on a Windows machine, but that it must be a planned, coordinated and "professional" undertaking for most users.

Fortunately, video editing is becoming a bit more of casual experience on Windows and its thanks in part to software such as Clipchamp, which is a browser-based video editor that brings enough tools and flexibility to be accessible by a range of content creators on most modern Windows PCs. As a browser-based platform, Clipchamp users can enjoy the benefits and features of a modern video editor without having to invest in a new, more powerful machine or developing intimate knowledge about SSD's, video cards, or types of RAM.

Due to its browser-based development, Clipchamp is a platform that's even easier to access than more traditional app-based downloads. Instead of having to go to an app store or site and doing the search, download, executable approval and waiting dance, users can simply head to their preferred browser and begin working on their projects quickly. Another benefit in its browser-based make up is that it's relatively light on CPU resource management as well as leveraging cloud-based saves to pick up and edit from practically any other PC on the go.

Not everything in Clipchamp land is skittles and roses. There are quite a few limitations for moderate to professional level video editors to make note of when using Clipchamp such as limited color grading settings, compression, 1080p max resolution support, limited editing tools, and memory management on lengthy projects.

However, as entry-level video editing platform Clipchamp has surprised me on quite a few occasions.

In my time using Clipchamp I've found the UI to be one of the best ones I've encountered. While it doesn't pack as many features, the Clipchamp UI and timeline is uncluttered and straightforward. There aren't hidden menus or buried feature drawers like with other video editing software. A two-column menu sits to the side of the timeline and playback window which holds all of the features and sub menus necessary for operating Clipchamp. For anyone new to video editing, the Clipchamp UI is very intuitive and accessible enough to get started with zero previous video editing experience. 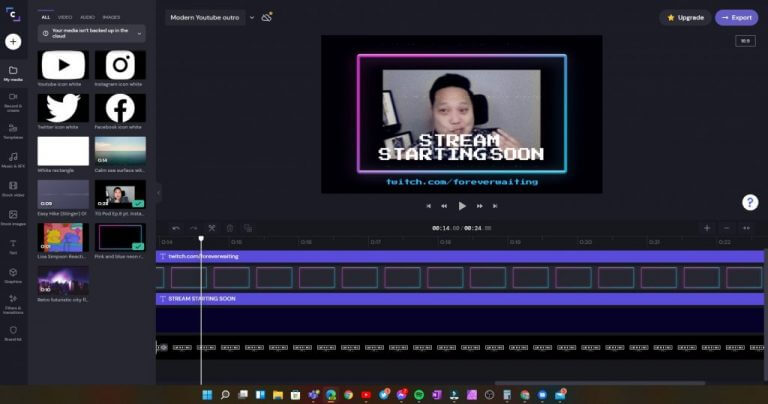 In addition to the easy to access features of Clipchamp through its minimal UI interface, the platform also makes use of automatic Clip Optimization upon upload. What usually requires a prompt or prior navigational knowledge of other platforms, Clipchamp automatically adjust uploaded content, so users don't have to manually convert formats from WAV, MP4, H.246, MOV or M4V. Minutes saved.

What also makes Clipchamp a great value add to any video content creation setup is it modern development which incorporates social media exports as second nature. Many of the templates available on the platform are designed with specific social media audiences in mind, so anyone looking to create a specific style of video to be viewed on YouTube, Instagram and even TikTok will most likely find what they need already built out.

Marketers such as I will only need to the raw footage to meet content calendar deadlines when unique events occur, or late breaking cultural moments can be capitalized quickly and efficiently using Clipchamp. I saved minutes to hours being able to use Clipchamp's templates to drag and drop content without having to worry about export sizes, aspect ratios, links, or customary asset placement per media channel. Yes, these things can be saved as templates in other editing platforms, but these are offered out of the box for Clipchamp. In addition, the library of filters, titles, audio, SFX, stock images and graphics are all updated server side and kept relatively up to date by Clipchamp, which means finding the next meme-able design is only a few clicks away at any given time. 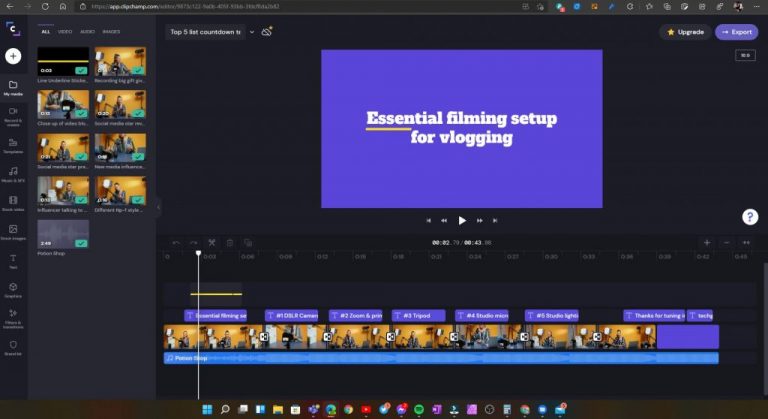 As I previously mentioned, Clipchamp utilizes Cloud Sync which allows users, with the initial time, to upload their projects in their entirety to the cloud and pick and go on other devices if the editing process is an in depth one. A scenario I've utilized was shooting footage on my phone or camera then transferred that content to Clipchamp via cloud sync via my Surface Go 2 and picked up editing on various computers when I was back in an office setting.

In the end, Clipchamp revitalizes the old Windows Movie Makers user in all of us still using Windows for content creation, editing and management. Considering the latest news, Clipchamp should not only bring back but modernize Microsoft's in-box editing solutions.

While YouTube is littered with videographers and content makers who push expensive video editing tools that make the process look daunting and exclusive to a single ecosystem, Clipchamp's pick up and go design is just what beginner or casual video editors need to develop a process of their own.

There is no need for a fancy $1,800 MacBook, $1,000 PC tower, 8GB plus downloads or overly complicated and unintuitive software to gatekeep the process of content creation these days.

As a Windows user, getting started with content creation on the platform hasn't been as easy or design-friendly as it is now.