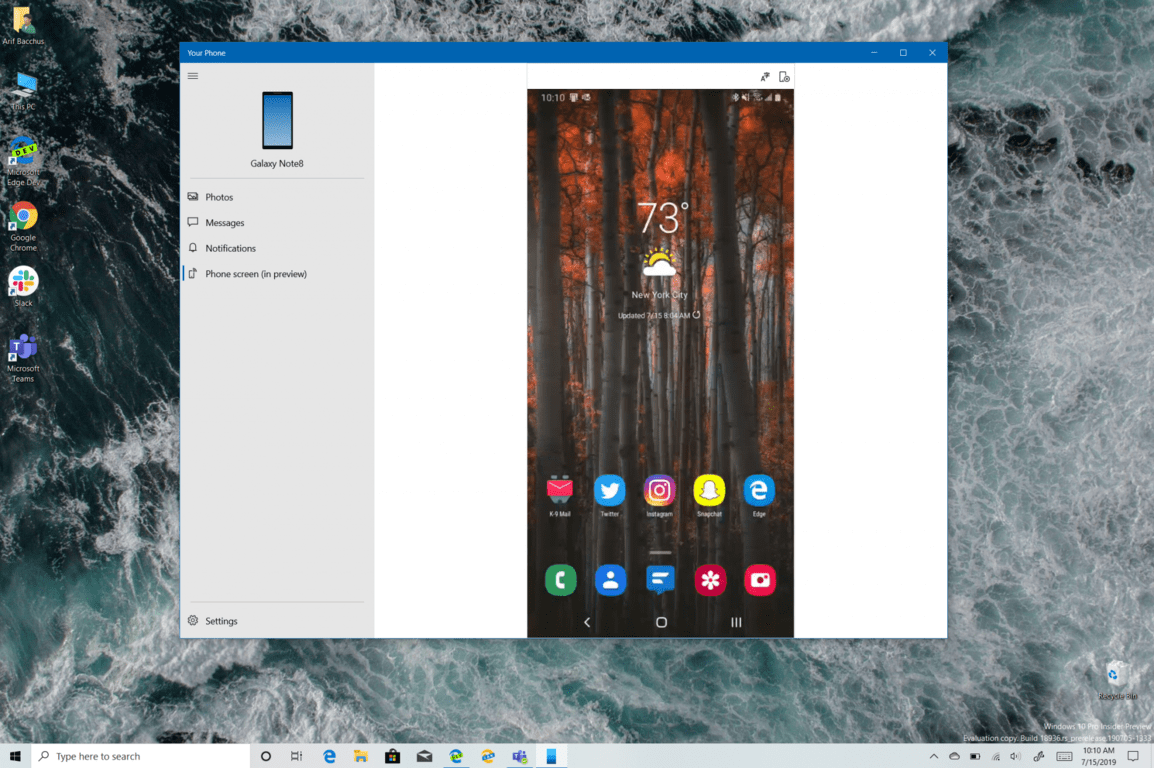 Microsoft's Your Phone app on Windows 10 is truly great if you're an Android user. Similar to the synergies with iOS and macOS, you can get your text messages, notifications, and recent photos right on your PC without even touching your phone. But, if you're a Windows Insider, the Your Phone app can go a bit beyond that.

The reason why? You can mirror and control or type on your Android Phone and Android Apps from your PC while it is still in your pocket. The experience is known as "Phone Screen" and is still a work in progress, but we recently spent some time playing around with it. Here's more on what we think.

Granted that you've already installed Your Phone app on your Android device, you can get started with Phone Screen by pairing your Android phone with your PC via Bluetooth. You can do so by clicking the Phone Screen section of Your Phone. For the first time, the app will assist in the process and will give you prompts on how to pair, but you can also manually pair by going to the Windows 10 settings.

Once paired, you need to keep Bluetooth on and your phone and PC connected to the same network and router, be it wired, or wirelessly. You also need to grant some permissions and agree and press "Start Now" on the prompt that appears on your Android Phone. This security feature just alerts you that Your Phone companion will capture everything that is displayed on your screen. You can stop this from appearing by clicking "Do not show again."

Keep in mind, Phone Screen will only work if your PC and Android Phone are on the same network, and with Bluetooth on.  However, given that the Your Phone App can already sync messages and photos through WiFi, we're a bit curious as to if Microsoft could get Phone Screen working with just an LTE connection.

In our setup at our home office, we have a very fast fiber optic connection, but we still experienced just a slight bit of latency when playing around with Phone Screen on Windows 10. For our initial tests, we kept the phone and the Surface laptop as close as possible to our router.

When opening up and interacting with Snapchat, WhatsApp, and playing Dr. Mario World, there was just a slight delay between what actually appeared on the phone's screen and what appeared on our Windows 10 PC. It's barely noticeable, and it still felt as if we were holding the Android phone in our hand, rather than looking at a stream on our PC.

The experience is especially cool because Snapchat and many other Android apps are not available on Windows 10. Despite that, there were just a few issues with the touch controls on our Surface with Phone Screen. For instance, it wouldn't always recognize our touch inputs when sliding to dismiss notifications on the Android drop-down menu, forcing to use the mouse to control our phone instead. Responding to messages using the keyboard on our Surface Laptop also worked well, and there was no delay when typing.

See a demo of Phone Screen yourself in the video below. Audio is not available in this clip, as the audio from our Android phone is not streamed to the PC, but rather to the phone itself.

Phone Screen is still in beta, at least for now

Cool as it is, Phone Screen is only compatible with a few phones and PCs. Microsoft has a list right here, but the majority of supported Android phones range from the Samsung Galaxy S8 to the OnePlus 6T. Supported PCs include the Surface Go, Surface Laptop, Surface Laptop 2, Surface Pro 4, Surface Pro 5, Surface Pro 6, Surface Book, and Surface Book 2. These Surface devices, though, must be running the latest Bluetooth driver updates (Marvell 15.68.17013.110.) Phone Screen might work on other PCs, as long as it supports Bluetooth Low Energy Peripheral Role, but that's not guaranteed.

Many might argue that it's not "fair" that Phone Screen is not supported on all Windows 10 devices, but this only ensures maximum compatibility and the best possible experience. Microsoft promises it will add more PCs and Phones to the supported devices list over time.

Phone Screen is the start of something great, but there are still some missing features...

Microsoft is still working on the Phone Screen experience, and there are a few things that could be added. As most mobile phones are often used for calls, a feature that allows users to place calls using Phone Screen (and stream the audio to the PC instead of the phone) would be very appreciated. Similar to Dell Mobile connect, a feature for using your PC as a Bluetooth speaker could also increase the potential usage cases of Phone Screen. With the feedback from Windows Insiders, though, Microsoft will likely add more features as time goes on, so this is definitely the start of something great for Windows 10.

Save big on more than 500 Xbox games during the Xbox Super Game Sale, available now through July 29