The Lenovo Ideapad Miix 520: An evolution that won’t last long 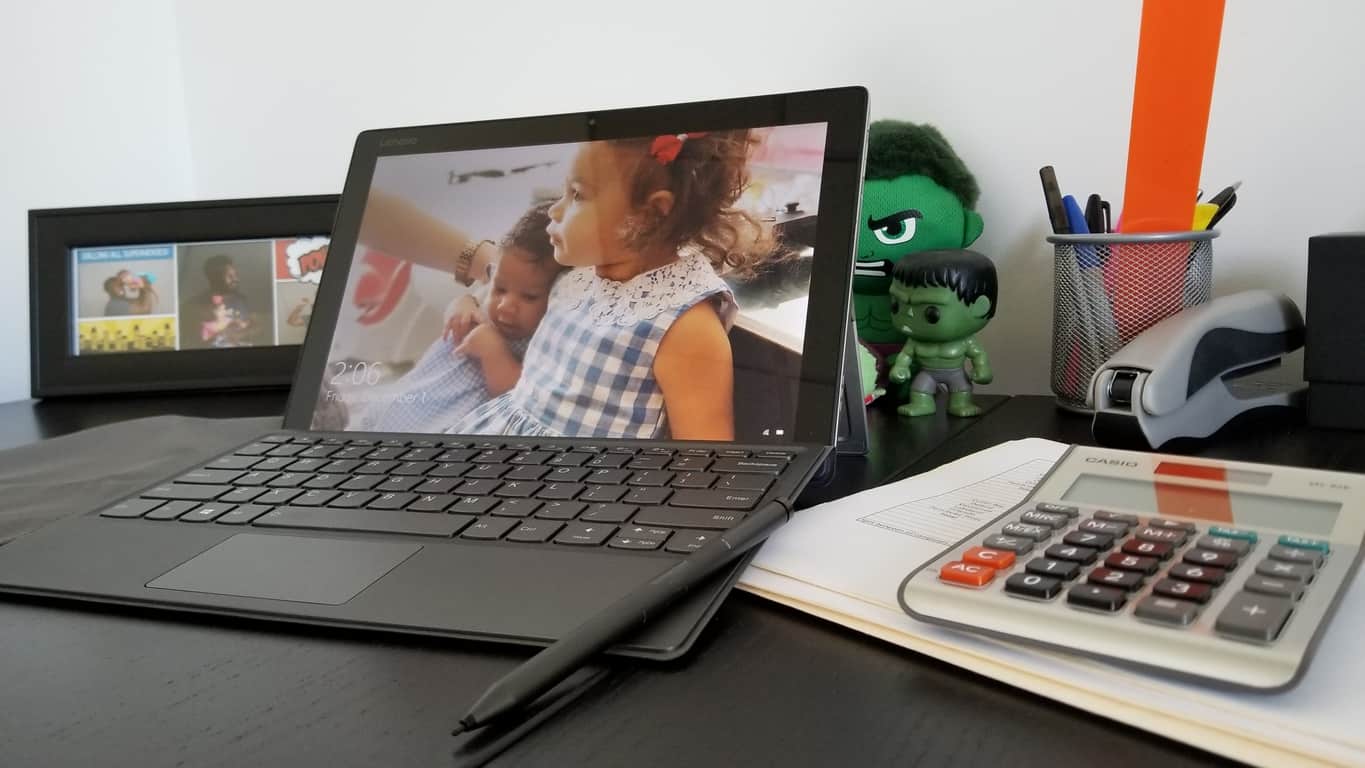 I think at this point, customers have spoken with their hard-earned dollars that they want their 2-in-1’s in two shapes for their multipurpose computing life. Long gone are the days of shifting panels, rotating screens, and experimental mobility hinges when trying to sell the latest laptop-turned-tablet device.

Enter Lenovo’s latest tablet computer hybrid, the Lenovo Ideapad Miix 520, which looks to refine the offering of a 2-in-1 by providing customers a crisp 1080 IPS panel at 12.2 inches, bundled keyboard and pen accessories, 8GB DDR RAM and 256 GB of SSD.

For $973.63 USD, the Miix 520 checks all of the modern day checkboxes and does so with some exquisite enterprise design flares as well as offer serious contender to the Surface Pro in terms ergonomics, style and most importantly, price.

Unfortunately, there is an undeniable flaw that mares most of the hard work put into this device and ultimately calls into question the overall likelihood of success for the Miix 520 in the future.

I’m still a kid in this regard as I want to get the worst parts over with as quickly as possible so I can enjoy the good for as long as I can, with that said, strap in for your healthy dose of poor battery performance and questionable hardware decisions-coated vegetables.

The battery life on the Miix 520 is poor to put it nicely. My on-screen usage time hovered around 2-4 hours which would have been splendid had this device come out in 2007, but almost a decade later, OEMs are pushing usage limits to the 8-10 mark. I’m not sure if it’s the 1080p screen, 8th generation Intel i7 processor, being a Windows 10 Insider or a combination of all three, but I was routinely anchored to a cord and power outlet. I don’t mind being wall bound but for a 2-in-1 it seems counter-intuitive to have a tablet design that’s less mobile than a traditional laptop.

I even tried adjusting the power settings in Windows 10 but was only able to squeeze out another half hour out of the device with moderate use. I wouldn’t fancy myself a complex PC user, where most of my time is spent in Google AdWords on the Edge browser, Excel sheets and shifting between downloads from Google Docs and OneDrive. I also, occasionally watch a Netflix movie or YouTube content using either the browser or Windows 10 app MyTube, all of which has me scratching my head as to why the batter on my device performed so poorly.

Or, lack thereof. After using a Surface Pro for a few months, Lenovo Ideapad Miix 720, and even the crowdsourced Eve-Tech V tablet PC, I’ve found myself a fan of bio-authentication, unfortunately, the Miix 520 unit I received opted for none. There was no fingerprint reader or Iris Scan on the device I tested. Before I passed judgment, I thought perhaps I should check Lenovo’s site to see the omission was model specific but it seems at this point in time, the 520 wasn’t meant to walk this earth to make users log in any easier than before.

I know design is subjective and for something carrying the Ideapad monicore from Lenovo there may even be an unspoken understanding that power and price outshine most asethtic decisions, but there were some hardware choices that made it harder for me to truly enjoy the device. Placement of the speakers were ideal for use of the Miix 520 when it was being operated similar to a laptop on a flat surface but the minute it was in tablet mode, I found myself fighting with my own finger placement to get consistent audio quality.

But to be honest, earphone are what most people use anyway, and so did I, and that’s where my next complaint is directed. Headphone jacks on most 2-in-1’s are a continuous pain point for myself as most OEMs place them in the mid to top corners of the device which leaves a cord running alongside the device while in use and forces the user to do finger tight rope gymnastics when using the touch panel and listening to audio. The Miix 520 is no different in its headphone jack placement unfortunately.

Perhaps Microsoft refuses to share its magnetize pen solution with its partners but many seem to be going out of their way to adopt the most convolute alternatives to that rather streamlined approach. Lenovo has opted for a weird USB holster attachment that not only removes a port from use but is rather unsightly and requires an additional piece of easily lost hardware. Due to the ungainly solution, I found myself not even bothering with the pen unless it was absolutely necessary and even then, it was a quick signature or mark up and back to my bag for the pen.

And, once again, I’m reviewing a Lenovo product where the fan and cooling system is upfront and on constant display. When reviewing the Lenovo Ideapad Miix 720 the devices fan noise was beyond annoying. Using the Miix 520 compared to the 720 Miix is less annoying but still noticeably bothersome. The fans kick on during recharging, Office 365 docs being opened, Netflix app being opened, The Sims 4 being played, more than 4 tabs opened in Chrome or 6 in the Edge browser and any time it boots from sleep, however, other than those handful of useful times, you hardly notice the fan. For what it’s worth, the fans do help keep the Miix 520 cool to the touch most of the time.

The Miix 520 has a lot of good going for it and it shows when actually using the PC. A combination of RAM and Intel’s new processor enables users to fly around Windows 10 on this device. Multiple browser and tabs in conjunction with resource heavier apps such as Office 365, Gimp, FL Studio and the Spotify desktop app were no match for the Miix 520’s speed. As I continue to offset my workload to the browser I found I was twelve tabs deep across both Edge and Chrome with services such as Google Play Music, YouTube, Feedly, Microsoft Teams, Twitter, Planner, Power BI, Outlook.com and Sway opened before I noticed the slightest of lags in switching between them all.

I will continue to mark the patent Lenovo keyboard as stand out feature and on the Miix 520 it remains superb. The keyboard is made up of hard rubberized material that deflects stains, scratches, and marks with ease. I believe the Miix 520 keyboard is even more refined than the Miix 720 as it flexes less and doesn’t have the same trackpad/depression issues (when the trackpad register accidental contact due to depressions in the keyboard) that often occur with light detachable keyboards.

Key travel remains the same as most Lenovo laptops despite the keyboard being less than a quarter of an inch thick. The magnets in the keyboard are strong as well and help prevent accidental detachments. If there was a complaint to be had, I would have like to see the pogo pin arrangement work when the keyboard is flipped around. On my Surface Pro, I found the key to longevity of my keyboard is being able to flip the thing around where the keys are placed against the back of the device and the flat surface is exposed when using it more tablet friendly environments.

Even though the Miix 720 and 520 share the same watchband hinges, the 520 appears to go further back in degrees versus is sibling. I believe Lenovo said the 520 can go 150 degrees which is about as far the Surface Pro goes when testing the two devices side by side. Another personal favorite I enjoy about the Lenovo hinges are the placements which allow me to naturally rest my finger against them when in tablet mode. The cool metal the hinges are made of are a nice distraction from the relatively hot and humid days down here in Florida.

The performance of Lenovo’s Active Pen 2 technology has caught up quiet well to the Surface Pro’s performance for most everyday pen use. While the Active Pen 2 may not do tilt drawing as well as the Surface Pen, most of the pressure sensitivity is there as well as the reduction in noise and jitter. Unlike the Miix 720, the pen on the Miix 520 was a delight to use, especially since it seems Lenovo has figured out a way to significantly reduce input lag. The integration of Active Pen 2 and Windows 10 settings has been a godsend for remapping buttons or calling up specific OS features with just the click of a button.

The Miix 520 has some downside that would be deal breakers on their own but as an entire package, they’re a small penance to pay for power, speed and portability. OEMs are getting hip to how to package their 2-in-1’s and including the pen and keyboard allow for a lot of patience and forgiveness when encountering noticeable issues such as fan noise or device weight. For as little as $869, users get as close to a $1,400 Surface Pro experience as possible. In everyday use the Miix 520 is a solid device offering a great package for a reasonable price, however, for anyone spoiled by the Surface Pro or other feature packed 2-in-1’s, the Miix 520 misses the mark. I found the Miix is a recommended device for anyone in an office setting tethered to an outlet and looking to occasionally port the device to nearest conference room for a quick meeting.

Lenovo is getting eerily good at refining its 2-in-1 category but it still seems that it’s searching for that delicate balance of feature sets versus price and the Miix 520 has gotten the company pretty close to the mark.