Microsoft’s Mixer game streaming platform had been in trouble for quite some time now, but the company will finally pull the plug next month. The announcement was made on Monday during Apple’s much-talked-about WWDC introducing keynote, and it came as pretty shocking for Mixer streamers.

As it turns out, most Mixer partners didn’t get briefed about Mixer’s upcoming closure, and Mixer employees apparently learned about it just a couple of minutes before the announcement. It’s safe to say that most Mixer users and employees have shared a common sentiment of betrayal after hearing the bad news, especially since the Mixer team was still hard at work on new features that will never see the light of day.

Microsoft choosing to announce the sunsetting of Mixer this week isn’t completely random: The company’s new fiscal year kicks off in July, so Microsoft will now be able to reallocate resources previously spent on Mixer to other products. The announcement also came right after reports of racism and sexual misconduct at Mixer had just surfaced, though the decision to shut down Mixer has apparently been made some time ago.

If many doubted that Microsoft would continue to spend money on a platform that didn’t get any momentum, the news of Mixer shutting down was probably less surprising than Microsoft’s new partnership with Facebook Gaming. That’s right, Microsoft will offer Mixer streamers the possibility to easily switch to Facebook's game streaming platform, but the new partnership seems to be more about Project xCloud, Microsoft’s game streaming service launching later this year.

Mixer was born from a game streaming service originally named Beam that Microsoft acquired back in August 2016. At the time, the company explained that "This acquisition will help gamers enjoy the games they want, with the people they want, and on the devices they want.” In 2017, Microsoft integrated Beam into the Windows 10 Game Bar and the Xbox One OS, making it very easy to stream games on both platforms. With the Mixer rebranding came new interactive features like Mixplay and Controller sharing, and a co-streaming feature also allowed up to 4 streamers to broadcast their streams on one page.

It’s true that Mixer had some real killer features such as their proprietary FTL protocol, which made interactions between streamers and their audience even better due to lower latency. However, the competition eventually caught up on the latency front, and other Mixer features like MixPlay didn’t get a lot of traction. Microsoft also tried to promote Mixer by creating original content, but the company laid off most of its original programming staff in June 2019 to bet on high-profile streamers instead. This led to Microsoft signing exclusive deals with Twitch streamers such as Ninja and Shroud, but these personalities undoubtedly lost a big part of their audience by moving to Mixer.

As we’ve seen previously with Windows Phone or Google+, being a latecomer in a highly-competitive market is pretty much a recipe for disaster. We had seen signs showing that Microsoft had lost belief in Mixer in recent months: the company first removed the built-in Mixer streaming feature from the Xbox Game Bar on Windows 10, then a recent Xbox One update made it possible to completely hide Mixer from the Xbox One dashboard. There were also the high-profile departures of the two Mixer co-founders last year, plus a leaked internal video showing Mixer General Manager Shilpa Yadla trying to remotivate her troops in an obviously very challenging environment.

Back in April, a new study from StreamElements and Arsenal revealed that all game streaming platforms except Mixer saw massive growth in April, with 98% more hours watched year-over-year for Twitch. YouTube and Facebook Gaming also got a big boost from the lockdown caused by the worldwide covid-19 pandemic, while Mixer showed an abysmal +0.2% YoY growth. Other data also showed that Mixer had close to 70K concurrent viewers on average, while Twitch has 1.9 million. Mixer just never had a chance. 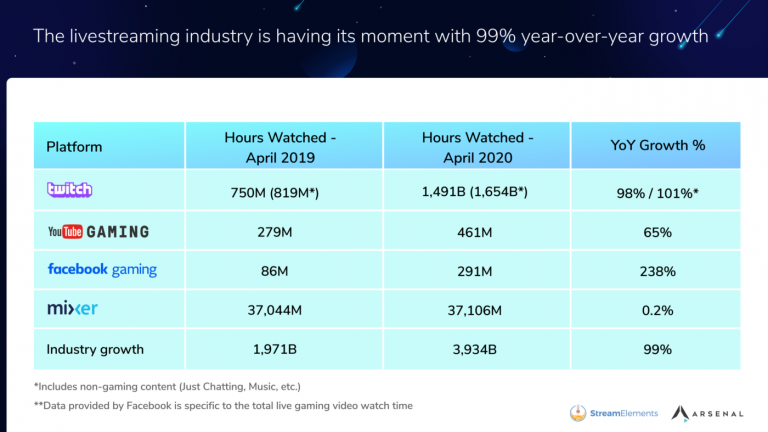 Having failed to elevate Mixer into a platform that can rival heavyweights from Amazon and Google, two companies that Xbox head Phil Spencer designated as Microsoft’s true gaming rivals, Microsoft had no choice but look for an honorable exit. "It became clear that the time needed to grow our own live streaming community to scale was out of measure with the vision and experiences that Microsoft and Xbox want to deliver for gamers now, so we’ve decided to close the operations side of Mixer and help the community transition to a new platform, the Mixer team explained on Monday.

While Microsoft may have been able to sell Mixer to another company, the software giant surprised many by announcing a new partnership with Facebook Gaming. "This is a key part of a broader effort that Xbox and Facebook Gaming are embarking on, bringing new experiences and opportunities to the entire world of gaming,” the Mixer team said on Monday. The last sentence makes it pretty clear that what Microsoft is really interested in is “new experiences and opportunities” made possible by Facebook’s massive platform.

At first sight, teaming up with Facebook, a company with a terrible reputation, doesn’t exactly seem like a smart decision. While Mixer streamers now have to possibility to transition to Facebook Gaming, it appears that most of them are flocking to Twitch instead. As a matter of fact, Twitch is the only alternative game streaming option on Xbox One right now, and the one that the Mixer team specifically recommended to use on the console after July 22 when Mixer will shut down.

So, why teaming up with Facebook while it’s clear that most Mixer streamers are moving to Twitch? If you’re reading this, you're probably thinking that Facebook is a creepy company that wants to know everything about you. But for many people, Facebook is almost a synonym to the Internet, just like WeChat is for Internet users in China. The company also gained some gaming credibility after purchasing Oculus back in 2014, and Facebook Gaming is actually a thriving platform. According to the aforementioned study from StreamElements and Arsenal, it showed a 238% YoY growth in April with 291M hours watched, which is much higher than the 99% YoY growth for the industry.

"Every month, more than 700 million people play a game, watch a gaming video or interact in a gaming Group on Facebook,” the Mixer team emphasized on Monday. Facebook Gaming is certainly not to be underestimated, and some high-profile Mixer streamers such as King Gothalion and Queen Eliminator have decided to move to Facebook Gaming. While Microsoft won’t force any Mixer streamers to move to Facebook’s platform, the terms of the deal are actually pretty good, with Mixer Partners being granted partner status with Facebook Gaming, with the ability to monetize their content right away. That’s certainly better than starting from scratch on Twitch or YouTube.

As much as losing Mixer hurt like hell, I cant express enough how excited I am about Facebook Gaming, I’m also just super motivated to grind again and I haven’t felt like this in so long.

Thank you for supporting me, and thank you FB partners for being so welcoming🥺😭

For Xbox One streamers, Xbox’s Major Nelson clarified that Facebook Gaming won’t replace Mixer on the console next month, and there are no plans for a Facebook integration in the Xbox One OS as of this writing. However, Xbox head Phil Spencer did mention on Twitter that Xbox One owners could soon get more streaming possibilities on the console. “We absolutely want to give gamers choice of where to stream from Xbox,” the exec said.

Facebook could be a great partner for Project xCloud

As Phil Spencer now sees Amazon and Google as Microsoft’s main competitors in the race to reach 2 billion gamers, Facebook already has that massive reach across the main Facebook app, Facebook Messenger, WhatsApp, and Instagram, four apps that each have more than 1 billion monthly active users. Despite Facebook’s bad reputation, the company could be a great partner for bringing Microsoft’s Project xCloud game streaming service in front of more eyeballs.

"Everything we’ve done to date at Xbox has been to meet players where they are and reduce the friction between curiosity and play as much as possible," explained Spencer. "Key to this vision is our Project xCloud technology, which we see delivering games to all kinds of screens and windows in your life, including those on Facebook,” the exec continued.

Just like Google is working on synergies between YouTube and its Stadia game streaming service, Phil Spencer teased the ability to seamlessly transition from watching a streamer playing a game on Facebook Gaming to start playing it in a heartbeat thanks to Project xCloud. "In the future, through the power of Xbox Live and Project xCloud, we see there being just one click between “I’m watching” and “I’m playing,” Spencer said. "We’re always testing new features and learning, and we’re excited to explore further as we look to debut click-to-play scenarios within the Facebook Gaming and Instagram communities.”

There are still a lot of unanswered questions about this new partnership with Facebook. First of all, Facebook Gaming is available on many platforms thanks to the web and mobile apps, but there's no dedicated app for Xbox One and other consoles as of today. Moreover, we still don't know if Project xCloud will be available on the web, like Google Stadia. We know that a Project xCloud app for Windows 10 is in the works, but the "click-to-play" scenarios that Spencer mentioned could really use an xCloud web app for convenience, unless the plan is to allow gamers to play xCloud games without leaving Facebook Gaming.

Anyway, even though the connections between Project xCloud and Facebook Gaming are still unclear, Microsoft made a pretty safe bet. Facebook Gaming is the fastest growing game streaming services right now, backed by one of the biggest social platforms on the Internet. And again, Phil Spencer did say that this partnership wasn't an exclusive one, so Microsoft is free to look at other opportunities to promote its xCloud game streaming service. This may not be what Xbox and Mixer fans expected, but it's a better plan than keeping wasting money on a platform that never reached the scale to become sustainable.