After June passed without any significant Xbox news, all eyes were on Microsoft’s Xbox Games Showcase yesterday. The company definitely had some pressure on its hands as back in May, the Inside Xbox livestream showcasing a couple of third-party Xbox games left many fans disappointed. Sony also held its PlayStation 5 reveal event in June and followed up with two critically-acclaimed PlayStation 4 exclusives, The Last of Us 2 and Ghosts of Tsushima.

Microsoft still remains the challenger on the road to the next-gen, but overall, yesterday’s Xbox Games Showcase was much more interesting than the May Inside Xbox episode. The company did keep its promise to only talk about games, though Halo: Infinite didn’t exactly meet fans’ expectations. Many Xbox enthusiasts were also surprised to not see gameplay for Ninja Theory’s Hellblade 2, which is one of the first-confirmed first-party titles to use Epic’s Unreal Engine 5.

Yesterday’s event was also a great ad for Xbox Game Pass, as pretty much all games showcased yesterday will be available for subscribers on day one. However, Microsoft didn’t do a great job at explaining which games would be exclusive to the Xbox Series X, especially since the company promised earlier that future Xbox Game Studios titles would continue to ship on Xbox One consoles. Just as it did after the May Inside Xbox event, the software giant once again had to clarify things.

The confusion about Microsoft’s cross-gen strategy

In an Xbox Wire blog post from July 16, Xbox head Phil Spencer emphasized that Xbox gamers wouldn’t be forced to upgrade to the Xbox Series X to enjoy the upcoming Xbox exclusives. “We want every Xbox player to play all the new games from Xbox Game Studios. That’s why Xbox Game Studios titles we release in the next couple of years—like Halo Infinite—will be available and play great on Xbox Series X and Xbox One,” the exec wrote.

Well, after reading Spencer’s bold statement, we were not exactly prepared to see that many first-party studios titles would only ship on Xbox Series X and PC: The list includes the next Forza Motorsport game, State of Decay 3, Rare’s Everwild and Obsidian Entertainment’s Avowed.

Future 1P titles are developed for Xbox Series X first. Not saying those games won’t ship on Xbox One, only that we are leading with Series X & each studio will decide what's best for their game/community when they launch.

Overall, this is not a great look for Microsoft, especially since the company said several times in recent months that its upcoming first-party games would be cross-gen titles. It’s good that Halo: Infinite, a launch title for the Xbox Series X will also ship on Xbox One consoles later this year, but the next Forza Motorsport game skipping Xbox One consoles entirely was definitely a surprise.

Still, the Forza trailer we saw yesterday, which was 100% captured in-engine, was much more visually impressive than the Halo gameplay sequence Microsoft showed at the beginning of the showcase. This led many Xbox fans to wonder if Microsoft’s much talked about cross-gen strategy for Xbox exclusives was actually holding next-gen games back.

Halo: Infinite was the first next-gen game that Microsoft unveiled two years ago at E3 2018. At the time, we learned that the game would use a brand new Slipspace engine created from the ground up by 343 Industries. The second cinematic trailer we saw last year at E3 2019 looked just as incredible, and it’s safe to say that everyone expected the game to be a great technical demo for the Xbox Series X’s superior architecture.

As video games fans surely know, the problem with the cinematic trailers that we see at E3 and other events is that they rarely represent the visual quality of the final product. Visual downgrades are almost always guaranteed, and Halo: Infinite is apparently no exception. You just have to look at official screenshots Microsoft published yesterday to see that this is not the next-gen showcase that Halo fans were expecting to see. 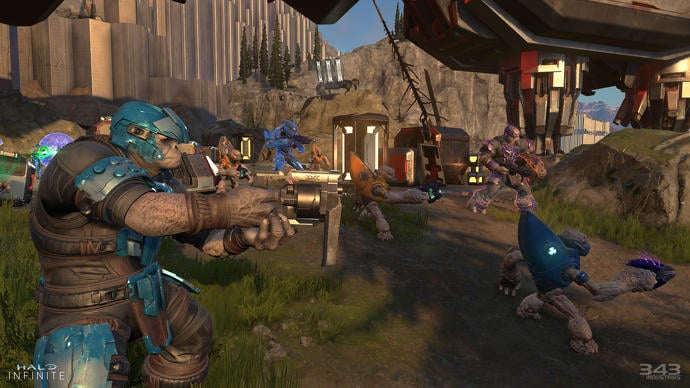 We did get our first look at Halo: Infinite’s campaign yesterday, and the gameplay looks really solid. 343 Industries emphasized that the Halo Ring players will explore was several times bigger than Halo 4 and 5 combined, and there’s no doubt that Infinite will be the most ambitious Halo game to date. However, it’s clear that Halo fans expected much more on the visual front.

A mini bad buzz began on the Internet after it was reported that the gameplay demo we saw yesterday was actually running on a PC instead of an Xbox Series X console. To add fuel to the fire, 343 Industries also confirmed that the Xbox Series X version of Halo: Infinite wouldn’t support ray-tracing at launch, though it will be added later with a free update. After Microsoft spent so many months insisting on Xbox Series X’s next-gen features including ray tracing and Variable Rate Shading, this definitely looks like a strange omission.

I wouldn’t go as far as saying that this first look at Halo: Infinite gameplay was embarrassing, though it clearly wasn’t a great demo for the power of the Xbox Series X. Many Halo fans compared Halo Infinite’s graphics to previous Halo games, and it’s true that the latest installment doesn’t seem to be a true leap forward. However, the game is still a work in progress, and the game that will ship later this year will hopefully be in a much better shape.

I sincerely hope these are not the graphics we will see in the final version of Halo Infinite.

Yesterday’s event was all about Xbox Games Studios titles, though Microsoft Flight Simulator was curiously absent. With the game shipping on August 18 on PC, I expected a real gameplay demo with a technical deep dive, followed by a release date for the Xbox Series X version of the game. None of that happened yesterday, and this is probably a big missed opportunity.

The new Flight Simulator game is developed by a small team in France that punches well above its weight. Indeed, developer Asobo Studios created a brand new engine for Flight Simulator, and the company also leveraged Bing Maps data to recreate most parts of our planet in incredible detail. Make no mistake, Flight Simulator is the most impressive next-gen game we’ve seen so far, and it’s pretty crazy to see what a small team has been able to achieve compared to a juggernaut like 343 Industries.

There were other first-party games missing from the Xbox Games Showcase yesterday including Wasteland 3, to be released next month on August 28. Age of Empires 4, which was announced 3 years ago, was also nowhere to be seen, and we didn’t get any information about the Age of Empires 3 remaster either. It’s true that yesterday’s event was mostly Xbox-focused, but after Microsoft successfully launched Xbox Game Pass for PC last year, I think it’s time for the company to talk more about its PC games.

Too many cinematic trailers, not enough gameplay

Except for the long Halo: Infinite gameplay sequence that kicked off yesterday’s livestream, the rest of the show didn’t escape the classic formula of E3 presentations, with a fast-paced series of cinematic trailers with almost no gameplay. Microsoft previously acknowledged that this format left Xbox fans quite disappointed after the May Inside Xbox event, but yesterday was definitely more of the same.

Rare’s Everwild and Obsidian’s Avowed both seem to be very early in development, and we still have no real idea of how their gameplay will look like. The same can be said about State of Decay 3 and the Fable reboot, which was Microsoft’s “one more thing” moment.

Is it really useful to reveal upcoming games so early when developers still have nothing concrete to show off? I think Microsoft could have used that time to show more of Halo: Infinite and other gamers coming very soon. As an example, Grounded and Tell Me Why, two games that will ship later this summer only got two average cinematic trailers with almost no gameplay sequences. If yesterday wasn’t the right moment to give us a deep dive, when will that be?

According to rumors, the August Xbox 20/20 Update could be when Microsoft announces the pricing for the Xbox Series X and reveals its low-cost Xbox Series S/Lockhart console. The company still has plenty of time left to talk about games ahead of the release of the Xbox Series X, but it’s unfortunate that the Xbox team didn’t spend more time yesterday to show off games coming very soon.

Microsoft is all-in on Xbox Game Pass, with some exceptions

This is a very big deal for Xbox fans, especially since Bungie previously had a marketing deal with Sony for Destiny 2. The game will also be enhanced for the Xbox Series X later this year, and the free upgrade will bring a 4K/60FPS mode to the next-gen Xbox.

Microsoft likely paid Bungie a good amount of money to get their flagship game and all of its DLCs on Xbox Game Pass for console and PC. As you may know, games coming to Xbox Game Pass usually do so without their DLCs, which need to be purchased separately. That’s going to be the case for Peril on Gorgon, the first DLC for The Outer Worlds, a game developed by the Microsoft-owned Obsidian Entertainment.

The Outer Worlds has been available on Xbox Game Pass since its launch last year, and know that Microsoft owns the studio behind it, it’s unfortunate that its DLCs will need to be purchased separately. This shows that Microsoft’s deals with game publishers (The Outer Worlds is published by Private Division, and Microsoft acquiring Obsidian Entertainment didn’t change that) can be inconsistent. CrossfireX is another good example, as its solo campaign developed by Remedy Entertainment won’t be included in Xbox Game Pass. However, the game’s multiplayer mode will be free-to-play.

Still, yesterday’s Xbox Game Showcase was definitely a great ad for the subscription service. Xbox Game Pass continues to offer incredible value to gamers, and it’s really something that Sony, Nintendo, or even Google Stadia may never be able to match. However, we’re still a bit worried about Microsoft’s ability to deliver great first-party games that will convince more gamers to subscribe. As a gamer developer, Microsoft is no longer the Halo/Gears/Forza company, but we have yet to see what the rest of the studios Microsoft acquired in recent years can bring to the table. So far, it seems that teaming up with third-party developers can be the way to go, as the new Microsoft Flight Simulator game is about to prove next month.