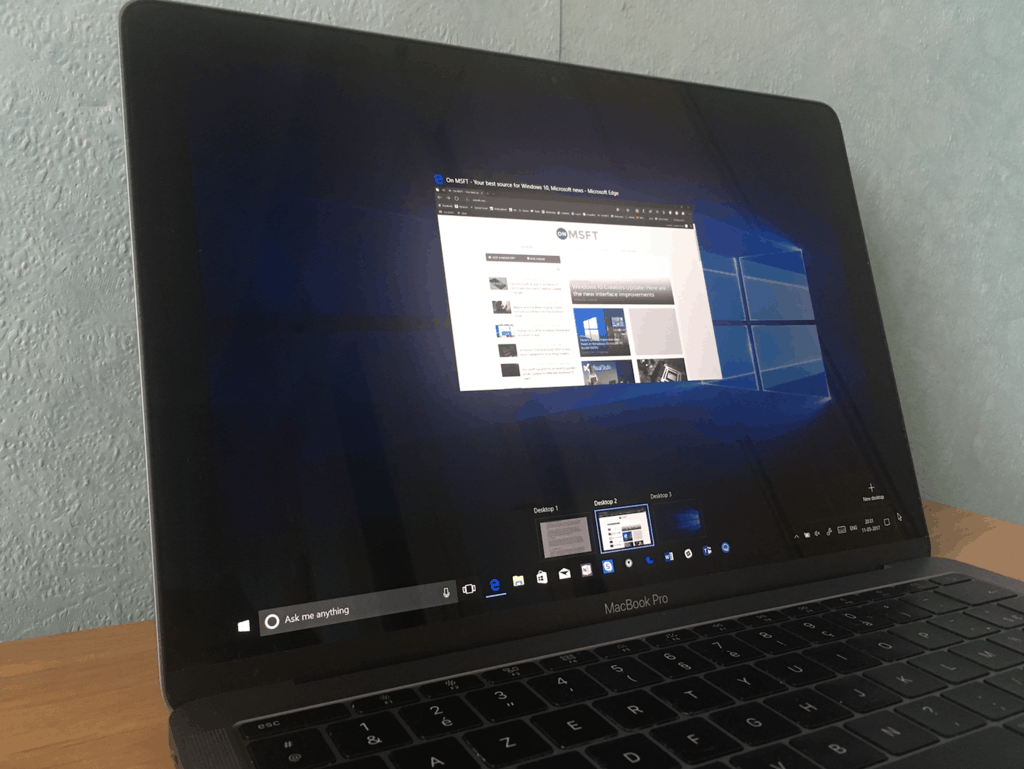 I have a confession to make: I've been a Microsoft enthusiast for a very long time and I'm writing for a Microsoft-focused website (and enjoying it), but I've been using a MacBook as my main machine for years. Yes, I do like Windows 10 and I regularly use it, I'm also very interested in what Microsoft is doing with its Surface line, but there is a catch: as of today, I feel like Apple's MacBooks are still better than any Windows laptops currently in the market, and I'm quite frustrated about it.

The thing is, I'm an old-school guy who thinks that classic laptops are better machines than the hybrid laptops or detachable PCs we've seen in recent years. I'm not sure that 2-in-1 devices are for everyone, especially for professional writers like me who just a need a solid machine without any compromises, distractions or gimmicky features.

I'm quite happy with my MacBook for now, but I still very much want to buy a new Windows laptop in the near future. However, I can't really find something that suits my need right now. Like I said, I'm not a fan of hybrid laptops and I feel like both the Surface Pro 4 or the Surface Book are not for me. My dream machine would be a high-end laptop from Microsoft (maybe a Surface laptop?), but unfortunately I'm not sure if this really in the company's plans.

MacBooks are the best of both worlds for me

There is no denying that Windows 8 and Windows 10 have allowed PC manufacturers to bring some much needed innovation to the PC market in recent years. However, it's still interesting to see that Apple didn't follow its competitors: the company's MacBooks are still pure laptops with no touchscreens, while new products like the iPad Pro are quite different than Windows 10 2-in-1s, using a mobile OS and lacking PC features like a trackpad or USB ports. And so far, keeping MacBooks seperate from iPads seems to work well for the company.

I bought my first MacBook back in 2010, at a time when I became frustrated with the lack of good Windows laptops on the market. I used to have a 15.4-inch Sony VAIO laptop which I used to like very much, but it was quite heavy and loud and had very poor battery life. Compared to this old beast, the 13.3-inch MacBook I bought was much more portable, completely silent and had an all-day battery life. At the time, this was truly night and day for me. I also fell in love with the big trackpad, the handy finger gestures and the very smooth inertial scrolling were a joy to use.

In many ways, MacBooks are the best of both worlds for people looking for great laptops: they're quite expensive, but you pay for nice, durable hardware and a really good operating system. Even better, if you're not a fan of macOS you can use Bootcamp to install Windows 10 on a separate partition, and it works great. It's also worth noting that just like iPhones, MacBooks retain their value much longer than Windows laptops, meaning that you can usually resell them for a very good price.

Still, I've wanted for a long time to buy a new Windows laptop to replace my aging MacBook, and I contemplated purchasing Microsoft's Surface Book last Fall. Eventually, I settled for one of Apple's latest MacBook Pros, and I'll tell you why.

My gripes with the Surface Pro 4 and Surface Book

Just like Apple, Microsoft is pretty slow to iterate, but I don't really have a problem with this. Until 2015, Microsoft used to refresh its Surface Pro line every year, and the Surface Pro 4 was a nice iterative update following the already solid Surface Pro 3. I was quite impressed by both the Surface Pro 4 and the Surface Book, but the well documented sleep issues (aka the "hot bag syndrome") that Microsoft finally fixed after several firmware updates were a huge disappointment for me. MacBooks are not perfect, but I don't think this lack of quality control is something that could have happened with Apple.

More importantly, I felt like both the Surface Pro 4 and the Surface Book were not better than my old MacBook. With its 12-inch screen, the hybrid tablet is too small for me. I'm also not a fan of the top-heavy design, the kickstand and the detachable keyboard. In the end, I'm not looking for a tablet to replace my laptop, thank you very much.

As for the Surface Book, I don't think this is really the "ultimate laptop" that Microsoft has been advertising. While it's obviously not as compromised as the Surface Pro 4, it's quite heavy (3.34 lbs, or 1,516 g) and thick (0.90”, or 22,8mm at its thickest point) for a laptop. That's partly because of the crazy hinge, which makes it pale in comparison to slim ultrabooks like the HP Spectre. Additionally, I'm not and artist and I'm not looking for a tablet, so the "Clipboard mode" and "Draw mode" are completely useless for me.

In the end, I'm just looking for the best Windows ultrabook. Yes, I'm aware that there are some good ones from third-party manufacturers, but as a Microsoft fan, I want a real ultrabook from Microsoft. And I'm guess I'm probably not the only one to wait for that, right?

Will Microsoft ever release a true laptop?

Last October, Microsoft unveiled the Surface Book i7 with Performance Base instead of a proper Surface Book 2. We recently heard that Microsoft could hold another hardware event this Spring, but it's not clear if a Surface Book 2 and a Surface Pro 5 could make an appearance. Additionally, a previous report from DigiTimes explained that Microsoft could be working on a new “Surface clamshell” laptop type device, which could make sense to bring prices down and set a clear separation with the Surface Pro's 2-in-1 design.

Over the past few months, Microsoft also started to heavily target Mac users with a MacBook trade-in program and new Surface Book marketing. I believe a real Surface laptop could be much more appealing to hardcore MacBook users who have become disenchanted by Apple's latest hardware efforts. Those who agreed with Tim Cook mocking bad toaster-refrigerator combos, but who feel like Windows 10 is slowly but surely becoming better than macOS.

However, the classic laptop form-factor may well be too boring for Microsoft to bother with. So far, the Surface brand has always been associated with forward-looking, category-defining products, and the company may will continue to look at the future rather than the past. I can't wait to see what Microsoft has in the pipeline this year, and ex- Surface GM Brian Hall recently tweeted his excitement about it:

Boy, I know surface stuff I can't share. I keep being asked. But I hope you respect I won't. It's just right not to. But it is the sht.

Anyway, if Microsoft doesn't release the Surface laptop of my dreams this year, I'll happily keep using my 13.3-inch MacBook Pro. It has everything that I need (except full-size USB ports. And a discrete GPU. And a touch screen. And Windows Hello. And of course, that cool, shiny Microsoft logo!).