Microsoft’s 2018 year in review: The good, the bad, and the ugly

As 2018 is coming to a close, today is the perfect time to look back at everything Microsoft achieved and missed over the past 12 months. This year has been a very good one for Microsoft, and as of this writing the company remains the most valuable US company ahead of Apple. And even though Steve Ballmer’s Microsoft allowed Apple and Google to dominate the mobile market, Satya Nadella’s Microsoft is a completely different beast that managed to find a lot of other sources of growth.

Despite great financial results quarter after quarter, there has been some less shiny areas this year. I’ll do my best to highlight the good, the bad and the ugly for Microsoft in 2018.

The cloud and enterprise stuff

As expected, Azure and Office 365 have continued to grow very fast this year, and we expect this to continue next year. Even though Azure is booming, keep in mind that it still has a very long way to go to catch up to market leader AWS. Microsoft is well aware of this reality, and the company’s first acquisition of 2018 was Avere Systems, a company specialized on hybrid cloud infrastructures.

If Office 365 remains a very important business for Microsoft, the company has continued to heavily promote its “Microsoft 365” offering this year. Microsoft 365 is a complete enterprise package that includes Windows 10, Office 365, and Enterprise Mobility + Security, and we should continue to hear a lot about it in 2019.

Microsoft Teams, the company’s Slack competitor, also reached new milestones this year. 329,000 organizations are now using Teams worldwide, including 87 of the Fortune 100 companies. According to a recent study from SpiceWorks, Microsoft Teams is expected to experience the biggest growth collaborative chat apps over the next two years. 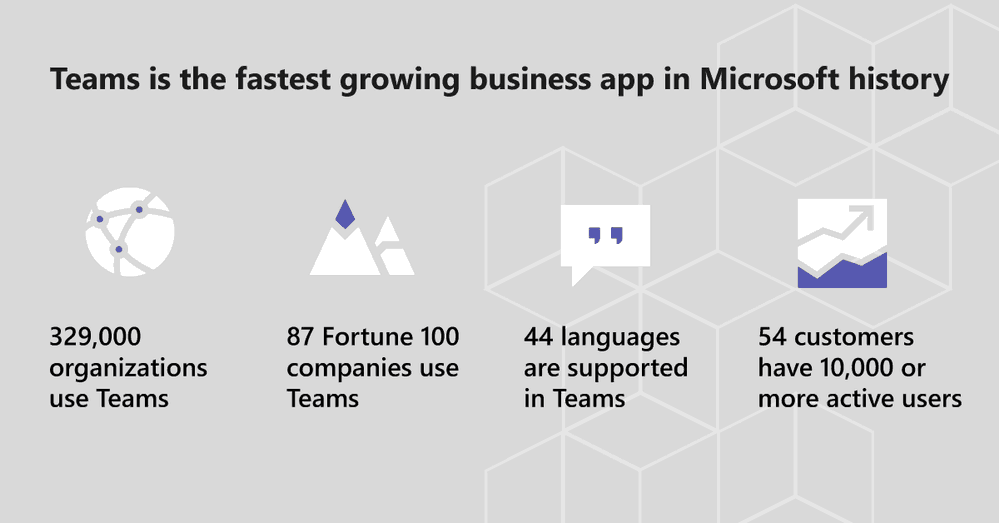 Microsoft released several new Surface models this year including the affordable Surface Go, the Surface Pro 6 and the Surface Laptop 2. Since its launch back in August, the 10-inch Surface has already become the fourth most popular Surface device according to AdDuplex, right ahead of the Surface Pro 6.

Surface is now a billion dollar business for Microsoft, and the company also became one of the top five manufacturers of PCs in the US market this year. With the launch of new accessories like the Surface Headphones, Surface is slowly but surely becoming a lifestyle brand with premium products that can easily rival with Apple's. When you remember that the first Surface device was launched only six years ago, that’s quite a big achievement.

Even though there is a lot to like about Surface devices, they also received criticism for being hard to repair, and the lack of USB-C ports on the Surface Pro 6 and Surface Laptop 2 is really hard to justify in 2018. Hopefully, this is something that Microsoft will finally address with the next generation.

Windows Phone is still dead in 2018, but that’s not really a problem since Microsoft is now fully supporting iOS and Android devices. Android has obviously become Microsoft’s mobile OS of choice these days, and the company managed to create great synergies between Windows 10 PCs and Android phones thanks to apps like Your Phone and the Microsoft Launcher.

It will likely take years for Microsoft to fix the Xbox’s exclusive games problem, but the company proved this year that they're finally ready to address this issue. The Redmond giant acquired several game studios this year including Playground Games (Forza Horizon 4), Undead Labs (State of Decay 2), Ninja Theory (Hellblade: Senua’s Sacrifice) and Obsidian Entertainment (Fallout: New Vegas). Let’s not forget about The Initiative, a brand new studio led by former Tomb Raider boss Darrell Gallagher who has been hiring top talent this year.

A lot of new exclusive games are hopefully in the pipeline, but in the meantime Xbox continues to lead on the services front. All first-party Microsoft Studios games are now available on day one on Xbox Game Pass, and the subscription service has also welcomed many great games from Bethesda, Square Enix, Capcom and more this year.

Whether you’ve been with us since the beginning or just joined, thanks for playing with us this year. Find your next favorite game in January! pic.twitter.com/Rm6kZRvFYM

Microsoft also pushed hard to make gaming more inclusive in 2018, starting with the Xbox Adaptive controller. Inspired by an internal hackathon, the accessible controller has been ranked one of the top inventions of 2018, and we hope that the video games industry will follow Microsoft’s lead in the near future

Thanks to Microsoft, cross-platform play is also no longer a taboo subject. After months of bad buzz, Sony finally caved and enabled cross-play between PS4 and Xbox One gamers on Fortnite. It’s still not clear if other games will follow, but game developers like Blizzard and EA have already expressed interest in bringing support for cross-play in their games.
Crossplay

The botched releases of the Windows 10 April 2018 and October 2018 updates will definitely leave a mark. Microsoft having to pause the release of the October 2018 Update due to a file deletion bug was a quite PR disaster for the company, and hopefully a learning moment as well.

Despite having millions of beta testers in the Windows Insider program, there’s an ongoing feeling that the quality of major Windows 10 updates has been decreasing over the years. This has forced Microsoft to be more cautious during the rollout of the October 2018 Update, which as of this month may be running on less than 10% of Windows 10 PCs according to AdDuplex.

Maybe Windows 10 is in need of an "iOS 12" update: less new features, but a bigger focus on stability and consistent design. And yeah, I still think that the dark theme on macOS Mojave is much better than the one on Windows 10. 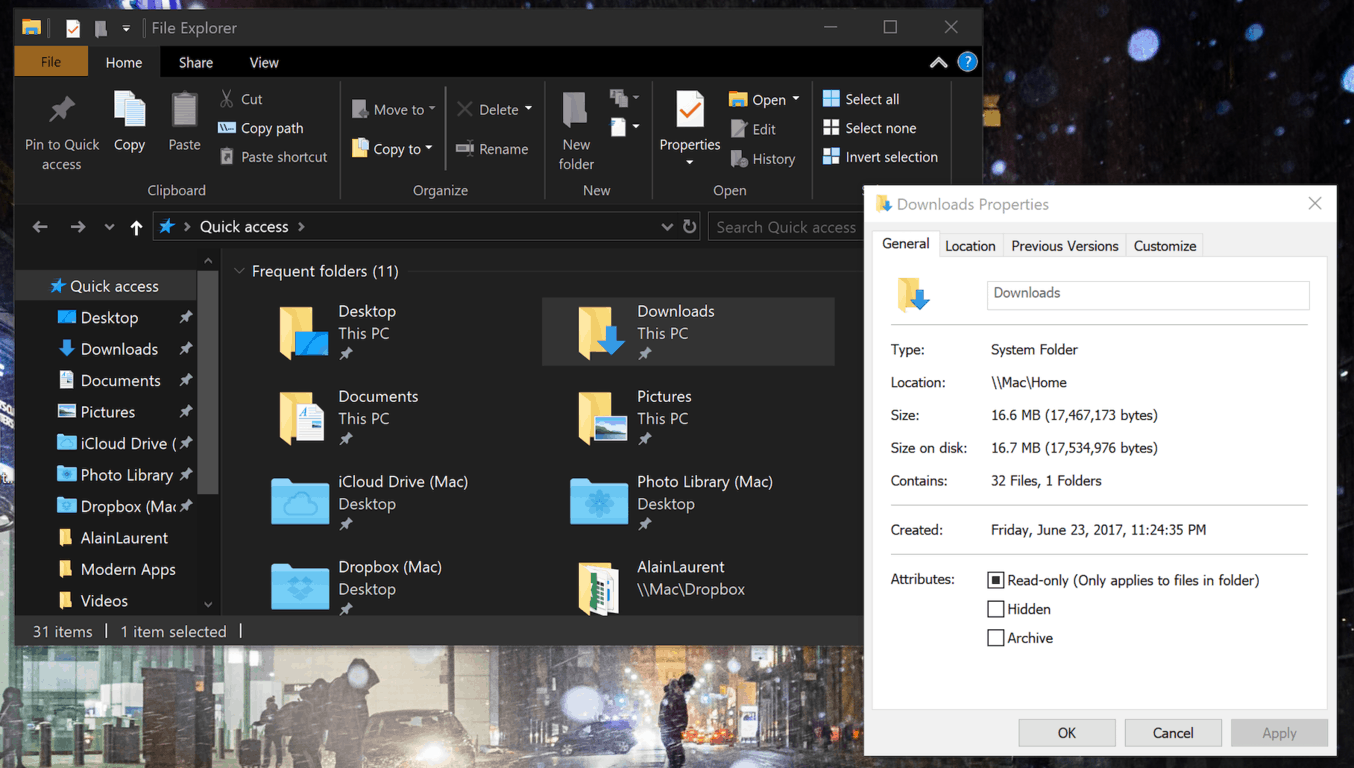 Microsoft Edge was supposed to be the company’s modern, lightweight browser that can finally replace Internet Explorer, but so far Windows 10 users have continued to prefer Google Chrome, Firefox, and other alternatives. The slow pace of updates has always been a big issue, but websites not being optimized for the EdgeHTML engine was an even bigger problem. Well, Microsoft has finally given up on EdgeHTML, and the company plans to launch a Chromium-based version of Edge next year that will also run on macOS and older versions of Windows.

This should be good news for Edge users, who will get a better browser that is compatible with all Chrome extensions, but it’s definitely not great news for the web. It was pretty bad when all websites were optimized for Internet Explorer, and we could soon end up in the same situation where Chromium and Google Chrome become the de-facto standard. Microsoft's decision will leave Mozilla and its Quantum engine remain the last alternative to Chromium-based browsers and Apple's Webkit-based Safari, and that's not a great look for the web in general. 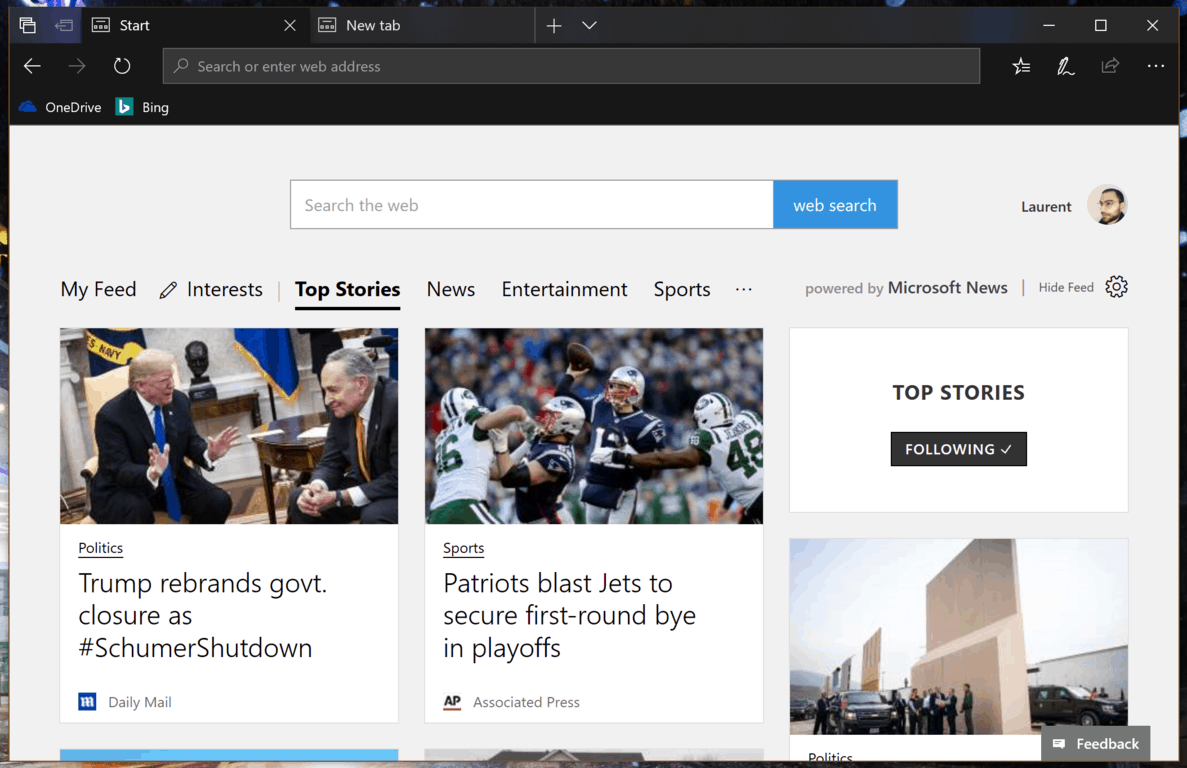 We’ve seen Microsoft’s OEM partners launch the first Windows 10 on ARM PCs this year, and the first generation has been quite disappointing. All these Qualcomm Snapdragon 835-powered (a smartphone chip) have been overpriced, offering disappointing performance when running emulated Win32 apps.

Things got slightly better with the second generation devices using the more powerful Qualcomm Snapdragon 845 chip, but Windows 10 on ARM PCs still don’t offer a good enough price/performance ratio for most consumers. Things should change once developers start to compile their apps for the ARM64 architecture, and hopefully we’ll see Google Chrome and other browsers run natively on Windows 10 on ARM next year. In the meantime, you should probably keep your money and wait for new models powered by Qualcomm’s upcoming 8cx chip.

Microsoft let its OEM partners lead the charge this year, but we're waiting to see the company launch its first Windows 10 on ARM Surface device. Intel reportedly blocked an ARM-based Surface Go this year, but it's probably a good thing that Microsoft avoided another Surface RT situation with a compromised product.

The Microsoft Store and UWP/PWA Apps

With app developers neglecting Microsoft’s UWP platform, the company was expected to fill the app gap on the Microsoft Store by automatically adding Progressive Web Apps (PWAs) using the Bing crawler. However, this didn’t really happen this year: So far, Twitter seems to be the only developer that cares about PWAs, though the Twitter PWA probably isn't as good as other third-party clients.

Ironically, the best apps you can find on the Microsoft Store today are bridged desktop apps like iTunes, Spotify or Microsoft's own Office desktop apps. Earlier this year, the company announced that it was halting work on its Office Mobile UWP apps, which probably tells a lot about the general disinterest for the UWP platform. 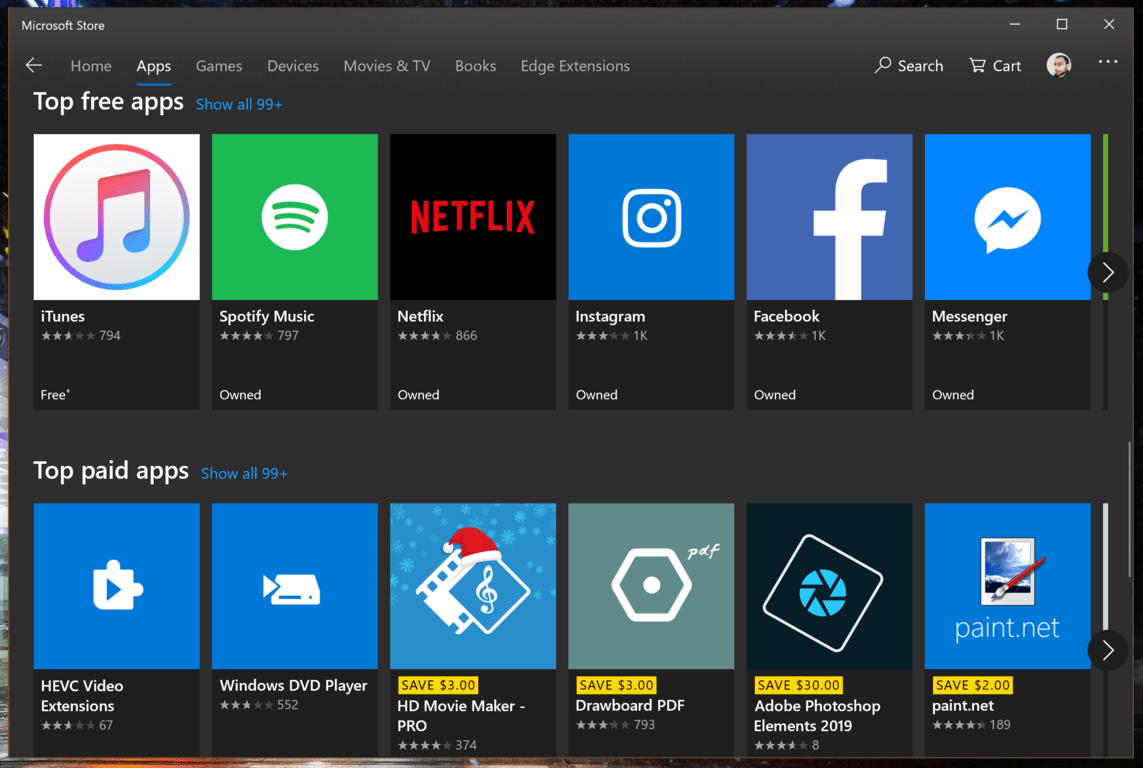 At this point, Cortana has pretty become the new Windows Phone. The digital assistant still has its fans, but it's being ignored by most consumers, developers, and Microsoft. Despite launching in 2014, Cortana is currently only available in 13 regions worldwide, and the Cortana mobile app is still pretty much a US/UK affair. This is a big missed opportunity for Microsoft, and it's almost like the digital assistant has been PC-focused for too long.

While Amazon and Google have released many smart appliances over the years, we've only seen Cortana show up on the Harman Kardon Invoke speaker and the GLAS smart thermostat. We doubt that other manufacturers will consider integrating Cortana into their products in the future, and they really don't have to: Microsoft teamed up with Amazon to integrate Cortana with Alexa, and Amazon's digital assistant is now available on Windows 10 PCs as well as Xbox One consoles.

Following the departure of head of Cortana Javier Soltero last month, it's still not clear what Microsoft plans to do with its digital assistant. Cortana's main purpose seems to be its ability to access Outlook.com/Office 365 data, but now that Alexa can check your emails for you, maybe Cortana is about to lose all of its exclusive features. 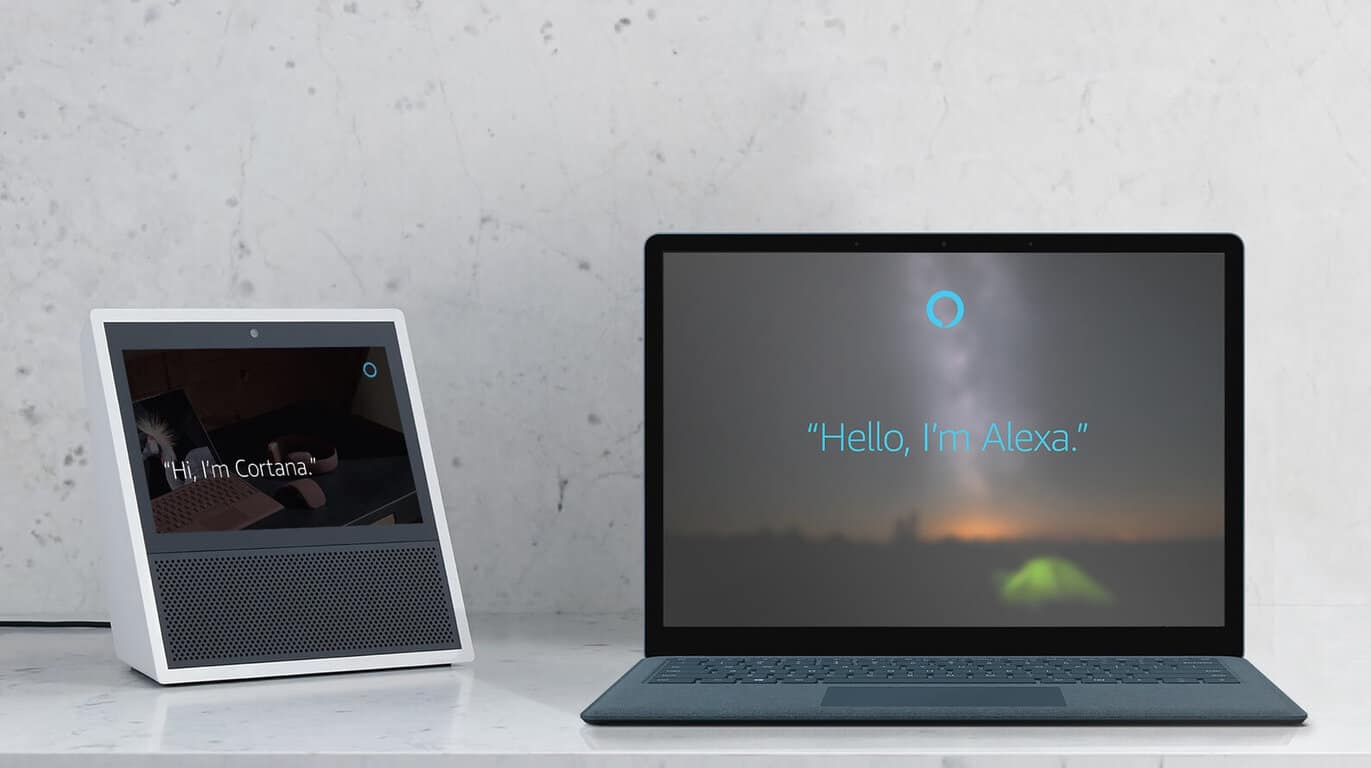 Microsoft really accomplished a lot this year overall, even though from a consumer point of view, it can look like Windows 10, Cortana and other products are fading in the background. It's true that Windows isn't as important as it was 10 years ago, but the company still cares a lot about software. Because Redmond now makes its own hardware, the company can't afford to stop innovating on the software front.

2019 should be an even more interesting year for Microsoft fans thanks to new Surface and Xbox hardware, a new Hololens headset, and maybe a Windows-based foldable mobile device. There's also Project xCloud, the company's new game streaming service that will work on all devices, including phones and tablets. Last but not least, after the company acquired LinkedIn and GitHub, we can't wait to see what will be Microsoft's next big acquisition. See you in 2019 for even more Microsoft news!

Is 2019 the Year of Azure for Microsoft? It is for OnMSFT.com!