Here’s what Microsoft Teams desperately needs that Slack already has

Over the past few months, I’ve written about Microsoft Teams extensively for our Office 365 coverage here at OnMSFT. With its popularity on the rise, I’ve even compared Teams to Slack side-by-side in more ways than one. There’s no doubt, I am a big defender of Teams, and there’s a lot that I really like about the collaboration service, but there is also a lot that I don’t like.

Yes, Microsoft has plenty of cool stuff planned for Teams in the future, but as someone who uses both Slack and Teams on a daily basis across two different jobs, there’s a lot that Microsoft could learn from when looking at Slack. Here’s a look at what Teams needs that Slack already has.

A Microsoft Store and MacOS App Store version of the app 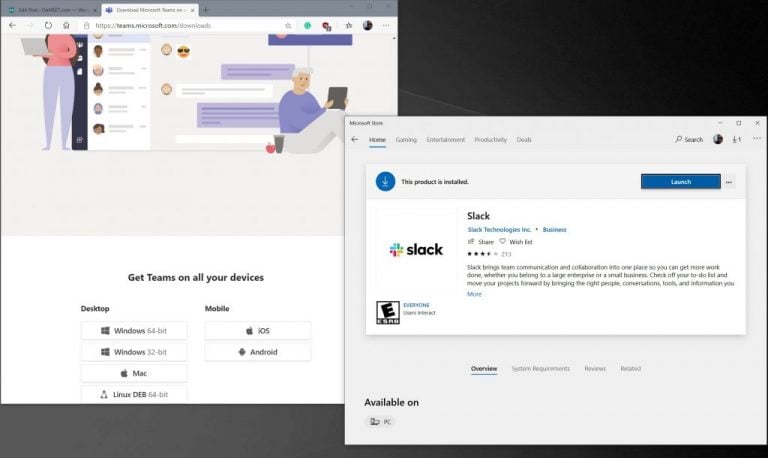 Many months ago, Microsoft experimented with a version of Teams that was downloadable through the Microsoft Store on Windows 10. However, it was only available on Windows 10S devices, and since then, the app has been pulled. That means the only current way to download and use Teams on Windows is to run the executable file on Windows or use it through the web.

This is a big difference from Slack and is the primary area where I think Teams needs a big improvement. Currently, Slack can not only be found in the Microsoft Store, but it’s also available on Apple’s MacOS App Store. That means it’s much easier to download the app and get up and running with it when you boot up or buy a new device. Updates are also much easier to manage, too, as you can update Slack right alongside the other apps in your respected OS. Granted that Windows is a Microsoft product, it’s quite a shame that there is no native Windows 10 app for Teams. 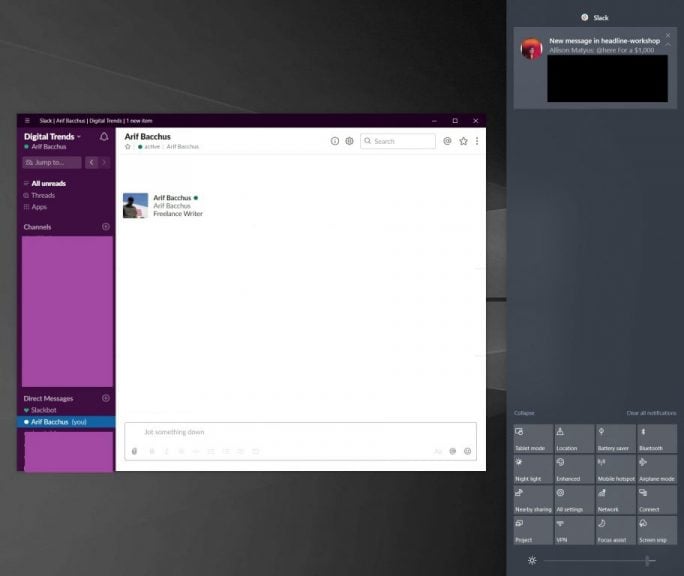 I’ve said before that notifications in Microsoft Teams are much cleaner when compared to Slack. You have one “Activity” area that shows you your replies to messages, likes on messages, mentions, and even your own activity. However, there is one problem, as that is just the in-app notifications. Currently, notifications outside of Teams are a huge mess.

Other apps in Windows 10, such as Slack, integrate with Toast Tiles and the Windows 10 Notification and Action Center. If you get a reply to a message or any other action in Slack, you’ll get a notification that appears in the corner of your screen, and then right inside Action Center, even if you missed its momentary in-app pop-up. Currently, this is something that Teams does not do. It has its own way of showing notifications, in the bottom corner of the screen. It bypasses the Windows notifications system in favor of its own, and that’s a huge shame. Again, Teams is a Microsoft product, and it doesn’t even play nice with Windows 10’s own features.

Support for signing in and switching between multiple accounts 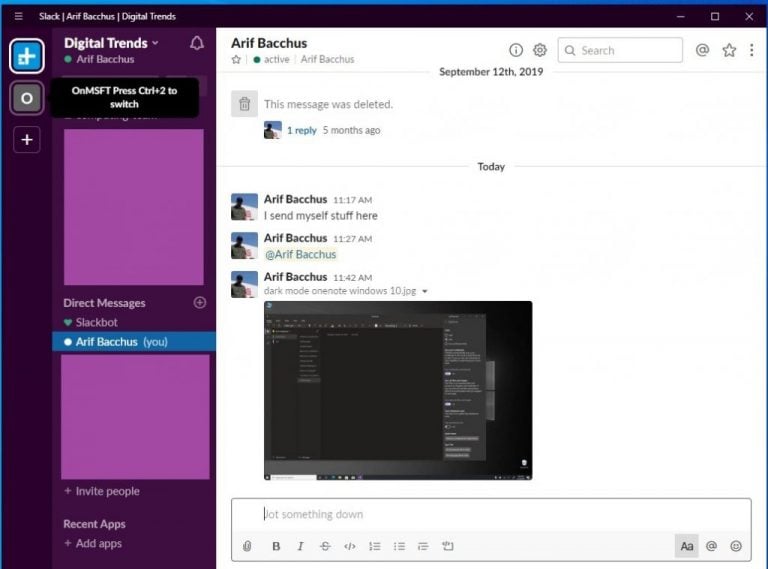 Even though Slack and Teams are used by millions of people on a daily basis, some of those people use collaboration services from multiple and different accounts. For instance, you could be signed into Slack for one job, and then switch it over for another job,  without having to sign out. This is one of the most controversial areas of the Slack vs Teams debate, and it’s where Teams desperately needs to learn from Slack.

Currently, with Slack, you can easily sign out and switch between workspaces with a sidebar that appears to the side of the app. This is something that isn’t at all possible in Teams. In fact, it has been requested by many users since 2017, and Microsoft has yet to put it to action. That means someone who has multiple jobs that use Teams will have to keep each separate. Typically, that means signing into one instance of Teams on the web, and another through the app. It’s quite a shame that this has to be used as a workaround and you can’t switch between accounts with the touch of a button. 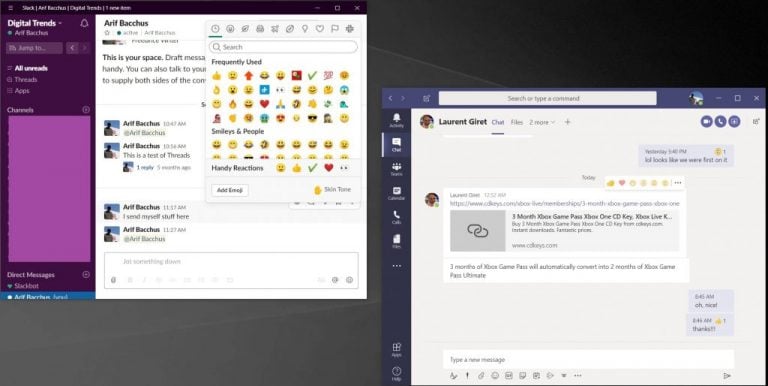 These days, emojis are everywhere, even in the workplace. You use them as simple ways of reacting to messages to send a quick and efficient point. Personally, I love the thumbs up emoji (just ask my editor,) and I was quite happy when Teams expanded its emoji reactions to six. Sure, you can use a wide range of emoji in a message, but in Teams there are only six available for quick reactions; “thumbs up,” “love,” “sad,” “angry,” “surprised,” and “angry.”  These emojis do get the job done, but when compared to Slack, it’s really behind.

On Slack, you have an endless way of reacting to messages. You’re able to click an “add reaction” button and choose from a library of emojis. There’s even a search box that lets you find the one that’s just right for your situation or thought. And, if admins allow it, you even can upload and create your own custom emoji. At my other job, we have an emoji with our company logo. A copy editor on the team even tells us to reply with our own emoji of choice, so he knows when an important message has been seen. Emojis are great, and its yet another place where Teams needs improvements.

The ability to chat with yourself 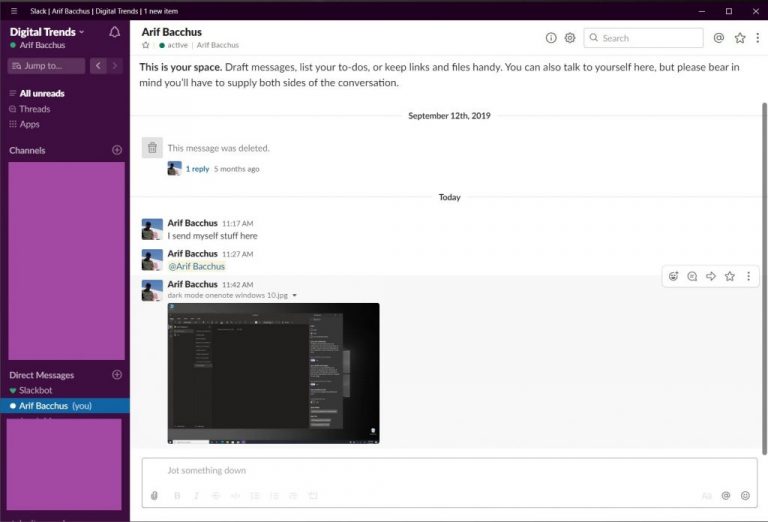 Finally, there’s the ability to chat with yourself. This is something that I use constantly with Slack. It lets me have my own in-app space to make notes, leave images and lists. I find it an excellent way to transfer files between my devices too, such as screenshots or images I use for my stories. It’s a feature that isn’t available in Teams, and I have no idea why. Perhaps Microsoft wants users to go with OneDrive, Outlook, and its other products instead, but having s apace to chat with yourself is quite convenient, and I do hope one day it comes to Teams too.

…And so much more!

These are just a few features that I think Microsoft Teams desperately needs that Slack already has. As Teams becomes more popular, Microsoft really needs to listen to feedback from the community and build a better app. Features like private channels, multi-window capability, more integrations with Outlook and Teams, are all on the way soon. However, to make Teams the perfect solution, Microsoft might as well need to focus on the basics first.